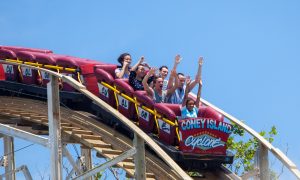 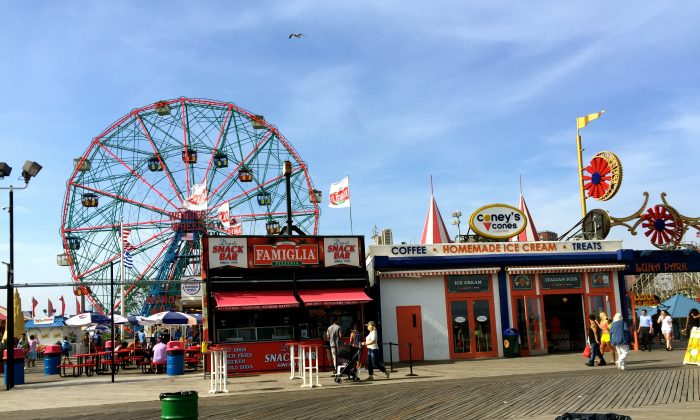 Of course, there is nothing lovelier in this world than its natural wonders.  But lets give our fellow humans a bit of credit.  There is, after all, so much forgotten enchantment in the manmade.

Writer E. B. White understood the magic of county fairs, amusement parks, and carnival rides.  He once wrote, “I see nothing in space as promising as the view from a Ferris wheel.”  I’m not sure whether Mr. White ever made it to Coney Island in New York City, but if he did, he would have been struck by the same wonder that it brings to its guests every year.

Coney Island led the country in carnival attractions from about 1880 to the start of World War II.  Imagine being an immigrant in the late 1800s.  Expecting to be welcomed to the new land by the notoriously triumphant Statue of Liberty, your eyes would instead fall on the colossal Coney Island Elephant, beckoning you to explore New York’s other exotic treasures.

In 1905, visitors to the park dressed in their finest dresses, suits, and hats.  Today, this is obviously not the case.  The modern tourist wears whatever he or she deems appropriate for a day on the boardwalk, and they add even more bursts of color to the boardwalk’s whimsical rides and attractions.

I ordered my very first Coney Island chilidog under the vibrant green canopy of a hotdog stand called “Nathan’s,” and I ate it while mesmerized by the famous red and yellow streaks of the Wonder Wheel.

Each of the shiny painted carnival rides constantly tasted the salty winds of the Atlantic Ocean, just as they would have during Coney Island’s heyday.  I guess that no matter how much an enchanted space gets updated and refurbished, it will always breathe in the air of its surroundings.  Coney Island is lucky to have such a nautical neighbor as the Atlantic.

As I made my way down the boardwalk, I was perfumed with the smell of salt water on one side and cotton candy on the other.  The juxtaposition of salty and sweet, of natural and manmade is what makes Coney Island the magical getaway that it is.

In spite of all its enchantment, Coney Island is not free of the clutter that makes its way to an amusement park’s pavement.  If you do venture to this tourists’ treasure, you can expect to see everything that makes a carnival what it is—both the good and the bad.  But clear your mind and look past its flaws.  Coney Island, after all, is more than 100 years old.

Coney Island is lucky to have such a nautical neighbor as the Atlantic.
Don’t close yourself off to a little exploration.  There is an old fashioned treasure in almost every element of the boardwalk.  In a modern building labeled “Carousel” there is the loveliest assortment of painted horses and organ music.  It is like finding a pearl inside of an oyster.
Related Coverage

Would You Ride an 88-Year-Old Roller Coaster?

Order a chilidog, ride the Ferris wheel, and smell the winds of the Atlantic.  The magic of Coney Island can take you back in time if you let it.

Chelsea Scarnegie, from the Chicago area, has a degree in writing. This post can also be found on the Thistle Magazine blog.