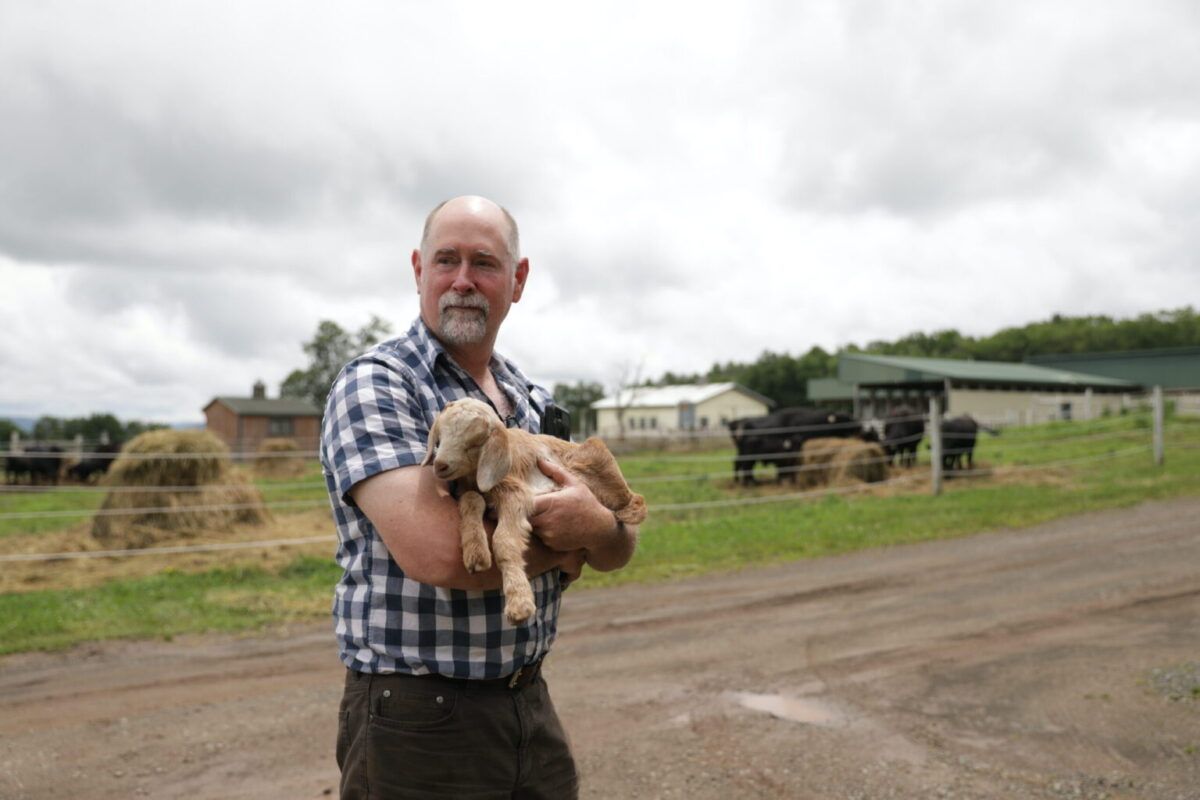 Patrick Rider didn’t set out to run a livestock farm that supplies meat to fine dining restaurants and grocers. He simply wanted to provide healthy options for his family. “I didn’t want my family eating industrial food,” he said.

In 2003, Patrick and his wife, Thanya, began purchasing farmland in Meredith, a sleepy town in Upstate New York, nestled within the Catskill Mountains. Today, they own 400 acres and lease another 1,100. Patrick’s family has lived in the region for eight generations. In his childhood, Patrick’s chores included cutting hay, but he didn’t grow up raising animals.

At one time, Patrick had a career in consulting that brought him to Mexico, where he met Thanya. As a couple, they decided to settle down in the lush, quiet area of the western Catskills where they now reside. When the Riders purchased the property, it was an empty field. They built the structures by hand and set everything up from scratch. From the beginning, Patrick resolved to grow vegetables and fruits without chemical pesticides. To this day, the farm’s livestock are also raised without antibiotics or hormones.

Patrick handles the animals with care. During a visit one July afternoon, he was preparing to move about a dozen cows to new pasture, but as the female cows began calling their calves, something suddenly spooked the animals—they didn’t want to budge. After some thinking, Patrick decided it was best to leave them be. He also noticed that a few cows were walking oddly, likely because they had lame legs. Sometimes they accidentally step into holes in the ground, burrowed by woodchucks, and hurt themselves, Patrick explained. He decided to leave those animals in the pen so they could get medical checkups.

At first, Patrick had only planned to produce enough food for his family, but as neighbors and restaurants kept inquiring about his products, the farm grew and grew. Today, Greenane Farms raises about 250 grass-fed Angus cattle in addition to pigs, chickens, quails, turkeys, goats, and sheep. The meat products are sold to restaurants and wholesale markets and are also available to neighbors via the farm store. Meanwhile, the produce goes to a local community-supported agriculture program—and into the farm restaurant’s offerings.

A Mexican Restaurant in the Catskills

The restaurant’s menu is composed of Thanya’s family recipes. There are dishes from her hometown of Mexico City and other places that her family hails from, such as the Baja region near California, and Hidalgo, the central Mexican state.

Family is part of the business at Greenane Farms, and 14 members of the family are employees. Cousins, nephews, nieces, and even Patrick Jr., Patrick’s 6-year-old son, all help out at the farm and restaurant, from feeding the animals to waitressing. Thanya said that while there are challenges to working with family, she treasures how everyone puts heart into their work. Everyone is “part of the project, part of the dream,” she said. In this part of rural New York, where there aren’t many Latin American families, many patrons experience traditional Mexican dishes for the first time while seated at the farm restaurant.

Thanya feels a big sense of responsibility in educating locals about the cuisine. She also values opportunities to “show pride about where we come from.” The most rewarding part of the endeavor is when people tell her they enjoy the food, she said. Some regular customers drive from one or two hours away to have dinner there. The restaurant, which is only open from May to November, is situated within a restored barn that was built in the late 1700s.

The Catskill Mountains are within view of the restaurant’s outdoor seating. On a clear day, the blue skies and verdant scenery make for an idyllic landscape. On a given evening, there may be a tractor parked in front, or one might find the Rider children and their relatives running around adorably dressed in Greenane Farms T-shirts with name tags attached. Eating at the restaurant is like being invited to a home-cooked meal. All meat and nearly all produce—save the tropical ingredients such as cacti, limes, and avocados—come from the farm.

The restaurant’s specialty is a dish called “the volcano,” which originates from the state of Jalisco. It’s served in a molcajete (a traditional stone mortar made of volcanic rock) that arrives sizzling and overflowing with a variety of meats and vegetables—such as house-made chorizo, cactus, scallions, queso blanco, rice, Yukon potatoes, and jalapeño peppers. The ingredients sit in a bath of tangy salsa verde made with tomatillos. The chorizo is a highlight, piquant and spicy from guajillo peppers, but the meat is heftier than store-bought sausages—perhaps because it comes from heritage pigs.

Thanya and her sisters also prepare a mole according to their family recipe, a labor-intensive task that takes two days. More than 30 ingredients go into the sauce, which is served with rice and a roasted Cornish hen. Thanya hopes that one day her children can take over the restaurant. “We’ll keep it simple,” she said.