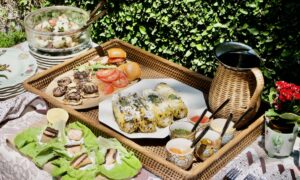 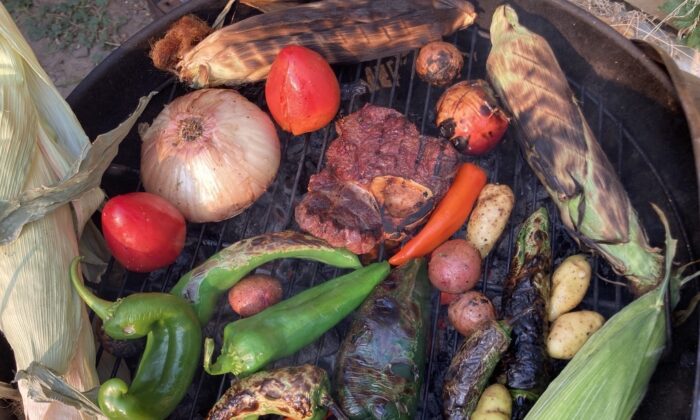 The cool weather of fall is a great time to gather around a warm grill, have a cookout, and make an amazing autumn stew from the leftovers. (Ari LeVaux)
Recipes

Green Chile on the Grill

Early fall was my favorite time, in part because the end of another hot summer always brought a sweet relief, but mostly because of a certain aroma that wafted up and down the Rio Grande Valley this time of year. The large-scale roasting of green chile fills the air with a magic pungency that grounds you to that arid landscape as autumn foliage and cider do in New England.

And then there is green chile the main course. A New Mexico green chile stew is brothy and nuanced, like the evening breeze after a monsoon rain.

But while roasted green chile peppers and the delicious foods they elevate are central to its identity, New Mexico hardly has a monopoly on growing, roasting, and preparing green chile. There’s nothing about the local soil or the rain or anything else that makes New Mexico green chile intrinsically better than green chile grown in New Jersey.

The key difference is that a farmer will get a better yield in Hatch, New Mexico than in Duluth, Minnesota. But the most important thing—more important than where it was grown or what variety—is simply that the chile be harvested at the proper time. Otherwise, the flavor will be off.

Green chile is, by definition, an unripe chile. Left to their own devices, all peppers on earth will eventually turn red, just like every maple leaf. The trick is to harvest the chiles just before they start to turn red. Since they are all green until that point, the only way to tell if the chiles are ready to harvest is by tasting. Alas, most farmers outside of New Mexico don’t seem to know what a green chile tastes like.

If it has splotches of yellow or red, that’s fine. In fact, they have a word in New Mexico for when you mix red and green chile together. They call it “Christmas.”

When I put green chiles on the grill, it’s for one of three reasons. Roasted green chile freezes really well—a lot better than fresh peppers. In addition to the freezer bag, roasted green chiles are additionally protected by a skin that slips right off when you’re ready to use it.

The cool weather of fall is a great time to gather around a warm grill, have a cookout, and make an amazing autumn stew from the leftovers. Don’t add herbs, either as a garnish or in cooking. No oregano, no cilantro. The green chile fills that niche.

First, make the marinade: In a large bowl or pot, mix together the liquid aminos, olive oil, garlic, salt, and pepper. Add the potatoes, onions, tomatoes, and meat to the marinade and set aside.

Get the grill hot. I use hardwood briquets, which burn quickly and add a smoky, exciting note of urgency to the process.

Place the corn cobs along the perimeter of the grill, and roast the chiles on the hot middle, turning them as soon as they blister. Keep an eye on the slow-cooking corn on the edge, turning as necessary. When the chiles are blistered but not charred all around, remove them from the grill and place them in the pot with the marinade and cover with a tight-fitting lid. This step, called “sweating,” allows the green chile flavor to fully develop and makes the peels come off easier.

Add the tomatoes, potatoes, onions, and meat to the grill (or do it all at once if your grill is big enough or your batch size is small enough). Don’t let anything burn, but let it all brown and get covered in grill marks; you don’t need to worry about cooking anything all the way done. As each item is done, add everything, including the corn after shucking, back to the marinade along with the chiles, and cover, so all the ingredients sweat together.

Cut the meat off the bones and into bite-sized chunks. Cut the corn off the cobs. Add the meat and the potatoes to the bottom of a large pot—I use one with a perforated insert, like you’d use to make pasta. Then add the insert, and fill it with the bones, tomatoes, apples, onions, and corn cobs. Add the remaining marinade, and bring to a simmer. Cook until the meat is tender. While it cooks, peel, seed, and chop the roasted green chile.

Remove the insert, leaving a brothy soup with chunks of meat and potatoes. Serve in bowls, garnished with green chile, corn, and chopped onions.