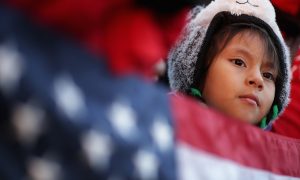 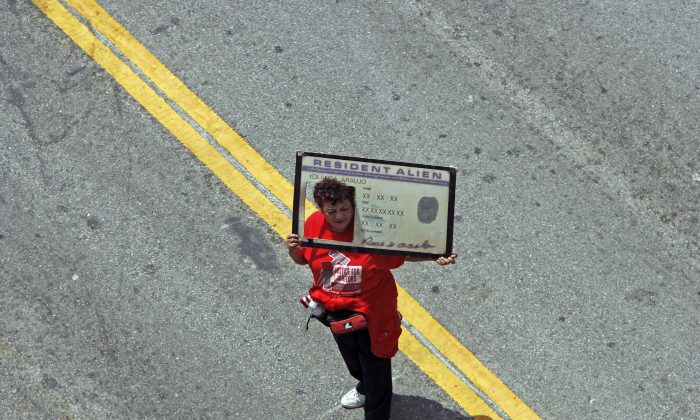 A protester holding a banner that looks like a United States green card walks down Broadway Street in the downtown Los Angeles Tuesday, May 1, 2007. (AP Photo/Kevork Djansezian)
Life & Tradition

Adrien Lucas Ecoffet had a dream. Since his early teens he wanted to become an American. Growing up in Bordeaux, France, he would practice his American accent and learn about American culture. He even placed a huge American flag in his room.

After interning with Quora, an online question & answer social network, in San Francisco, he grew confident he could actually make it in U.S. Thus, in October 2012, he applied for the Diversity Immigrant Visa–the Green Card Lottery.

One tedious on-line form filling process and seven months later, the results were in.

“I was absolutely convinced that I would win, because I felt like I so deserved to,” Ecoffet wrote in a Quora post. “I can be delusional like that.”

On May 1, 2013, he woke up and the first thing he did was checking online the status of his application. And there it was:

“Dear ADRIEN LUCAS ECOFFET, You have been randomly selected for further processing,” the message read. “Selection does not guarantee that you will receive a visa because the number of applicants selected is greater that the number of visas available.”

“Wait… Have I won?” he described his taught process. “Is all that legalese a way of letting me down easy?”

After all the excitement, the uniform language just seemed too lackluster to be true. He did win the lottery, but the process was far from over.

So what happens next? This is where the process gets tricky.

The Diversity Immigrant Visa (DV) program randomly pics 50,000 applicants from countries underrepresented in the United States and grants them a shot at permanent residency. If more residents have emigrated from one particular country to U.S. in the past five years, then such country is granted less winners in the green card  lottery. Countries with over 50,000 people emigrating to U.S. a year are not eligible at all. If you’re from countries like Mexico, Jamaica, Canada, or China, you don’t even have to try.

But even when you think you won the lottery, you may not want to celebrate just yet. There’s a series of hoops to jump through.

The first thing you do is check for scams. The U.S. Government never sends out emails or mails winners to notify them. If you get such a notification, it is a scam. The only way to learn that you’ve won is to check this website.

Also, applying for the lottery is free of charge and no one can guarantee you a priority in the program. Anyone offering so is probably a scammer. Some websites charge for help with filling out the application, but there’s plenty of help online for free. Like this YouTube video walking you through the application while soothing your nerves with Tchaikovsky’s Flower Waltz.

Are you even Eligible?

This is really something a person should check before even applying for the lottery. To get the visa, you need to provide documents proving you finished high school or have two years of a solid job experience in the past five years. Vocational high schools don’t count and the job needs to be higher-skill. Think accountant or mid-level manager, not electrician or carpenter.

Having a serious criminal record can also thwart the process. And as always, one shouldn’t be a national security threat, meaning a suspected terrorist.

Race to the Consulate

After you have truly won the lottery,  the real race begins. You need to apply for the visa, get an interview, and receive the visa by September 30 of the next year. Otherwise your lottery ticket will expire.

Having more than a year seems like plenty of time, but it’s not so easy. You need to fill out an online application and gather up to a dozen documents needed for the visa interview.

Moreover, the government actually pics many more winners than there are available visas. It can be over twice as many.

Ecoffet received a number over 30,000, landing him an interview date around May 2014. That is about year and a half after he applied and just five months before the deadline.

But by then he was already working full-time with Quora and the company was helping. “I am getting appropriate legal help with my immigration situation, which is a privilege only a tiny minority of my fellow DV lottery winners have,” he reported in March 2014.

Having the application in order can make a significant difference. Even after the visa interview, the consulate can take months to make a decision. And if it doesn’t do so before September 30–then there goes the opportunity.

“Winning the DV lottery is a very complex and confusing experience, but it is also one of the most wonderful things that can happen to a person,” he summarized. “A green card generally takes years to obtain and has a tremendous value that isn’t measured in dollars, but in freedom.”

This article is reference material and should not be used in substitute for legal advice.