Great Performance and Message of a Greater God

'Eyes couldn't keep up with the beauty' 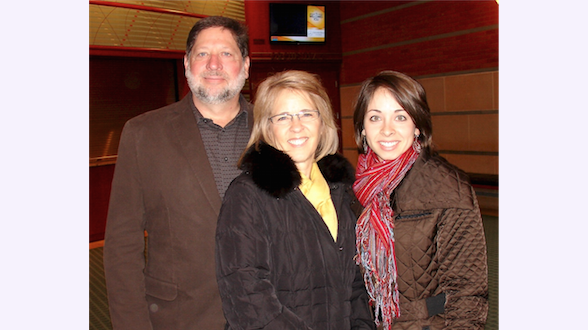 Ray and Catherine Markley with their daughter, Mary, enjoy Shen Yun Performing Arts at the Aronoff Center for the Arts on Feb. 28, 2015. (Ying Wan/Epoch Times)

CINCINNATI—”Thanks for the great performance,” said Ray Markley to the Shen Yun Performing Arts Touring Company, which performed at the Aronoff Center for the Arts on Feb. 28.

“China was once known as Shen Zhou—The Divine Land. This profound name describes a land where deities and mortals coexisted, and a belief that the divine transmitted a rich culture to the people of the earth,” states the company’s website.

The mission of Shen Yun is to revitalize this glorious culture and its associated wisdom, values, and morals. This culture was almost completely destroyed due to the more than 60 years of communist rule.

Mary, a nurse, found this idea very interesting—that Shen Yun is more than just a show. It aims at keeping the culture alive.

“A great performance, … and a great message,” said Mr. Markley. He considered it a message about a higher standard of living, involving “a supreme being [and] believing in a supreme God as creator,” he said.

That message “makes me rejoice that there are other truths worldwide [where people] believe what I do,” he said.

“I agree very much. It was beautiful because of what it represented,” said Mary.

I was “appreciating the message of the greater God—Creator—displaying himself in all the beauty [which] has been lost over the years by … government propaganda not allowing true worship,” he said.

“This is very inspiring,” said Mrs. Markley. She was encouraged to see that God, in his role of the founder, is still being carried forward, and that He is still being revealed to people, as this performance made clear.

Along these same lines, Mary said, “Nature is very beautiful to me because it displays the glory of God. The show today displayed much of nature—all the beautiful colors that came together. All of the physical movement was very natural, graceful, and beautiful.”

“So, all of that together, just to me, showed me more of the beauty of God,” she said.

Mrs. Markley was impressed with “the graceful flow of the music—The physical performance all just flowing together, and my eyes couldn’t keep up with the beauty that they displayed.”

Many audience members have agreed that Shen Yun is synonymous with beauty, be that in its choreography, colorful costumes, mystical digitally animated backdrops, dancers, or its storylines.