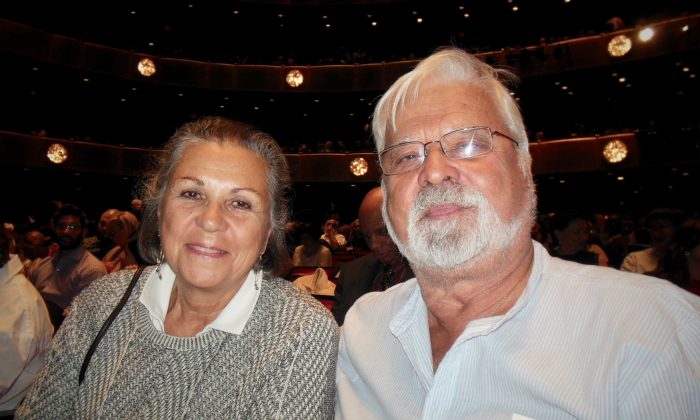 NEW YORK—Former president of AutoDesSys, Dr. Chris Yessios, was amazed by the multitude of colors that appeared on stage when he saw Shen Yun Performing Arts for the first time. He attended the performance with his wife at The David H. Koch Theater at Lincoln Center on Jan. 15.

“I just enjoy the image, the colors, the optics,” Yessios said. “I like the colors of the dresses, more than anything else.”

Yessios was the founder of the 3-D modeling software company that created form·Z, which is used by designers around the world. He was also the director of the Computer-Aided Architectural Design (CAAD) Graduate Program at Ohio State University.

The New York-based Shen Yun is the premier classical Chinese dance and music company. They travel the globe with six equal-sized companies that are set to perform in over 100 cities this season.

The company’s costume designers draw from China’s 5,000 years of culture, as well as styles from different ethnic groups around China. The designers stress harmonic balance and contrast when choosing colors, with the objective to present this traditional culture that is divinely inspired and to create a consummate stage effect, according to Shen Yun.

Yessios also said the dancing made him feel peaceful and relaxed.

He added that it is a pity the performance cannot be shown in China.

“Too bad they can’t show that in China, so I don’t like that,” he said.

Like Yessios, many Shen Yun’s audience members are surprised when they hear from the emcees that Shen Yun can’t perform in China today. This is because the Chinese Communist Party (CCP) sees traditional Chinese culture, which is deeply rooted in Buddhism, Taoism, and Confucianism, as its greatest rival. Through the Cultural Revolution, which occurred between 1966 and 1976, the communist regime attempted to eradicate traditional culture and replace it with Mao Zedong’s way of thinking and style of discourse.

Ancient relics and antiques, calligraphy and paintings, classic books, and scriptures were burned, while temples and statues were smashed to pieces. From that point on, Chinese culture was never the same again.

For more than a decade, Shen Yun Performing Arts has tried to revive authentic traditional Chinese culture and bring it to the world through performing arts. Yessios’s wife, Alexandra, said she was really happy Shen Yun is able to preserve the customs, designs of traditional outfits, and the art of ancient China.

“The colors, the dance, the zest, the performance, everybody is very powerful [in] the way they present the different scenes and emotions,” she added.