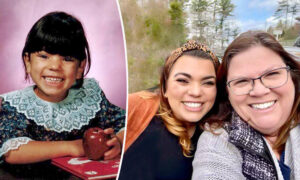 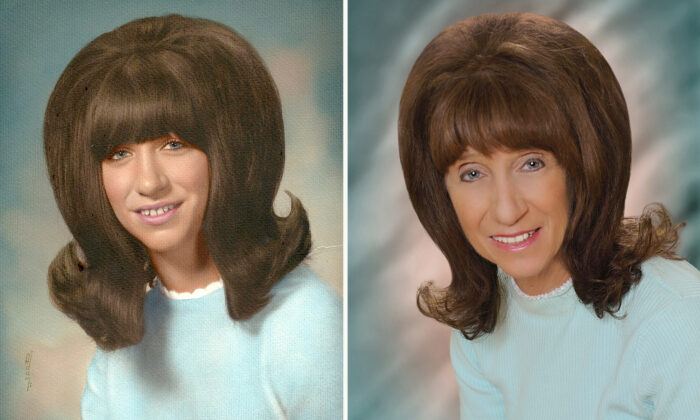 An Indiana grandma has recreated her high school graduation photos, including her iconic 60s flip hair, 45 years after they were first taken.

Jan Ellis, 69, finished school in 1969 and commemorated the occasion with a special photo shoot.

Jan agreed and visited the salon to have her hair dyed and coiffured into the iconic pumped-up 60s style.

She also bought a black pencil skirt and sweater from a charity shop that matched her graduation day outfit, and her brother shot the snaps in the same style.

The result is an incredibly accurate replica of her original photos—despite decades in between.

Grandmother Jan said: “At first I thought he was crazy, but then I thought, why not?

“I was pretty much the same size 45 years later as I was when I graduated. I am so blessed.”

She graduated from Taylor High School in Center, Indiana, in 1969 and had a professional snap taken by a local photography studio on the school grounds.

Jan said: “The part of my graduation ceremony that I remember was everyone seemed quite surprised that I did what I did.

“No one really said anything one way or the other to me. They probably shook their heads and had a lot to say like ‘wow she’s a brave soul!'”

After decades of the photo sitting in their mother’s home, in October 2014, Ed visited his sister and suggested she remake the photo.

The next day, she visited a hairdresser with her senior picture and asked her to cut her hair to that length and dye it the same color. Then, she and Ed visited a studio in Kokomo, Indiana, and recreated the moment that smiling 17-year-old Jan left her school days behind.

“Anything for my brother. He’s the best,” Jan said.

Ed said: “I have got the original photograph as I’ve always loved it. Jan’s not too fond of it but humors me. I love her dearly.”

Jan said: “When I first saw my photo it was a little surprising, because I didn’t feel like I was prepared to be able to fix my hair the way I wanted, because I was in an unfamiliar environment.

“But, overall, I was happy that my brother talked me into doing something that I would have never done on my own.

“We didn’t grow up together, and this project that he asks me to do ended up being such wonderful moments and memories spent together.”