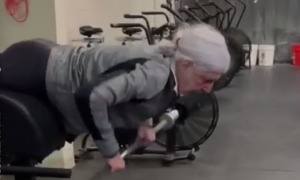 Video: Girl and Great-Grandmother Sing Together

It’s always tough visiting elderly loved ones who aren’t as mobile as they used to be and failing hearing can be an even bigger challenge – but this granddaughter didn’t let her Great Grandmother’s hearing stand in the way of a beautiful moment.

As they sit together in a quiet room, the granddaughter begins to sing a hymn. She has a beautiful voice, and everyone in the room falls quiet to listen. Then, halfway through the hymn, grandma joins in for the chorus, and a big smile lights up the granddaughter’s face.

The hymn is How Great Thou Art; a Christian hymn with its roots in Sweden. It was originally written as a poem by Carl Boberg in 1885, and then was translated into German, then Russian, and finally to English by missionary Stuart K. Hine. Hine added two of his own verses to the hymn.

How Great Thou Art ranked second after Amazing Grace on a list of favorite hymns in a survey by Christian Today magazine in 2001.

“You have a beautiful voice, grandma!” she says when the hymn is done. Her name is Olivia Erway, and despite her beautiful singing voice, this is the only video she has uploaded to her YouTube channel – such a shame!

Watch the video to see Olivia’s beautiful singing and hear as her Great Grandmother sings along!