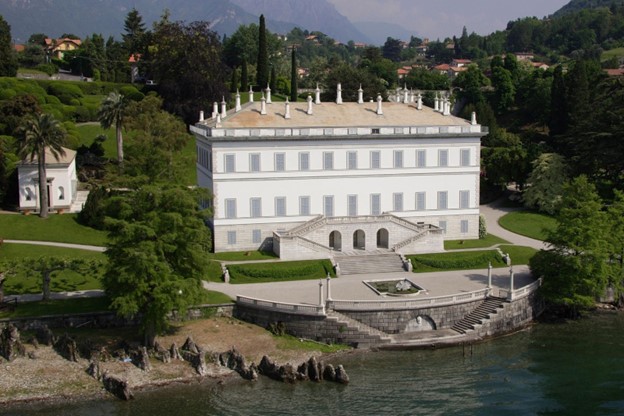 Villa Melzi has been declared a National Monument. The exterior double staircase rises up to the main floor and frames three arched doors that provide passage to the villa’s lower floor. The rusticated base and large textured brick-like forms establish a relationship with the ground, while providing contrast and hence highlighting the soft white walls. This treatment extends vertically along the corners, known as coins. The coins form a frame to the subdued façades comprised of a soft repetition of rectangular windows. The roof is adorned with chimney spires. (MT–Afb/Giardini di Villa Melzi)
Arts & Tradition

Larger than life: Art that inspires us through the ages
BY James Howard Smith TIMEJuly 3, 2022 PRINT

Villa Melzi d’Eril is elegantly placed on the waterfront of Lake Como amid a rare garden,  just 31 miles from Milan in Lombardy, Northern Italy.

In the early 19th century, Francesco Melzi d’Eril, vice president of the Italian Republic founded by Napoleon, envisaged the villa as a summer retreat. It is accompanied by a family chapel, an orangerie that served as a greenhouse, and a lakeside pavilion. These were set in a wondrous garden with rare exotic plants, sculptures, and an Asian haven, evoking memory and imagination of far away lands.

The Villa was designed by Swiss-born architect, painter, and sculptor Giocondo Albertolli, and built between 1808 and 1815. The neoclassic style draws upon the classical roots of ancient Greece, having a simple form with a subtle decorative expression. The soft, gentle tones of the white walls with light gray trim and blue window shutters complement the atmosphere of the lake with the lofty clouds that often float by before dissipating among the mountains beyond.

At the northern end of the estate sits an Asian garden with a variety of species including Japanese maples. Within the Asian garden, paths meander around a pond, cross a bridge, and continue up the hillside. Plateaus along the hill give views over the gardens and lake beyond. Seen from the lake, the hillside gardens form the backdrop for the villa.

While the town of Como is filled with many lively hotels and villas, Melzi stands by the waters edge amid a gentle setting. Her graceful presence connects with the spirit of Lake Como, and has timelessly continued to touch guests and passersby for over 200 years.