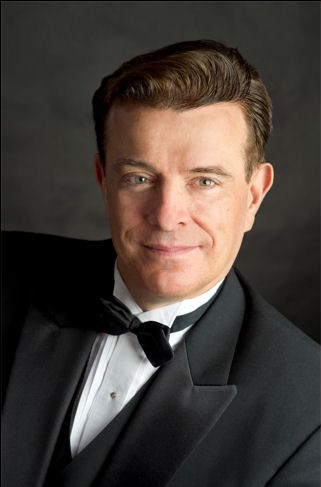 Vince Giordano was the host and leader of his band, the Nighthawks Orchestra and they brought the ebullient sound of jazz to Town Hall to celebrate the holidays.

The band got off to a swinging start with a rollicking rendition of “Jingle Bells.” Then vocalist Molly Ryan came out in a red dress to sing Louis Prima’s “What Would Santa Say?”

The Xylopholks are a novelty jazz group that dresses up in animal costumes while they play clarinet, bass and xylophone. They first performed George Green’s “Charleston Capers” and returned later with a vocalist, Benjy Fox-Rosen, for a delightful rendition of Moshe Oysher’s “Drei Dreidel,” reminding the audience that Chanukah was also being celebrated.

There was quite a bit of Ellington on the program, starting with “Sugar Rum Cherry,” from his and Billy Strayhorn’s arrangement of Tchaikovsky’s “Nutcracker Suite.” Dancers Heather Gehring and Lou Brockman contributed a film noir dance, reminiscent of Fred Astaire and Cyd Charisse in the “Girl Hunt” number from “The Band Wagon.”

David Johansen aka Buster Poindexter brought his gravelly voice to “Is That You Santa Claus?” and later “Take a Stick and Knock Down Your Brother” (a spirited Caribbean piece).

The Nighthawks Orchestra played with their usual verve. The standout performer was trumpeter/singer Bria Skonberg. She played trumpet open, muted and then with a plunger and also sang sweetly on”Santa Claus Is Coming to Town.” She joined with percussionist Pedrito Martinez and singer Sofia Rei for a wonderful rendition of “Little Drummer Boy.”

Kat Edmonson sang a wistful version of Frank Loesser’s “What are you Doing New Year’s Eve.” The terrific violinist Regina Carter performed an up-tempo rendition of “Carol of the Bells,” which segued into “Doin’ the Uptown Lowdown,” in which she traded licks with Skonberg. Carter returned for Elllington’s “Just Squeeze Me (But Don’t Tease Me)” with some pizzicato work and even a quote from “I’m Gonna Wash That Man Right Out of my Hair” (which would seem to have an opposite message). The last Ellington piece was “Ring Them Bells.”

Frank Sinatra was recalled by Molly Ryan’s performance of the wistful “Christmas Dreaming” and Edmonson did “Mele Kalikimaka (Hawaiian Christmas Song),” popularized by Bing Crosby and the Andrews Sisters.

Vince Giordano and the Nighthawks Orchestra and guest artists delivered the goods.

In case you’re wondering what holiday music I have been listening to at home, there are two albums I especially enjoyed: Dan Chadburn’s “Whispers The Falling Snow” and “Of Kings & Angels” by Medieaeval Babes. Chadburn’s CD is a solo piano recital, combining traditional carols and his own compositions. It is flowing and peaceful, reminiscent of Keith Jarrett in a mellow mood. Even a Scrooge like me found it appealing. The other album is comprised of six women plus other female guest singers, produced and musically directed by Katherine Blake. The liner notes contain color photos of the singers; they are all pretty. So is their singing on some of the most familiar songs, such as “Silent Night” and “God Rest Ye Merry Gentlemen.” They make it all sound fresh and magical. The lyrics are included, which is helpful for the more obscure material. I generally try to avoid seasonal fare but these albums found an original approach to Christmas music.