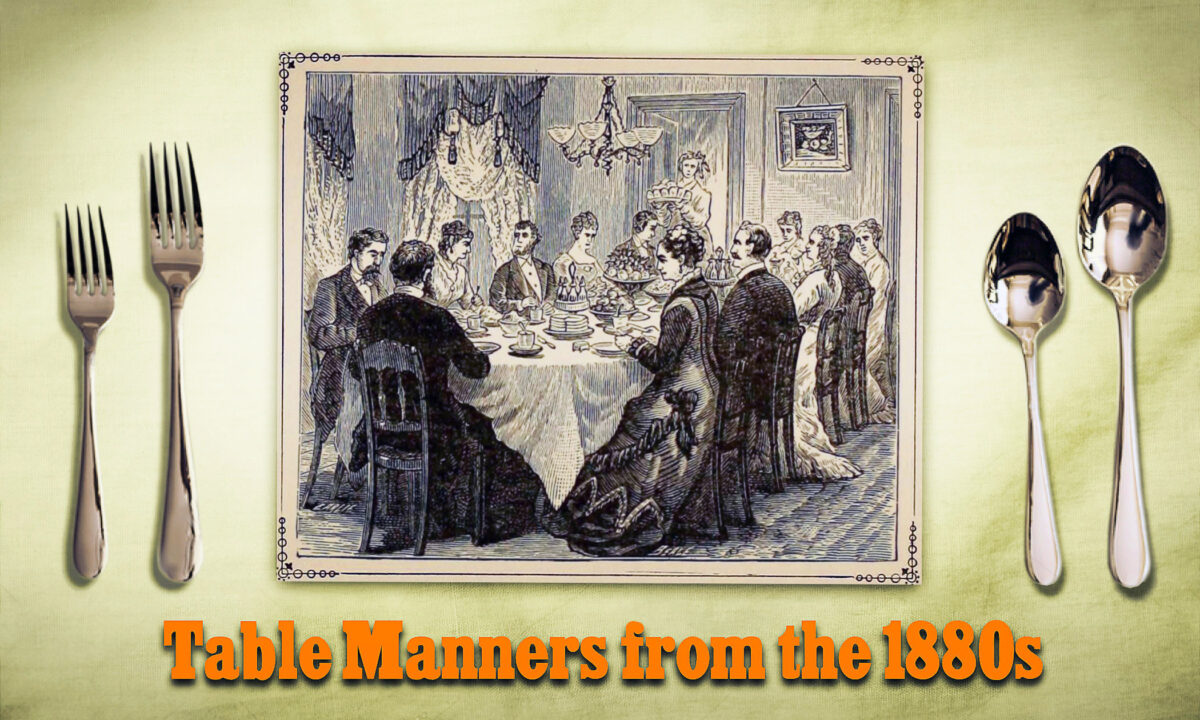 Got Table Manners? Here Is the ‘Proper’ Dinner Party Conduct From an 1800s Manual on Etiquette

The following is an excerpt from “Our Deportment,” a code of manners for refined society by John H. Young A.M., published in 1881. We offer it in hopes of promoting gentlemanly conduct among men—young and older—in today’s often unbalanced world.

IT is of the highest importance that all persons should conduct themselves with the strictest regard to good breeding, even in the privacy of their own homes, when at table, a neglect of such observances will render one stiff and awkward in society. There are so many little points to be observed, that unless a person is habitually accustomed to observe them, he unconsciously commits some error, or will appear awkward and constrained upon occasions when it is important to be fully at ease. To be thoroughly at ease at such times is only acquired by the habitual practice of good manners at the table, and is the result of proper home training. It is the duty of parents to accustom their children, by example as well as by precept, to be attentive and polite to each other at every meal, as well as to observe proper rules of etiquette, and if they do so, they need never fear that they will be rude or awkward when they go abroad. Even when persons habitually eat alone, they should pay due regard to the rules of etiquette, for by so doing they form habits of ease and gracefulness which are requisite in refined circles; otherwise they speedily acquire rude and awkward habits which they cannot shake off without great difficulty, and which are at times embarrassing to themselves and their friends. In private families it should be observed as a rule to meet together at all meals of the day around one common table, where the same rules of etiquette should be rigidly enforced, as though each member of the family were sitting at a stranger’s table. It is only by this constant practice of the rules of good behaviour at home, that good manners become easy when any of them go abroad.

At the first meal of the day, even in the most orderly households, an amount of freedom is allowed, which would be unjustifiable at any other meal. The head of the house may look over his morning paper, and the various other members may glance over correspondence or such books or studies as they are interested in. Each may rise and leave the table when business or pleasure dictates, without awaiting for the others or for a general signal.

The breakfast table should be simply decorated, yet it may be made very attractive with its snowy cloth and napkins, its array of glass, and its ornamentation of fruits and flowers. Bread should be placed upon the table, cut in slices. In eating, it must always be broken, never cut, and certainly not bitten. Fruit should be served in abundance at breakfast whenever practicable. There is an old adage which declares that “fruit is gold in the morning, silver at noon, and lead at night.”

In many of our large cities, where business prevents the head of the family from returning to dinner until a late hour, luncheon is served about midday and serves as an early dinner for children and servants. There is much less formality in the serving of lunch than of dinner. It is all placed upon the table at once, whether it consists of one or more courses. Where only one or two are at luncheon, the repast is ordinarily served on a tray.

The private family dinner should be the social hour of the day. Then parents and children should meet together, and the meal should be of such length as to admit of the greatest sociality. It is an old saying that chatted food is half digested. The utmost good feeling should prevail among all. Business and domestic cares and troubles should be, for the time, forgotten, and the pleasures of home most heartily enjoyed. In another chapter we have spoken at length upon fashionable dinner parties.

THE KNIFE AND FORK.

The knife and fork were not made for playthings, and should not be used as such when people are waiting at the table for the food to be served. Do not hold them erect in your hands at each side of your plate, nor cross them on your plate when you have finished, nor make a noise with them. The knife should only be used for cutting meats and hard substances, while the fork, held in the left hand, is used in carrying food into the mouth. A knife must never, on any account, be put into the mouth. When you send your plate to be refilled, do not send your knife and fork, but put them upon a piece of bread, or hold them in your hand.

To put large pieces of food into your mouth appears greedy, and if you are addressed when your mouth is so filled, you are obliged to pause, before answering, until the vast mouthful is masticated, or run the risk of choking, by swallowing it too hastily. To eat very fast is also a mark of greediness, and should be avoided. The same may be said of soaking up gravy with bread, scraping up sauce with a spoon, scraping your plate and gormandizing upon one or two articles of food only.

Refrain from making a noise when eating, or supping from a spoon, and from smacking the lips or breathing heavily while masticating food, as they are marks of ill-breeding. The lips should be kept closed in eating as much as possible.

It is rude and awkward to elevate your elbows and move your arms at the table, so as to incommode those on either side of you.

Whenever one or both hands are unoccupied, they should be kept below the table, and not pushed upon the table and into prominence.

Do not leave the table before the rest of the family or guests, without asking the head, or host, to excuse you, except at a hotel or boarding house.

Tea or coffee should never be poured into a saucer to cool, but sipped from the cup.

If a person wishes to be served with more tea or coffee, he should place his spoon in his saucer. If he has had sufficient, let it remain in the cup.

If by chance anything unpleasant is found in the food, such as a hair in the bread or a fly in the coffee, remove it without remark. Even though your own appetite be spoiled, it is well not to prejudice others.

Always make use of the butter-knife, sugar-spoon and salt-spoon, instead of using your knife, spoon or fingers.

Never, if possible, cough or sneeze at the table.

At home fold your napkin when you are done with it and place it in your ring. If you are visiting, leave your napkin unfolded beside your plate.

Eat neither too fast nor too slow.

Never lean back in your chair, nor sit too near or too far from the table.

Keep your elbows at your side, so that you may not inconvenience your neighbors.

Do not find fault with the food.

The old-fashioned habit of abstaining from taking the last piece upon the plate is no longer observed. It is to be supposed that the vacancy can be supplied, if necessary.

If a plate is handed you at the table, keep it yourself instead of passing it to a neighbor. If a dish is passed to you, serve yourself first, and then pass it on.

The host or hostess should not insist upon guests partaking of particular dishes; nor ask persons more than once, nor put anything on their plates which they have declined. It is ill-bred to urge a person to eat of anything after he has declined.

When sweet corn is served on the ear, the grain should be pared from it upon the plate, instead of being eaten from the cob.

Strive to keep the cloth as clean as possible, and use the edge of the plate or a side dish for potato skins and other refuse.