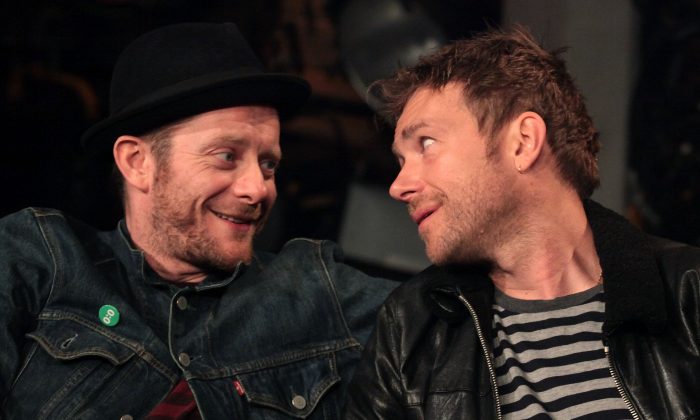 Gorillaz On the Making of Hit Album ‘Plastic Beach’

By James Poulter
Print
In a change from their usual transmission, the UK's BBC Radio 1 dedicated a two hour slot early evening on Tuesday May 4th to Gorillaz, now one of the biggest acts in the world after international sales exceeding 15 million records.

Damon Albarn and Jamie Hewlett spoke eloquently about the creative process behind recent hit album Plastic Beach in their first radio interview since its release. This was followed by 60 minutes of highlights from last week's London Roundhouse gigs.

Plastic Beach is a genuine collaborative effort, and some of the most intriguing parts of the interview involved anecdotes of these collaborations. Perhaps the best image is of Albarn rushing into the lobby of a “very hip-hop” studio demanding a banana to resuscitate the slumped soul legend Bobby Womack.

Over the past decade Albarn has been riding a tidal wave of creativity, from Mali Music to Chinese opera Monkey: Journey To The West, from super-group The Good, the Bad and the Queen to the ecstatically received Blur reunion. So to see him so effectively take “virtual band” Gorillaz to the stage should come as no surprise.

Mick Jones and Paul Simonon of The Clash, De La Soul, Super Furry Animals frontman Gruff Rhys, Shaun Rider and Bobby Womak were just some of the performers on show.

Assembling such a variety of stars on stage at one time is itself no mean feat, and top marks must go to flying in the Syrian National Orchestra from Damascus to perform with London MCs Kano and Bashy (humorously referred to as Volkano and Ashy after certain flight problems).

Indeed, when discussing the album Plastic Beach, it transpires that the main problem was really trying to focus the huge abundance of collaborative material they produced – tracks such as 'Leviathon', recorded with The Horrors simply didn’t make the album.

So from whence does this vast abundance of creativity stem? From listening to this candid and warm interview one could surmise that being broadminded and open to the opportunities around them has been the main key to success. This plus Albarn’s penchant for authenticity.