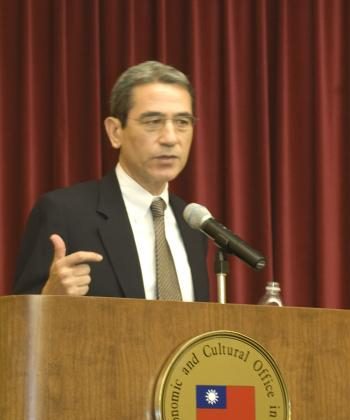 Author Gordon Chang recently spoke at the Taipei Cultural Center in New York about the effects of the 2008 Olympics on China. (The Epoch Times)
Arts & Culture

Focus on the Writer…Gordon Chang

Author foresees a new China after the Olympics

NEW YORK—Gordon Chang has written several books on China. The writer recently spoke at the Taipei Cultural Center in New York where he discussed what will happen in China after the Beijing Olympics.

Chang said Chinese officials have adopted a fairly low profile around the Olympics. He said that there is also a hint of caution which indicates that, even at this date, senior officials do not know how the games will turn out. These officials also know that it will cause serious problems if they do not turn out well.

In the last two months Chang and his wife visited four cities in China to gauge the reactions of the Chinese people. The lack of optimism and enthusiasm surprised him. He also noted a great lack of interest in more remote areas of the country.

“I think that the Chinese people are worn out by the Olympics and Chinese propaganda. I'd call it 'Olympic fatigue'.” Of course, the games have been jazzed up some, but he did not run into them until he visited Hong Kong. There he learned of one of China’s special administrators who is genuinely proud that China is hosting the events.

From one end of China to the other, Chang  noted continuing unrest. Just before he left Beijing, the death of a girl in Guizhou Province started a riot. Thirty thousand angry citizens burned cars and the police headquarters. Similar disturbances  were sparked by events in Guangdong and Yunan.

Chang said he did not think these events were meant to embarrass their government before the Olympics. It might be that the games are taking place in turbulent times where change is happening at an unheard of speed. This is in large part to regime-sponsored economic reform and social engineering by the CCP.

But the games have taken their toll. Some time this spring, the Chinese leadership abandoned the goal of hosting the best Olympic Games ever. “I think,” Chang said, “that Beijing’s objective right now is to get through 17 days of ceremonies and contests incident-free.”

It was clear that the Chinese government had great ambitions. According to its official media sources, China expected 125 million visitors to Beijing this year. This is reflected in the size of the airport's new Terminal 3. Nearly 100 new hotels have gone up in Beijing in addition to existing five-star establishments, inns, and hospitals. But he said these newly-built establishments are empty.

Chang said that Chinese officials were taken aback by the protests along the route of the Olympic torch. It is also clear that they did not expect the Tibet uprising in March. The regime responded by denying visas to businessmen, backpackers, and middle-aged tourists who held tickets to the Olympics. The government began to reject long-term foreign investments and canceled long-planned conferences and other events that involved foreign participants. This clearly shows that security concerns still trump economic ones.

So, what will happen when the games end and tourists leave? If the Beijing Olympics are a turning point, what is China turning toward? At one end of the spectrum is a modern, glorious chapter in its history; on the other, a time of great uncertainty.

The latest bombings by the Turkistan Islamic Party will not soon be forgotten in Beijing. Even if this group does not launch an attack on the Olympics—which they promised to do in a statement issued two weeks ago—the Central government said that it doubts the claims of responsibility. The Turkistan Islamic Party has actually declared war on Chinese Central Government and radical leaders are not going to give up their struggle just because some sporting event has concluded.

Chang expects security forces will remain on highest alert because of internal power struggles. The factions within the central government will continue to fight for the power, prestige and money that is at stake.

Oppression, after all, has its own internal logic. The most successful regimes have maintained a constant level of oppression. Changing the level of oppression can be very dangerous. That is especially true when a government reduces its control. People then feel they have the right to express their frustrations. Oppression often fails during times of economic downturns. In fact, many people in China expect the economy to sour.

Of course, Chang said, the Central Government’s economic measures have been very impressive but that does not mean that they will be able to handle the difficult challenges that will occur in the future.

Because of an anticipated recession, the regime will experience especially difficult times after the games. 2007 was the fifth year of double digit growth. A mild recession hit in the late 1990's and there was a sharp contraction after the Tiananmen uprising in 1989. Although protesters demanded democracy and human rights, economic problems actually fueled the discontent. The biggest economic problem in 1989 was inflation.

By its own admission Beijing will have spent $42 billion on the games. This doesn't include efforts to clean up its notoriously dirty air—vehicle restrictions and the short-term halt to construction and industry.

Put together, it could be said that China will host the first $100 billion Olympics. When all construction stops and tourists go home, the Chinese economy will probably take a dip. Recently, the Politburo decided to focus on declining growth as China’s number one problem, even though inflation remains a very serious concern.

Chang's final assessment reflects whispers of economic downturn and social change. “I believe that the Olympics will change the Chinese people and the Chinese people will change the Chinese state. For sure we are going to see a new China after the Olympics. The country is very turbulent and the Summer Games will do nothing but accelerate a change in the economy and accelerate the change in society. China will soon go through a very turbulent and very critical period.”

Gordon Chang's recent book is “The Coming Collapse of China.” His web site is Gordonchang.com