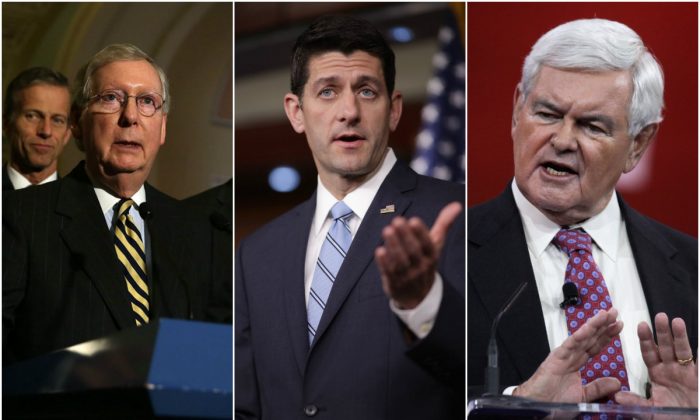 One by one, the GOP leadership has condemned Donald Trump’s remarks claiming that the judge in the Trump University case is biased because of his Mexican heritage—although the judge was born in Indiana.

Speaker Paul Ryan, who had just endorsed Trump in a lengthy op-ed from his hometown in Wisconsin, said Trump’s comments “came out of left field.”

“Look, the comment about the judge the other day just was out of left field for my mind,” Ryan said, after Trump argued that U.S. District Judge Gonzalo Curiel’s Mexican heritage creates “an inherent conflict of interest.”

“It’s reasoning I don’t relate to,” Ryan said. “I completely disagree with the thinking behind that. And so, he clearly says and does things I don’t agree with, and I’ve had to speak up from time to time when that has occurred, and I’ll continue to do that if it’s necessary. I hope it’s not.”

This is not the first time Ryan has disagreed with Trump on an issue. Last year, Ryan made a similar moral distinction between Trump and himself after Trump announced his proposed ban on Muslims entering the United States.

Another unlikely Trump critic is former speaker and rumored Trump VP pick Newt Gingrich, who didn’t mince words when it came to his distaste.

“This is one of the worst mistakes Trump has made, and I think it’s inexcusable,” said Gingrich on Fox News. “If a liberal were to attack Justice Clarence Thomas on the grounds that he’s black, we would all go crazy.”

Trump responded, in a subsequent interview on “Fox and Friends,” that Gingrich’s criticisms were “inappropriate.”

“I was surprised at Newt. I thought it was inappropriate what he said,” Trump said.

Senate Majority Leader Mitch McConnell was also critical of the remarks, although he had previously come out in support of Trump.

“I couldn’t disagree more with a statement like that,” McConnell said on NBC’s “Meet the Press,” though he repeatedly refused to say whether the comments were racist.

“America is changing. When Ronald Reagan was elected, 84 percent of the electorate was white. This November, 70 percent will be,”McConnell. said. “It’s a big mistake for our party to write off Latino Americans. And they’re an important part of the country and soon to be the largest minority group in the country. I hope he’ll change his direction on that.”

Trump has adamantly defended his claim, and added that a judge of Muslim faith would possibly also be biased against him.

“If it were a Muslim judge, would you also feel like they wouldn’t be able to treat you fairly because of that policy of yours?” host John Dickerson asked on CBS’s “Face the Nation.”