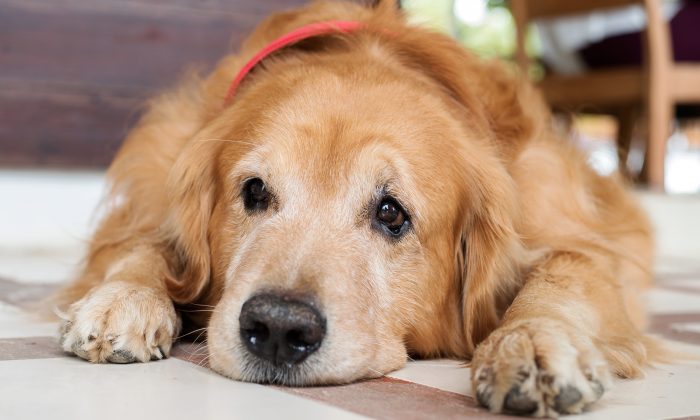 A golden retriever is shown in a stock photo. (Illustration - Shutterstock)
Animals

Kai the golden retriever weighed 173 pounds when his foster owner Pam Heggie took him into her home in Edmonton, Canada, determined to save him from being put down by his previous owners.

Over a year on, Kai has lost 100 pounds and is happier than ever with his foster mother.

The severely overweight golden retriever was left at a veterinarian in Onoway, Canada, in March 2018 to be put down.

However, he found his way to Heggie after a member of staff contacted Misfits of Alberta Animal Rescue to help him find a new home so he could get a second chance at life.

Speaking with Good Morning America (GMA), Heggie said when she first welcomed Kai into her home, he was as large as a table.

“This is the most overweight animal I have ever seen,” her veterinarian told her, reported GMA.

Although she knew it was going to be a challenge to get the dog back into shape, she was determined to give Kai a happier life, and was spurred on by her vet’s reassurance.

According to Heggie, Kai initially struggled to even to climb the stairs in her home, and it took him more than 20 minutes to reach the top.

“Literally, he went 5 to 10 steps, and then he would lay down and start panting,” Heggie explained.

Determined to help Kai, Heggie soon began to take him on walks three times a day, no matter what the weather was like. They went short distances each time to make sure Kai wasn’t overwhelmed.

“We went to the closest neighbor’s driveway and then the next neighbor over,” she continued. “Snow, rain, sleet, boiling—we went out every single day.”

On top of Kai’s fixed walking sessions, Heggie also pushed him by bringing him to water therapy sessions to strengthen his legs, while making sure he stuck to a diet.

“He learned that I was gonna help him and we were gonna be OK,” Heggie said.

Heggie added that seeing how much Kai has progressed makes her emotional, and described his journey as similar to seeing a child of her own grow up.

“It’s crazy. It’s like raising your child and you look at them and they’re all grown up and you just wonder how that happened,” she said.

“I look at him and forget how broken he was. Now he’s just a regular dog doing regular dog things like everybody else.”

“He truly amazes me every day,” she added.

Heggie told GMA she is extremely proud of Kai, who has maintained a healthy weight of 70 pounds.

“Everybody has things they need to do—and he was just so happy … every day he was like, ‘This is what we have to do and I’m going to do it.’ And every day he did it,” she said.