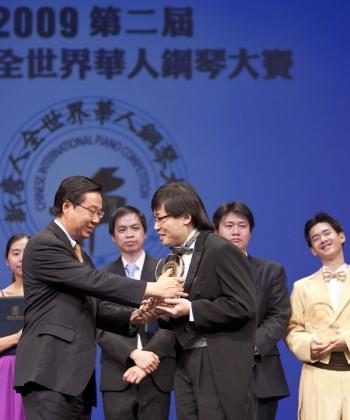 NEW YORK—To “meld with the music, to play to serve the music; not for the glory, and not for the judges.” That is the philosophy of this year's gold winner for the Chinese International Piano Competition, Xiaofeng Wu.

Wu, a Shanghai native, moved to Manhattan only two months ago. While he's not a newcomer to the world of piano and piano competitions, he sees this gold award as a milestone—one that gave him a confidence boost, he said.

For the final round of the competition, Wu played Ferruccio Busoni's Chaconne, originally written by Johann Sebastian Bach for the violin, and Beethoven's piano sonata No. 23 in F minor, Op. 57.

Wu says when he plays, he's bathed in “joy, a holy feeling.” At the peak of one piece, he visibly teared up. “I almost cried, but I controlled myself,” he said. Musicians often say that if you are to move your audiences, you must first be moved yourself. Clearly the judges picked up on his complete immersion in the music.

“These pieces require both high technical skill and focus,” said judge Becky Yao. “These contestants have the makings of masters and exhibit great control.”

What besides good foundations are the judges looking for? In Mozart pieces (required for the preliminary round), they listen for a childlike innocence, according to judge Sheung-Tz Ma. For Beethoven, they expect good control and the layering of sound; for Bach, majesty.

“Everyone puts the music at the forefront here,” Wu said of the contestants and judges at this particular competition. “It was not about jousting for position, so that gave way to a lot of sharing and warmth.”

Indeed, the competition, held by New Tang Dynasty TV, is part of a nine-competition series that serves as a platform for Chinese people all over the world to engage in the arts. At the core of the television station's mission is the revival of traditional culture, both Chinese and Western.