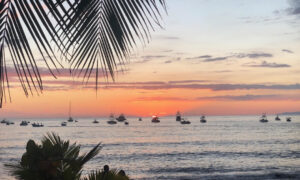 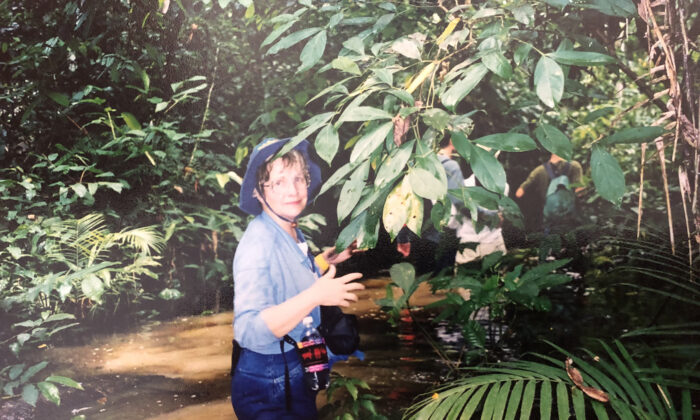 Going for a Jungle Swim

On the second night we were at the Tambopata Jungle Resort in Peru, our guide, Juan, took us for a boat ride to spot caimans. He used his big flashlight to spot the beady eyes watching us from just above the water level. Suddenly he reached over and pulled a four-foot young caiman into the boat with us. He laughed at his success, tossed the animal back into the water, and turned the boat toward the dock.

Morning dawned with beautiful weather for our hike to a lovely swimming lake. The lodge provided knee-high galoshes and a raincoat. Juan assured us the hike was short and he had everything we’d need. We set off down the mud steps and into the boat that had had an unreliable motor the previous day.

We made it across the very wide river in about a half-hour, arriving at the University Research Station for Jungle Research. We expected a modern building but instead walked up the small trail to find a few grass huts. Just behind these was the dense jungle with a three-foot-wide trail cleared for people to pass through along the same pathway animals use to the lake.

As we walked, Juan told us about the flora and fauna we were encountering. He described the plants along the way and told what they are used for, in medicines and for eating, and he also pointed out many lethal ones and warned us not to touch. His main fascination was birds, and many beautiful species live here or migrate here during Northern winters.

The enormous kapok trees formed a canopy so high above us that we could not see their tops. We knew this jungle was filled with such exotic animals as tapirs, anteaters, sloths, jaguars, ocelots, and capybaras. As Juan pointed out a tapir footprint on the trail, he explained, “The jungle mammals only come out at night, but there are lots of snakes and insects I’ll tell you about.”

“We have seven kinds of poisonous serpents and anacondas that can be more than 30 feet long. You must watch out for these because they are active all the time.”

Just then, we came to a puddle so large we could not step over it, and the thick jungle prevented our going around it. I stepped into water up to my thighs, but there was nothing to do but go on through, both boots filling with water.

We walked on now with Juan walking backward and talking to us about the birds that make the lake where we were headed their home. We mostly watched the trail for snakes and puddles. Then suddenly he stepped into water he hadn’t seen and disappeared below the surface. We stood in horror as he groped his way out laughing.

“This isn’t the lake where we are going swimming,” he said. “We are almost at the beautiful lake, where we will have a picnic and then return.”

He jumped into the water and began to swim across, and we forged ahead, too. The water was over my head in places where I had to swim. Bill held our cameras high above his head as he carefully stepped along in water up to his chin. After what seemed like hours but was perhaps 25 minutes, we stepped out on the other side and followed our happy guide onward to the swimming lake, but we had had enough of an Amazon jungle swim to last a lifetime. Our three-hour hike had now lasted four hours, and we had not yet arrived at our destination. And we still had the return trek to endure.

I was first in line behind Juan, trudging along through the deep woodsy jungle as our trail had ended with the watery lagoon. Suddenly I heard: “Be careful, go around that tree. There is a colony web of hundreds of poisonous spiders right at your face!”

And there was more. We came to a place where the water again was over our heads. According to Juan, all of this water had resulted overnight from rains upstream, but they had no radio, phone, or newspaper to find out about it. Ahead was the formerly small stream turned into a raging, muddy river.

Thankfully, a huge tree had fallen across it and made a bridge for us, and Juan found a long vine to hold on to. Just below our feet was the swirling raging death that one misstep would take us straight into. The gangplank seemed endless, but we made it across safely. A few minutes more and we were at our destination.

We were hungry and asked Juan to get out our picnic. From his bag he pulled one tiny can of tuna and some soggy saltines. We tried to eat a little tuna with our fingers but refused the saltines since there was nothing to drink. Then he reached into his pack again and pulled out a raw chicken leg, pieces of which he fed to the fish.

“Watch closely,” he said, and the water suddenly boiled with piranhas.

Back on shore, the trail through the thick jungle appeared again, and we followed it until finally the grass huts of the research station appeared. I ran inside to get something to eat and drink. All they had was bananas and beer, which we devoured rapidly. It sounds awful, but nothing ever tasted so good.