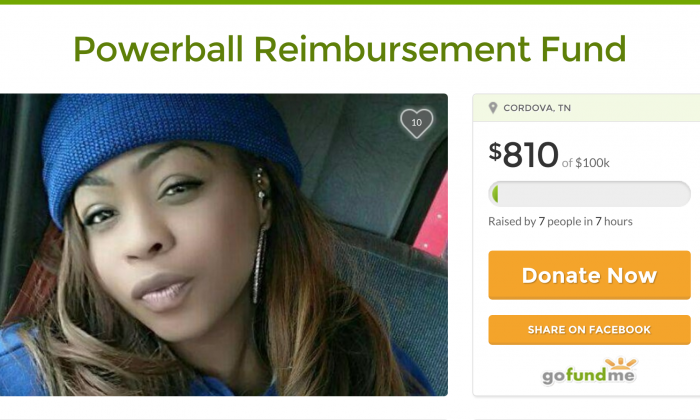 Screenshot of the now-deleted GoFundMe Page for Cinnamon Nicole, who'd spent all of her savings on Powerball tickets.
Life & Tradition

A GoFundMe page was set up on Wednesday for a woman named “Cinnamon Nicole,” who claims to be in desperate need of money after having spent all of her family’s savings on Powerball tickets.

“Please help me and my family as we have exhausted all of our funds,” the crowdfunding plea reads. “We spent all of our money on lottery tickets (expecting to win the 1.5 billion) and are now in dire need of cash…PLEASE, won’t you help a family in need. DONATE NOW.” It adds: “With your small donation of at least $1.00, a like and one share, I’m certain that we will be able to pick ourselves up from the trenches of this lost and spend another fortune trying to hit it big again!”

Many commenters suggested that the page was a scam or a practical joke, and GoFundMe has now deleted the page from its website.

There’s no proof that Nicole actually bought the tickets, or if she’s a real person for that matter.

“The campaign in question was removed for a violation of GoFundMe’s Terms & Conditions,” GoFundMe Media Director Kelsea Little told PIX11 in a statement.

“Pretty sure she’s being sarcastic.” one commenter wrote. “Please lighten up people,” added another commenter.

The cached version of the GoFundMe page shows that people had donated $810 before it was shut down.

A couple in Tennessee has claimed the winning Powerball ticket.

According to CNET, GoFundMe said the donations were refunded.