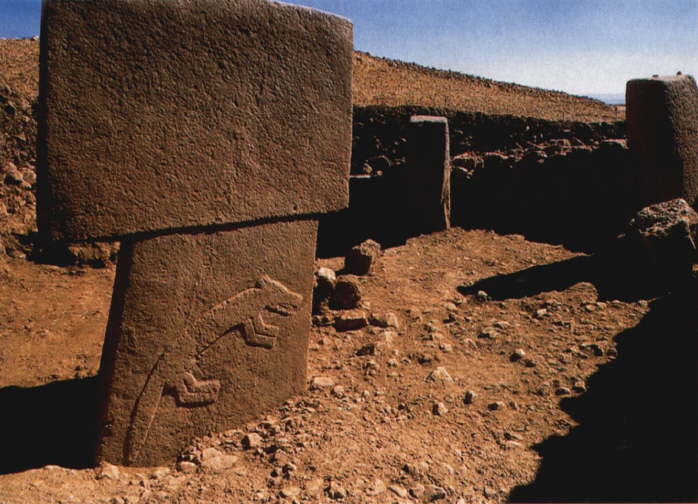 Göbekli Tepe: the Rise of Agriculture, the Fall of the Nomad

The human was born a traveling animal. For over 100,000 years we walked across the great Savannas, made way through the jungles, camped in Arctic tundra, and hunted and foraged in the forests of this planet. Then, a little over 10,000 years ago — a blip in our species’ timeline — we started laying down our satchels, building our shelters with a sense of permanence, and began cultivating the grains and animals in our surroundings. This great event, perhaps the largest shift in human cultural evolution, happened around a great temple now called Göbekli Tepe in southeastern Turkey.

In Search of Humanity’s Lost Nomadic Past

It may seem ironic for a trave ler to be drawn to the site of humanity’s first incidences of sedentarization, but I saw in this story something leading to the roots of my own restlessness, my own undeniable wanderlust.

I have been interested in the deeply ingrained nomadic urges that still seem to lay dormant inside the building blocks of the human genome since my early days of travel. What made me want to travel? What was this urge that made me grow restless in a place after a couple of months? Why did I want to follow the geese and run with the seasons? What was the anatomy of this incessant drive to migrate over the earth? After nearly twelve years of traveling I am still not any closer to answering these questions, but I feel that the transitioning point from when humans were primarily migratory hunter-gatherers to when they became sedentary farmers is a big lead towards unraveling this riddle of the ages.

I went in search of my species’ lost nomadic roots to the very area of the world where they were first laid to rest: the Fertile Crescent. There was an intermediary span of geography that stretched from the Mediterranean Sea almost all the way to the Persian Gulf, from the highlands of Anatolia to the Syrian desert that was once so flush with wildlife, various ecosystems, and rich soils that it became the cradle of human civilization — the place where wanderers became city builders. It was here that Homo sapiens first developed the cultural and technological mechanisms that allowed them to build great temples and later to farm, become sedentary village dwellers, and, eventually, to construct great cities.

It was in this region that the conflict between Cain and Abel arose. The story goes that Cain the farmer became jealous that his nomadic brother, Abel the shepherd, was receiving preferential treatment from God, so he killed him off. This is often seen as a periscope of an older Sumarian story which represents the rise of sedentarization over nomadism. Certainly, this shift in human living strategies — the claiming of permanent land rights over migration — did not come without conflict. So I went to the land where Abel once roamed and Cain once toiled in the earth to try to piece together the story of human restlessness for myself.

To the World’s First Temple

“First came the temple, then the city,” spoke Dr. Klaus Schimidt, the German archaeologist who leads the research at Göbekli Tepe, the world’s earliest known temple. My search for humanity’s hunter-gather past found me riding in a little grey car to the base of the hill upon which this great archaeology site sits, 15km outside of Sanliurfa, Turkey.

Göbekli Tepe is truly one of the most groundbreaking archaeology sites currently being investigated on the planet, and the findings that have been uncovered over the past 17 years are literally rewriting the book on how civilization first arose, as well as providing a window through which the initial sedentarization phases of humanity can be viewed.

“It is the idea that the sanctuary may be earlier than the settlements, or at least at the same time,” Schmidt continued as we turned onto a highway outside of Sanliurfa, “but we don’t have the cities, the cities are developing much later than the temple. In the Near Eastern archaeology often you can read about how the cities had first developed and then within the cities the first temples [were made], but that is not true: the temple and the city are very separate. The temples are very, very early, they started in the Paleolithic era with the painted caves, for example. Now at Göbekli Tepe we have the proof that these man made structures were used for rituals and used for religion. So the temple is much earlier than the city.”

“So the temple was the adhesive, the focus point, which brought people together?” I asked Professor Schmidt.

“Yes, focus point,” he replied, “A platform for the people to meet and to communicate and to share knowledge and stories and to talk. They were very important social places.”

Klaus continued to provide a picture of how Paleolithic hunter-gatherers would converge upon Göbekli Tepe for festivities as we turned off the highway and made way along a narrow dirt and gravel road towards a protruding hill in the distance. Klaus soon halted the forward progress of the vehicle so that I could fully take in the scene before me. “You can recognize the limestone plateau, and on top of the limestone plateau there is this mound of earth, a hill. Everything is artificial, it is not nature. It is a settlement mound.”

It was Göbekli Tepe.

I looked out at the place whose name means “Pot-belly Hill,” and the little dirt road that snaked up its side. It looked like a giant buxom flopped out upon the Anatolian plain. Just as the effect took, Klaus revved up the engine once again and we slowly crawled up to the apex of the giant boob. My excitement level rose: I was there,at ground zero for human sedentarizaion, at the place where nomadic hunter-gatherers grew to become civilized farmers.

Göbekli Tepe is the temporal door that crosses the divide between the free roaming days of Abel and the agricultural toil of Cain. This was the stage upon which the wandering hunting and gathering act of humanity first began its great close. The times surrounding Göbekli Tepe are still vaguely remembered in the collective folklore of humanity’s deep past. In ancient Sumarian tradition there are stories about a mythical mountain dwelling in the north called Du-Ku, where grain was first sowed, animals domesticated, and weaving was invented: the rise of farming and the fall of human migration. There is a good chance that the colossal events which surrounded this place were passed down through the ages to be remembered as folklore, with each subsequent culture manipulating the stories to fit their own paradigm of history. I grasped each story as handholds and climbed back through time to the beginning of civilization, to the place where it may have all began: Göbekli Tepe.

I asked Klaus about the rumors that the site he is excavating very well could be the actual place the Garden of Eden story was rooted. He huffed quickly, and replied that he was misquoted by an unscrupulous journalist. “It is a picture [Göbekli Tepe being the Garden of Eden], it was used as a picture and later there was a misuse of this picture. The climatic conditions here were like paradise for hunters and gatherers. They were living in a situation like paradise, but there is no connection to the Garden of Eden. Adam and Eve had been thrown out of this garden, but it is not describing a natural condition. There is no connection between Eden in the Old Testament and Göbekli Tepe.”

The first incarnati on of Göbekli Tepe broke ground roughly 12,000 years ago, and for the next three thousand years people used it for great ceremonies and feasts. “It is a little bit surprising because we expected for this period that the people had been living in very simple social conditions, but now it is looking very different,” Schmidt explained how a high level of social organization must have been needed to build such a massive site. Schmidt estimates that it must have taken work teams of hundreds of people to construct Göbekli Tepe throughout each of its various stages, and the organization needed to feed, house, and assign tasks to this large of a work crew hints that early Neolithic society was vastly more complex than archaeologists previously assumed.

As I walked around the site I could hear the crunching sound of flaked flint coming from beneath my feet. On the ground were thousands of pieces of flint discarded thousands of years ago in the manufacture of stone tools, along with some of the tools themselves. Trained as an archaeologist, I began instinctively focusing my eyes on the array of artifacts that were passing beneath my feet, identifying blades, choppers, utilized flakes, among other primitive stone implements.

“Millions, millions,” Klaus spoke when I mentioned the profusion of artifacts that laid all over the mound. “Of all the archaeologists visiting this site everyone says ‘I never saw such a mound of flint.'” In the USA, finding such a cache of artifacts alone could have made an archaeologist’s career, but here at Göbekli Tepe there was bigger competition for the researcher’s attention, and the little stone tools that momentarily held my intrigue all of a sudden fell towards insignificance when I saw the site’s main attractions.

Down in a ten foot excavation pit, giant T-shaped monoliths arranged in circle formations broke through the ages and into the present. Twelve great T-shaped monoliths stood in a circle around two even larger T-shaped monoliths. Each giant pillar was carved from a single piece of stone, stood up to ten feet high, and weighed between seven and ten tons (2). The excavation teams have now uncovered four such rings of megaliths, spanning between 30 and 100 feet in diameter. Geomagetic surveys show that there are at least 16 other such rings still buried beneath Göbekli Tepe, which itself is around 1,000 feet from end to end and rises over 50 from the plateau. Around these rings were once walls, and there may have even been some ceilings. These rings of stone giants obviously mark the site of major events in prehistory.

What was most striking about these giant monoliths is that they are intricately carved with predatory animals and birds — lions, foxes, vultures, ducks, and mystical beasts. What is even more interesting is that in addition to the animals reliefs which don the pillars, the very pillars themselves have human forms. “You see in the front,” Klaus pointed towards a particularly tall pillar, “there are fingers. So we know that this T-shape is an anthropomorphic shape. They are all anthropomorphic beings made of stone. It is strange that there are no eyes, no nose, no mouth.”

Copyright © 2015 by Vagabond Journey Travel. This article was written by Wade Shepard and originally published on www.vagabondjourney.com.