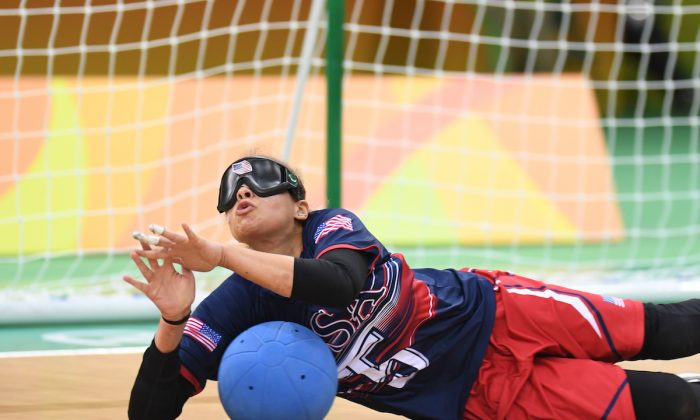 Amanda Dennis defends against a shot during the bronze medal match at the 2016 Rio de Janeiro Paralympic games. (Loren Worthington)
Slice of Life

Goalball: A Paralympic Sport for the Blind and Visually Impaired

Paralympians are some of the world’s most competitive athletes, and there are many popular events, including skiing and basketball. However, one Paralympic sport has gone largely unnoticed despite the intensity and difficulty of the game.

Goalball is a Paralympic sport designed for the blind and visually impaired. Originally, the sport was developed to help in the physical rehabilitation of World War II veterans who had lost their sight.

The sport was initially introduced into the Paralympic games in 1976, and the women’s team competed for the first time in the 1984 games.

Teams of six compete against one another with three players from each team on the court at the same time. Players remain blind-folded, on their hands and knees, and the object of the game is to throw the ball into the opposing team’s goal. The ball is 2.8 pounds, and has bells inside to let players know where the ball is on the court.

The Epoch Times had the opportunity to speak with two Paralympic athletes from the men’s and women’s team to learn more about this intense, competitive sport.

Amanda Dennis is 25 years old, and is from Peachtree City, Georgia. Dennis was born with an eye condition called aniridia, which left her without irises. She first started playing goalball at age seven, and her parents would drive her to practice in Atlanta every weekend.

Dennis played in the youth national championship, and then started playing in adult tournaments. At age 15, she began playing internationally for the U.S. youth world team. After competing in those games, she was invited to an elite camp for the Paralympic team in 2010.

By 2012, Dennis was competing in the London Paralympics.

At the time, Dennis was still in high school. She would train five days a week, and worked on her cardiovascular and strength conditioning. Her experience in London was nothing short of memorable.

“I was inspired by the London 2012 games just because I had never really been to an event like that,” Dennis told The Epoch Times.

Dennis relies on her other senses like hearing and touch to determine where she is on the court, who’s around her, and where the ball is. Communication with teammates is also critical.

Dennis had to also psychologically prepare herself for the games as well. Furthermore, she had to be able to trust and rely on her teammates.

“Having the confidence to hit that shot is one of the hardest things about it,” Dennis explained.

Unfortunately, Dennis and her team left the 2012 London games without a medal. However, the experience motivated her to get the U.S. team back on top for the 2016 Rio de Janeiro games.

The team’s diligent work paid off when they beat the Brazilian team to win a bronze medal in 2016.

“Once we were on the podium, it was one of the most amazing experiences ever,” Dennis recalled.

Despite the level of play, goalball is not as recognized as other sports in the Paralympic community particularly because it doesn’t have an Olympic counterpart. However, once one watches a game they can recognize the speed, agility, and talent required to play.

Dennis is currently preparing for the 2020 Tokyo games, and her team is training five days a week and working on conditioning.

“Our ultimate goal is to get the gold medal, and be on top of the podium, and hear our national anthem,” Dennis said.

Tyler Merren is 34 years old, and resides in Coral Springs, Florida. Merren was born with a medical condition called retinitis pigmentosa, and his vision began to deteriorate from age 14.

Merren first started playing goalball when he was 15. He was at a sports education camp for the visually impaired, and was introduced to different sports such as wrestling, swimming, and goalball.

Two years later, he was competing for the U.S. team at the Pan American games in 2001. Merren competed in his first Paralympic games in Athens in 2004.

Merren is a personal trainer by trade, and is familiar with the physical aspects of the game.

“For me, I’m very well aware of the variations that the body needs. Flexibility, balance, strength, endurance, especially for a sport like goalball,” Merren said.

For the last several months, Merren has been doing a lot of heavy lifting and explosive plyometric training for the International Blind Sports Federation games in July. Psychologically, he has doubled down on his training and is ensuring that he is prepared.

The game takes a lot of energy, and there’s a nearly three-pound ball being hurled at him. He needs to know where he is, where his teammates are, and where the ball is. Furthermore, he only has about seven tenths of a second to find and react to the ball.

The foundation of Merren’s strategy depends on playing with 100 percent intensity for the entirety of the match. His key is to never hold back.

Merren has competed in the 2004 Athens, 2008 Beijing, and 2016 Rio de Janeiro Paralympic games, winning a bronze medal in Athens and a silver medal in Rio de Janeiro. Winning both medals was a huge accomplishment, but there’s an interesting win-loss dichotomy to the game.

“You win the bronze. You lose to get the silver,” Merren said.

Dennis and Merren both hope to win the gold medal in 2020 in Tokyo, Japan.