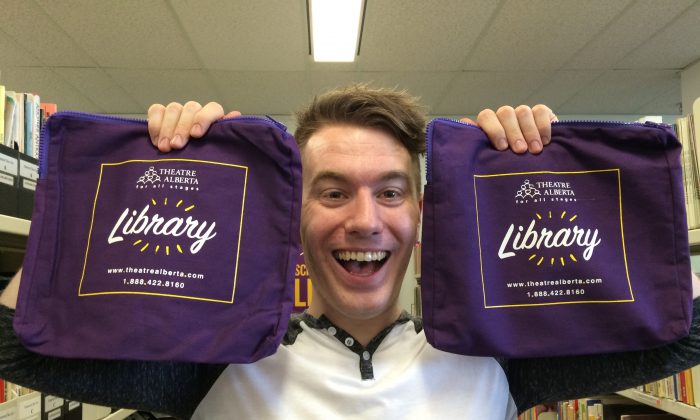 Silve Materi, summer library assistant at Alberta Theatre, shows off the special bags that will be used to mail plays to participants in the Purple Play Club. (Courtesy of Alberta Theatre)
Arts & Culture

Global Initiative Aims to Highlight the Importance of Libraries

More than 250 libraries and organizations from around the world, including several in Canada, are participating this week in a grassroots initiative to bring attention to the importance of libraries.

Titled Outside the Lines and designed by library marketers and directors based in Colorado, the initiative is “a weeklong celebration demonstrating the creativity and innovation happening in libraries,” according to the group’s website.

The idea behind the campaign, now in its third year, is to maintain interest in libraries by getting people to think about these “dynamic centres for engagement” in a different way and highlight how libraries remain relevant in the digital age.

To that end, participating libraries in 45 U.S. states as well as in countries including Canada, Puerto Rico, Croatia, England, and Denmark are hosting a variety of creative activities this week to highlight their libraries and engage the local community.

Thirteen libraries are taking part in Canada, including Theatre Alberta in Edmonton, whose library consists of more than 20,000 titles.

The non-profit theatre is hosting the Purple Play Club, which includes mailing three contemporary plays by Canadian playwrights to any interested individuals who will help spread the word about the theatre library and its resources.

“We’re up to 60 requests already. The response has already surpassed what we had last year, so we’re very pleased,” said communications and marketing coordinator Debbie MacLeod.

“We’re a specialized library for scripts and so we just want more people involved in theatre to know the huge selection that we have.”

In Florida, the Orange County Library System is using Outside the Lines to help the community heal in the wake of the Pulse nightclub shooting in Orlando in June, which resulted in the deaths of 49 people. OCLS is partnering with a local business which donated free art supplies to anyone who wanted to create a piece of art dedicated to the victims. More than 250 works were submitted for Paint Strong Orlando, which are being featured this week through a public art exhibit and reception.

“We’re really proud to show Orlando that the library isn’t just a big downtown building where you can check out books, take classes, and use computers,” Erin Sullivan, public relations administrator for OCLS, said in a press release.

“We’re an organization full of people that really care about our community and are proud to call Orlando home.”

Denmark’s Aarhus Public Libraries, globally recognized as one of the leading library systems in the world, is taking to the streets with their MoBib motorbike for the week. This travelling mobile library will reach people in the places where they live and work, providing an opportunity to learn about library services over a cup of coffee.

The release said the campaign “is inspiring libraries of all types and sizes from California to Croatia to shift perceptions of libraries.”