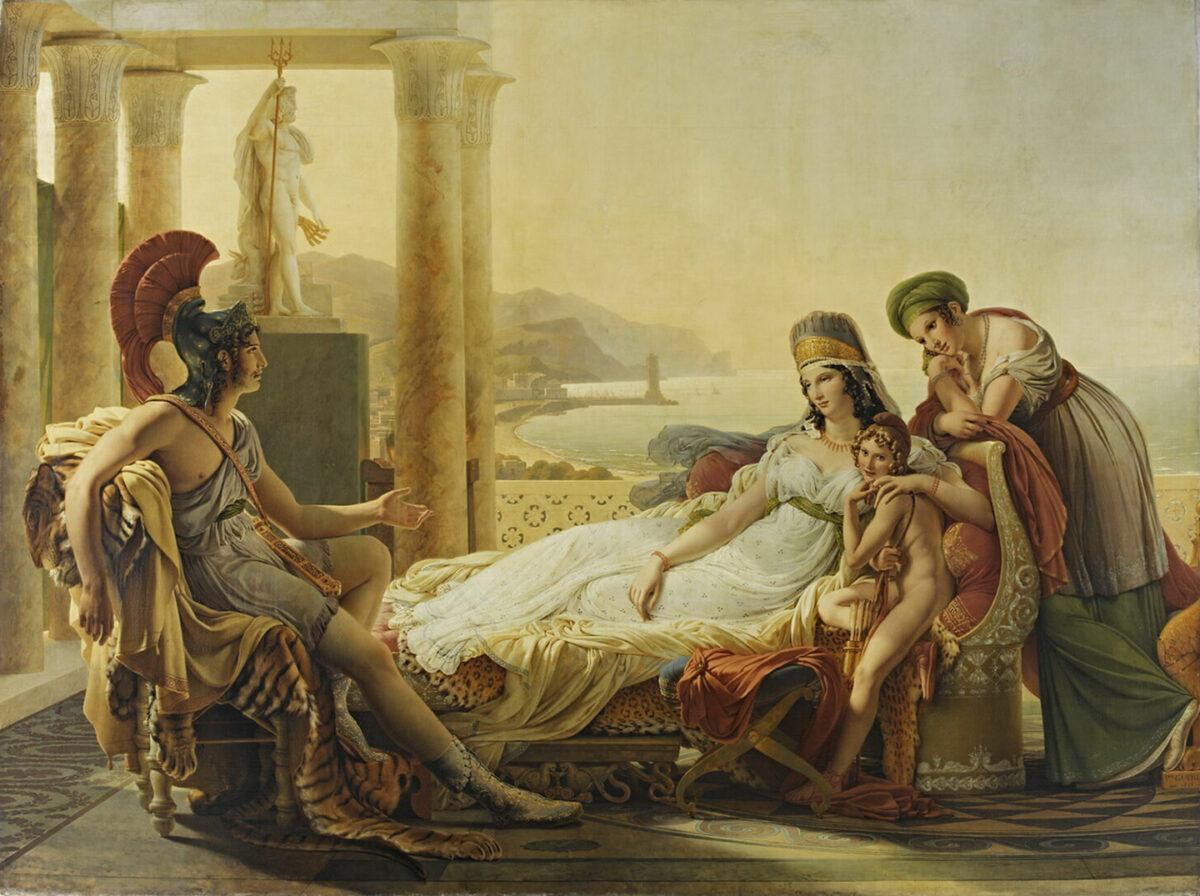 French academic art encompasses numerous traditional genres, from portraiture to still-life, but histories of grand events may be among the most noteworthy of the period. These paintings take inspiration from the past, as the name implies, but artists elaborated on source materials to create nobler, more compelling narratives. Ancient, legendary queens, along with the captivating stories surrounding them, became especially alluring to French artists.

By the 19th century, academies of art were well-established throughout Europe, and the Académie des Beaux-Arts in France was a particular leader in training emerging artists in traditional techniques and subjects. Young apprentices studied under the tutelage of master artists, who in turn ensured that their pupils had opportunities to find patronage.

Likewise, the academy sponsored exhibitions, connected artists and patrons, and influenced public taste. During the first half of the 19th century, artists and patrons alike favored ancient history. This was due to decades of conflict in France. The French Revolution (1789–1799) and Napoleonic Wars (1803–1815) left the French people searching for inspiration further in the past as they rebuilt their new nation.

Among the triumphant ancients is Zenobia of Armenia. William-Adolphe Bouguereau’s 1850 painting, “Zenobia Found by Shepherds on the Banks of the Araxes” exemplifies the emotion and drama of surviving trauma against the odds—a sentiment that resonated with war-weary French citizens.

Bouguereau (1825–1905) is among the most well-known artists of the period. His oeuvre has rightfully become synonymous with French academicism. Bouguereau exquisitely created dynamic compositions and utilized both form and color to achieve an emotional and intellectual reaction from viewers. This effortless marriage of form and color—rather than prioritizing one over the other—is a key tenet of French academic art.

The Story of Zenobia

Rhadamistus was the eldest son of King Pharasmanes I of Iberia during the Pharnavazid dynasty (third century B.C. to the second century A.D.). Fearing his own usurpation by his ambitious and impatient son, King Pharasmanes persuaded Rhadamistus to declare war on his uncle, King Mithridates of Armenia.

Rather than declaring war, Rhadamistus deceived his uncle by feigning an escape from a “feud” between him and his father, Pharasmanes. Rhadamistus did so in order to strategize an invasion of Armenia.

Prince Rhadamistus—known for his ambition, strength, good looks, and valor—charmed his way into the Armenian royal family and married Princess Zenobia, daughter of King Mithridates. Rhadamistus then massacred Zenobia’s monarchical family to usurp the throne for himself and ruled over Armenia alongside her in the early 50s B.C. Their reign was brief; the Armenian people revolted and drove Rhadamistus into exile, forcing both him and Queen Zenobia to flee.

Instead of escaping with Rhadamistus and risking a shameful captivity by his enemies, Zenobia begged him to mercifully kill her with an “honorable” death. Rhadamistus refused at first but then relented. After his ghastly task was complete, he threw her into the river. Miraculously, Zenobia survived and compassionate shepherds healed her with their rustic remedies. They took her to the city of Artaxata where she lived a royal and peaceful life.

Bouguereau captures the most dramatic—and uplifting—moment of Zenobia’s saga: the peasants saving the queen’s life. There is subtle irony at play as France’s own queen Marie Antoinette did not meet the same merciful fate 60 years earlier, but Bouguereau chose to portray and embrace the notions of redemption and unification. His sculptural figures and composition are rendered in a timeless manner, suggesting the universality of this ancient tale of salvation.

Famed academician Pierre-Narcisse Guérin (1774–1833) also chose a queenly subject for his 1815 masterpiece, “Aeneas Tells Dido About the Fall of Troy,” which became a tremendous success at the Paris Salon of 1817. The salon was the official art exhibition of the Académie des Beaux-Arts, and this was possibly the most significant art event of the Western hemisphere during the 19th century.

Guérin, renowned for his artistic range, became director of the French Academy in Rome in 1822. In addition to his own contributions to the French Academy, his students included Eugène Delacroix and Théodore Géricault—two of the most influential painters that France has ever produced.

Guérin, like many of his contemporaries, borrowed from ancient historical-mythological sources. His 1815 artwork portrays events from Book IV of Virgil’s “Aeneid” (written between 29 and 19 B.C.). Virgil, one of ancient Rome’s most esteemed poets, synthesized history, mythology, and literary tradition.

The “Aeneid” follows the Trojan hero Aeneas, who has fled the fallen city of Troy in order to fulfill his destiny of founding the city of Rome. During his voyage across the Mediterranean, en route to Italy, Aeneas finds himself in the North African kingdom of Carthage. There, he meets the powerful Queen Dido. In exchange for her hospitality, she asks the young traveler to regale her with tales of the Trojan Wars and his maritime adventures. Aeneas obliges, and with the help of Cupid’s arrow, the two soon fall in love.

Guérin captures Dido staring adoringly at her guest, while Aeneas energetically relays his stories. While the portrait of the lovers evokes sentimentality, the artist also depicts an appealing Carthaginian landscape in the background. The artist’s palette is sun-drenched, warm, and welcoming. This is noteworthy, as academic artists typically chose colors that would best communicate emotion and atmosphere to their viewers.

The gods commanded Aeneas to leave Carthage, however, as it was both his duty and his fate to establish Rome, and with it, the empire that would change the world forever. Grief stricken, Dido takes her own life once her suitor abandons her.

Although at first glance, the saga seems to have a tragic end, Guérin implies a more poignant, even optimistic, lesson: The founding of a great empire requires equally great sacrifices, but the faithful are rewarded for staying true to their course. After decades of upheaval in France—and sacrifice—Guérin’s viewers could appreciate the promise of glorious times ahead.

Guérin, like Bouguereau, adapted stories of ancient queens for 19th-century audiences in order to celebrate the ascendance of the new French nation. Their academic style embraced a universality that would resonate with generations of viewers. Remarkably, they also developed a unique style that synthesized color and form, the emotional and the intellectual, and perhaps most importantly, beauty and purpose.

Kara Blakley
Follow
Dr. Kara Blakley is an independent art historian. She received her Ph.D. in Art History and Theory from the University of Melbourne (Australia) and previously studied and taught in China and Germany.
SHARE
Friends Read FreeCopyFacebookTweet
You May Also Like