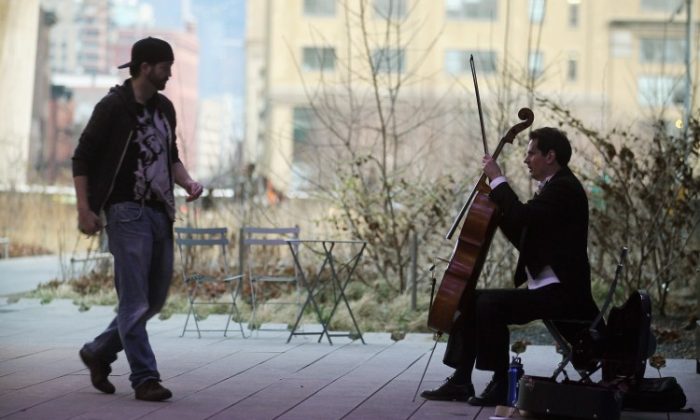 A man walks to give money to a musician performing at High Line Park in New York City in this file photo. For the first time, a study found that giving to others can bring about happiness. (Mario Tama/Getty Images)
Life & Tradition

For the first time, there is now evidence in the form of an American Psychological Association (APA) report to support the belief that it feels better to give to others than it does to buy for oneself.

“Our findings suggest that the reward experienced from helping others may be deeply ingrained in human nature, emerging in diverse cultural and economic contexts,” wrote the researchers in the report’s introduction.

The report is titled “Prosocial Spending and Well-Being: Cross-Cultural Evidence for a Psychological Universal,” published by the APA in the Journal of Personality and Social Psychology.

Throughout several experiments, findings were the same—people around the world like to give, and it makes them happy. Researchers called the resulting feeling a “warm glow.”

They specifically looked at people’s giving in terms of money, and there was not a difference between rich and poor countries, either.

They looked at survey data from 136 countries gathered in a Gallup World Poll from 2006–2008. The data was collected from 234,917 individuals, one-half of whom were male. The average age was 38.

Although not scientifically proven, many wealthy individuals have claimed to find happiness in giving, and researchers took notice.

Warren Buffett, the famed American billionaire, made a pledge in 2010 that more than 99 percent of his wealth would go to philanthropy during his lifetime.

Meanwhile, he said that he and his family’s lifestyles would not change at all based on his donations, and that spending all his money on himself would not bring him happiness.

He said that he only wants to keep what he needs, and give the rest to society.

Researchers examined what Buffett said and wondered, “Does spending money on others promote happiness even in relatively impoverished areas of the world?”

In one analysis, they compared responses from 820 people from universities in Canada and Uganda. The participants wrote about an instance when they had either spent money on themselves or on others.

They were then asked how happy they felt.

The report concluded, “Participants in Canada and Uganda reported higher levels of happiness when they thought about spending money on others rather than themselves.”

Next, they were asked if they spent money on someone else to build or strengthen a relationship. Researchers found that people still felt pretty happy about spending on others even when little personal gain was expected in return—like praise or the shopping experience.

In another example, researchers looked at participants in Canada and South Africa. Participants bought one gift for themselves, and they bought the exact same gift anonymously for someone else. No one outside of the experiment was made aware of the generous act.

It turns out, according to the study, that doing something for someone else rather than for oneself gives people higher levels of positive emotions.