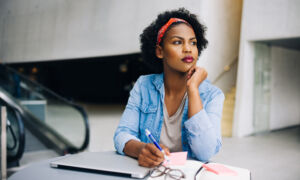 A group of teenage girls will take turns wearing the same blue dress at their school dances this year to honor their friend who died from cancer last year.

Catherine Malatesta died on August 2, 2015, at age 16. She had managed to attend junior prom before her death, wearing that same blue dress.

“I guess for us, it’s a way to keep her spirit and legacy alive,” Catherine’s dad Gregg Malatesta told ABC News. “It’s really special that these girls were so passionate about wearing the dress. That was the last time they saw Catherine out-and-about with her radiant smile and having a great time at the prom so I think for them, it’s pretty special.”

Catherine had received her stage 4 diagnosis of epithelioid sarcoma in November of 2014, and went through months of chemotherapy before passing away.

“She was fearless, she was confident and she had an incredible amount of courage,” her father said.

After Catherine died, some of her friends stopped by her house to mourn, and Catherine’s mother showed them some of Catherine’s things to remember her by, and they spotted her dress.

‘Oops… It Wasn’t Cancer After All,’ Admits the National Cancer Institute/JAMA

“We all tried it on and we said, ‘Oh my gosh, we should all wear this.'” said Emma Schambers, who had met Catherine at summer camp in 2014. “I think it’s really magical that we all fit into the dress.”

Emma is next, and will wear the dress at her senior prom at East Greenwich High School  in Rhode Island, followed by another childhood friend of Catherine’s, Lauren, who will wear it at senior prom at Arlington high.

“Catherine would be very happy,” Emma said. “If she was alive, I think she’d offer her prom dress to us. It’s a very important thing to capture her memory because prom was a very special time for her. She told her mom it was the first time in a long time that she felt beautiful inside and out.”

Related Coverage
When Girl Bought a Prom Dress Online, She Got This Instead