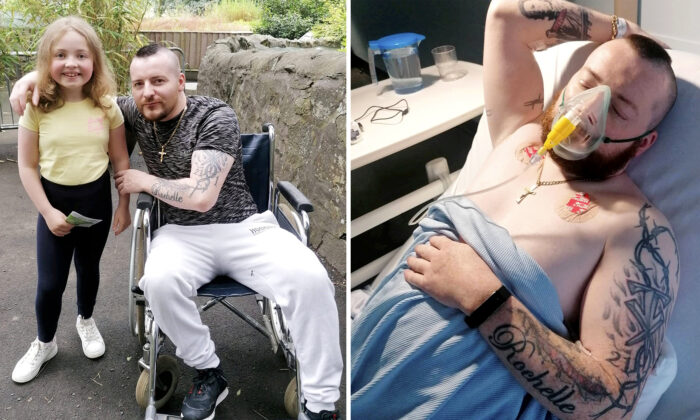 Girl, 8, Saves Dad’s Life After Hearing Him Gasp for Breath in the Middle of the Night

An 8-year-old girl saved her dad’s life in the middle of the night while she was getting herself a glass of water.

Rochelle Ramsey from the Scottish town of Port Glasgow, Inverclyde, became her father’s hero after she heard him struggling to breathe in the night, which turned out to be pneumonia and septic shock.

At 3 a.m. on Sept. 16, Rochelle heard her dad, Chris Ramsey, 38, gasping, and woke up mother Sheryl Oribine, 37. Sheryl called an ambulance to hospitalize her husband, who suffers with multiple sclerosis (MS).

Chris is unable to walk and has a very weak immune system; given his condition, it could have been fatal for him if his daughter hadn’t stepped in.

“Rochelle ran into the room and we realized Chris’s teeth were chattering but his temperature was through the roof,” said Sheryl, who is Chris’s full-time carer. “I remember the paramedic telling me, ‘your partner needs to get to hospital right now.’

“Then they told me, ‘If it wasn’t for your wee girl, he would have died’—and Rochelle had the biggest smile on her face when I told her she saved her daddy’s life.

“I’ll never forget that night for the rest of my life. If Rochelle hadn’t stepped in, I would have woken up and found Chris dead in the bed.”

The proud mom said that other 8-year-olds might have brushed it off and gone back to bed, but Rochelle knew “something was wrong.”

“She’s his guardian angel in disguise,” Sheryl  said. “Chris keeps saying, ‘I can’t believe I’m still alive,’ and calls Rochelle his ‘little hero,’ which is exactly what she is.”

Chris developed MS in 2018. Sheryl had watched the condition grow worse, where he eventually needed to use an electric wheelchair. His immune system had also grown worse, and he would regularly end up in hospital after picking up infections; recently, he had been treated for a chest infection.

The family hoped he was on the mend until Rochelle heard a worrying sound in the middle of the night when she popped to the sink for a glass of water. After hearing dad Chris gasping for breath over the sound of the tap running, she darted into her parents room to wake her mom.

When Sheryl turned around and saw Chris struggling for his life, she was in “total shock.”

“I’ve never seen anyone shaking so much and his teeth were chattering,” she said. “It was a horrendous experience, he was deteriorating before my eyes.”

Chris was rushed to Inverclyde Royal Hospital while COVID-19 measures meant Rochelle and Sheryl had to wait at home. He was stabilized with an oxygen machine and medication. Later, the family was informed that his pneumonia had developed into sepsis, and he had been suffering with septic shock.

Sheryl recalled doctors explaining how close Chris had got to death when he arrived at the high dependency ward; his oxygen levels had plummeted while his heart rate had risen dramatically. They said if he hadn’t got to hospital when he did, he would likely have died in his bed.

“To hear how close he came to death was terrifying, but I was so proud of our little girl in that moment,” Sheryl said.

Chris spent a further three days in hospital before being discharged to recover at home with a prescription of strong antibiotics.

Sheryl said that Chris is doing well and is grateful for his “guardian angel” daughter, who’d been diligently attending to his every need since he’d come home.

“While he was in hospital, all Rochelle could do was ask when Daddy would be coming home,” she said. “I offered to buy her whatever toy she wanted but she didn’t care, she just missed Chris.

“Since he’s been home, he’s been giving Rochelle lots of cuddles and calling her his ‘little hero.’ He keeps saying he can’t believe he’s still alive and he’s so grateful for her.

“I will forever be grateful for what Rochelle did, and we are both so proud of her. If it weren’t for her, I would have woken up in the morning and found Chris dead in the bed, and have had to tell Rochelle her daddy died.

“Not many eight-year-olds can say they saved a parent’s life—she’s his guardian angel.”