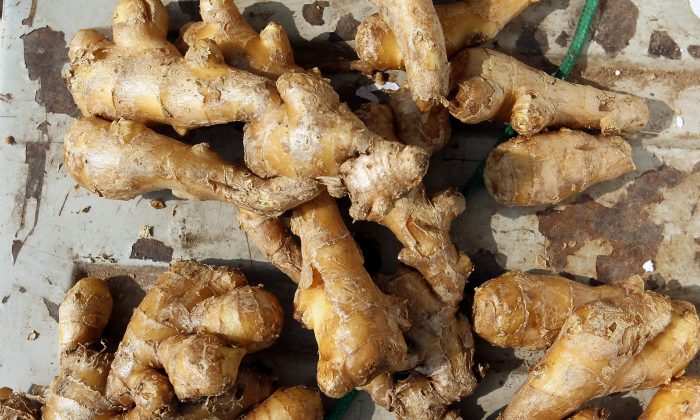 Ginger is an Asian herb that is particularly well known to us in the West. Over time, and with trial and error, its stimulating properties and piquant flavor have been integrated into both our herbal “materia medica” and cuisine.

Brewed as an herbal tea, ginger root is particularly helpful for those people who have underactive stomachs and difficulty producing adequate amounts of the hydrochloric acid necessary to digest their food.

This can often be the case for people who don’t take the time to sit down and relax enough to properly digest their meal. The outcome of a meal eaten in this way, especially if it has high carbohydrate content, can be indigestion and gas for hours afterward.

If you are always eating on the run, or you have a child that gulps food down without chewing properly, then ginger can be of great benefit, aiding digestion and dispelling accumulated gas.

To brew a cup of ginger tea, just infuse half a teaspoon of powdered ginger root or two teaspoons of the fresh root to one cup of boiling water. This can be taken up to four times daily.

Ginger is indigenous to the tropical regions of eastern Asia. Its properties are of course well known in Asian cultures, and it features highly in both the cuisine and medical traditions of the Orient. In the traditional Chinese medical system ginger is classified as a “warming” herb. This is a term which is also present in both the classical Western and Ayurvedic medical systems and generally means that this herb is used to treat those disease patterns which lead to symptoms of “coldness,” including cold and pale hands and/or feet, aversion to environmental cold, aversion to cold drinks, and the need for extra bedding covers.

It is worth noting that the dosages required for effective treatment of Western people with this herb are far smaller than those given in traditional Chinese medicine.

Ginger has also been used since ancient times as a safe and effective treatment for morning sickness. A cup of tea brewed from the fresh root can be sipped as needed to safely allay the nausea. Reference sources on traditional Chinese herbal medicine caution against high doses (3–9 grams daily) of the dried root for this purpose. So the fresh root is best and is considered to be less warming than the dried.

Since biblical times, ginger has helped drive the spice trade. The ancient Romans used it to make spiced wines to treat stomach ailments. They imported vast quantities of it from its origins in the East Indies. They taxed it heavily because of its high demand and traded it throughout southeastern Europe.

When the Roman Empire fell, ginger nearly disappeared from Europe. It was not until Marco Polo discovered an inexpensive source in China that ginger gained renewed popularity in Europe, albeit among the wealthy class.

Medieval Europeans also prepared spiced wines and ciders with ginger and various peppers to relieve those conditions originating from “cold” humors. Ginger remained popular in many European countries including England, which found a ready supply in India. English colonists later brought ginger with them to the Americas, where it remains a favorite for flavoring an array of foods and beverages.