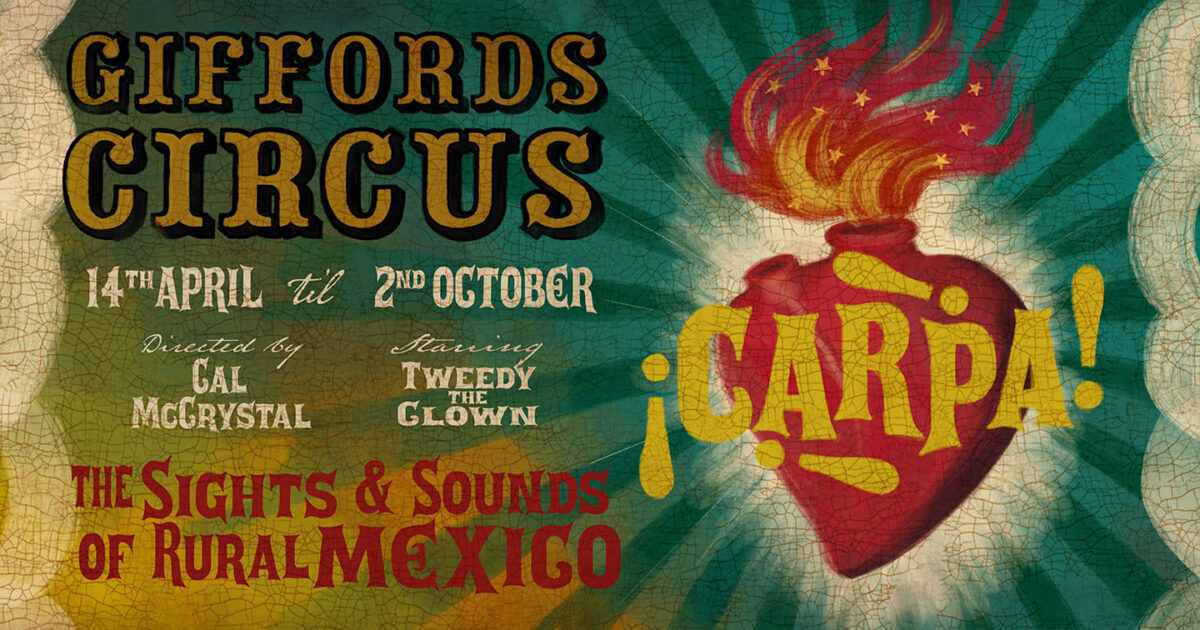 Giffords Circus Brings Laughs and Fun to the Whole Family

If you are planning a visit to the South of England, may I recommend the amazing, the one and only, Giffords Circus?

I recently caught up with the show on the grounds of Sudeley Castle in Winchcombe, a historic town in the North Cotswolds, which boasts a Neolithic burial chamber called Belas Knap that was built even before the Pyramids.

These days, a much less permanent structure goes up for two weeks every spring, and the Giffords big tent draws bigger crowds. Not surprising, as the performance I saw was astonishing. I haven’t laughed, cheered, clapped, and been so totally amazed in a very long time.

The show’s director is Cal McCrystal, whose impressive credentials include The Royal Shakespeare Company, The National Theatre, Sadler’s Wells, and Cirque du Soleil. He writes of this show: “We are bringing performers from Mexico over to join the troupe and with them we will create a show full of skill, humour, turmoil and excitement.”

An excellent seven-piece mariachi-style circus band accompanies the antics in the ring. The themed show is called “Carpa!” which is Mexican for “tent,” but it is also the name of a type of theater.

There were death-defying acrobatics from Los Pachangueros from Cuba, Anna Rastova from Russia, and Randy Forgione Vega from Spain, together with unbelievably complex juggling from half-Mexican Gordon Marquez, and horse-jumping of a different kind from the Donnert family, who are the seventh and eighth generations of circus artistes that began performing in Hungary back in 1886.

Ewa Veradi Donnert’s quick-change act from stunning gown to stunning gown seemed to defy the laws of physics. But I thought the bravest of the brave was Elena Busnelli of The Jasters, as her fate lies entirely in her partner Giacomo Sterza’s hands during their skillful but scary knife-throwing act. Mind you, she also plays the role of “Santa Maria de Guadalupe,” so that might offer some protection.

The main star and founding member of the 20-year-old circus is Tweedy the Clown, who performed hilarious antics with his sidekicks, Jose and Dany Santos. Although, the real boss of their crazy proceedings had to be the unforgettable Adriana Duch Cavello, whose full stage name would blow my word count for this story.

Without giving too much away, the plot revolves around her attempts to find a match for her two beautiful daughters, Daniela and Isabella Munoz Landestoy of the Havana Circus Company, who like to spend their time dancing high in the air suspended only by their hair.

Will she? Won’t she? You will have to go to find out. I can say that today’s on-screen comedians do nothing for me, but Tweedy and Co. got me to laugh once again—and again, and again.

Animal welfare concerns, together with the explosion of online entertainment for kids, made it seem like taking the family out to see a visiting troupe of big-top entertainers was becoming, well, something we used to do.

Indeed, Ringling Bros. and Barnum & Bailey shut down in 2017 after operating for 146 years, largely due to lawsuits that were brought against it by animal rights groups.

But as the saying goes, “the show must go on.” And rather than declining, this performing art form has already adapted and is now amid a 40-year renaissance, with no end in sight.

That new start can be traced back to a bunch of street performers in a small town outside of Quebec City in Canada. In the early 1980s, they showed the world that the circus is very capable of changing to meet modern tastes.

One of those street performers was Guy Laliberté, who co-founded Cirque du Soleil in 1984 as a revolutionary circus without animals. As well as going on to thrill audiences around the world, it spawned a new generation of circuses that provide arenas for new and established acts.

Two years after Cirque du Soleil, the Circus Flora was formed in St. Louis. It has since toured throughout the United States, including at the Kennedy Center in Washington and the Lincoln Center Festival in New York City. It also inspired a remarkable 18-year-old English woman named Nell Gifford to leave her village home in Minety and travel to America to join them.

Her childhood dream had been to start a circus that performed on village greens. Years later, she wrote poetically: “I held the jewel of my childhood up to my eye, and through it I saw ponies and a dressing-up box and a tent, and that was Giffords Circus.”

The only distraction to that quest was when she returned to study English at New College, Oxford. Some distraction.

But soon after graduating, she was back under the big top, this time working with the Santus Circus from France, the Circus Roncalli in Germany—which now includes 3D holographic images of horses and elephants—and the Chinese State Circus.

By 2000, she and her husband, Toti Gifford, felt that it was time to realize her dream and start a circus of their own. However, unlike when Cirque du Soleil got its start, there was no Quebec City celebration around to help them with funding.

Instead, they spent every dime they had and bought a second-hand tent, the biggest they could afford. They also built a maroon-and-gold showman’s wagon to live in and began advertising for local talent.

As the circus grew, so did her search for performers, taking her to Cuba, Russia, and across Europe—from France to Hungary and Romania. But despite its success, Giffords Circus has always been a family project and passion.

Nell once said: “Our costumes are handmade, our animals are trained by us, our sets are painted in the barns on our farm. We burn the midnight oil to conjure new visions for the show. It’s all we do. Circus is our job, our life, our love.”

Yet in 2015, Nell was diagnosed with cancer and that same year her marriage to Toti ended. But she kept on working and even appeared in the show with her daughter, Red, on horseback in 2019, not long before she passed away.

Although she was still so young, she left an incredible legacy: her circus that has brought joy to over a million people already. She also put her Oxford degree to good use and published five books about circus life and history.

If you want to know more about Nell and how she dealt with cancer, you can watch a very moving film made about her by Gem Hall at ept.ms/NellGifford.

And her childhood dream lives on as, every summer, Giffords Circus brings people together—on a village, town, or city green somewhere in the South of England—leaving them happy, mesmerized, and wondering, “How did they do that?”