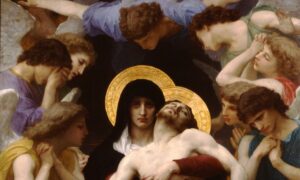 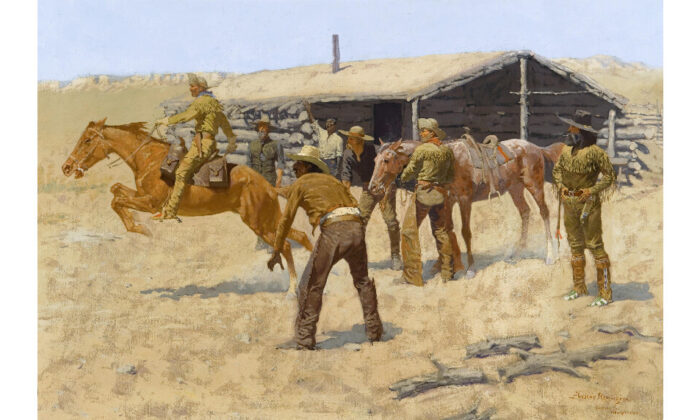 "The Coming and Going of the Pony Express" (1900) by Frederic Remington. (Public domain)
Life & Tradition

Giddyap! ‘The Coming and Going of the Pony Express’

Art is moving you. Let’s think about it. When you read, your mind is transported, maybe to Mount Doom, or the mansion of a sneaky vampire on a stormy night, aboard a submarine deep in the sea, or even into the mind of another man. Through a painting, you may step into a blooming garden, a fiery battle, or even enter into the sorrow of St. Mary. Music literally moves our bodies, not to mention our souls. A movie may engage you so much that you lose track of where you’re sitting!

Why Do People Make Art?

Art is a special kind of communication. When we make or view art, we are forming a connection. We say to one another: I have seen this thing, dreamed this idea—see it, feel it, know it with me.

Art is a kind of bond, a communion between persons, maker and viewer, and, at its best, between ourselves: the minor creators, and the Creator of all.

Whether you think you’re into art or not, guess what? It’s into you. It’s everywhere around you.

Think of art as a distillation of human thoughts and ideas, bottled up and packaged for you to drink and quench a thirst. Though, not everything packaged in pictures or notes is truly art. Art can be tricky to define. You can identify authentic art by certain criteria. It requires a principled aesthetic (concern for beauty), and it should have the power to refresh, elevate, and even at times, alleviate.

When your three-dimensional world gets reinterpreted and condensed into two dimensions, into sound or into the written word, it’s generally the purposeful work of a man or woman. What you experience in such forms isn’t always true art, but it’s still created with artful purpose. Take for example a Justin Bieber tune: it has a beat, but it’s not fine music.

Consider also video games: animated interpretations of life, presented in two dimensions, with a soundtrack. I wouldn’t call such creations genuine art, but whatever the label … those games, those tunes, are moving more than your thumbs! Call it art or call it artificial, either way, as fast as the latest viral trend hits a screen, artful productions are urging, pushing, and persuading. Don’t just go along for the ride. Know where you’re headed!

We are exposed to art and the artful all the time, high and low. If the quality is high and beautiful, art can uplift you. If it’s base, it brings you down.

Just as our bodies run better on fine-quality, clean food, our hearts and minds run better on wholesome ingredients. What we choose to consume with our senses stays with us longer than a bite to eat, in fact, it may influence the soul for a lifetime. Better choose the good stuff then!

So then, let me present to you a piece of art in motion. Painted more than 120 years ago, Frederic Remington’s “The Coming and Going of the Pony Express” is perhaps more moving today than the day it was made. This dusty, bustling scene brings to life a group of courageous men striving to build a nation, mid-leap.

The Pony Express wasn’t a standard mail carrier service. It was certainly grittier than Twitter, Snapchat, or texts. It was the creative solution to the need for faster communications beyond the Rocky Mountains and between the eastern and greatly growing western United States. A railway system was being built but only extended as far as the Mississippi River. Steamships could carry letters, but they had to go around South America or transfer them on land across the Isthmus of Panama. Stagecoaches often took over a month to deliver the mail. Telegraphs were becoming established, but there was a gap.

Recognizing the need for stronger communications in a growing nation, Sen. William Gwin appealed to private entrepreneur and stagecoach owner William Russell. Russell enlisted the help of two men, Alexander Majors and William Waddell, to engineer a solution. It took 400 to 500 horses, the creation of about 190 stations in barren places, the acquisition of provisions and firearms, and the hiring of station masters. Majors also had to find young, brave, and able riders. American ingenuity galloped into the gap!

They made it happen in two months! Eighty riders were hired. One of the riders was said to be 14 years old and named Buffalo Bill, ever heard of him? He and each of the brave boys who took on the job received a Bible, pledged not to drink, swear, or fight other employees, and set off through almost 2000 miles of mountains, lakes, deserts, thunderstorms, bandits, wolves, and dangers unimaginable to most kids now. You should read about it!

Frederic Remington painted “The Coming and Going of the Pony Express” in 1900, 39 years after the last ride. His art, and precious history of American fortitude, continue to make the adventure relevant today.

Remington was an American painter who dedicated his talents to scenes of the West. His compositions draw the imagination into rugged places and heroic times. I find they also lead the eye to the horizon line. While peering into the America he painted, may I suggest you gaze a little further? Ask yourself: “What do I see on the American horizon today? How can I help make it more heroically beautiful?”

Andrea Nutt Falce is a happy wife and mother of four. She is also a Florentine-trained classical realist artist and author of the children’s book, “It’s a Jungle Out There.” Her work can be found at AndreaNutt.com.