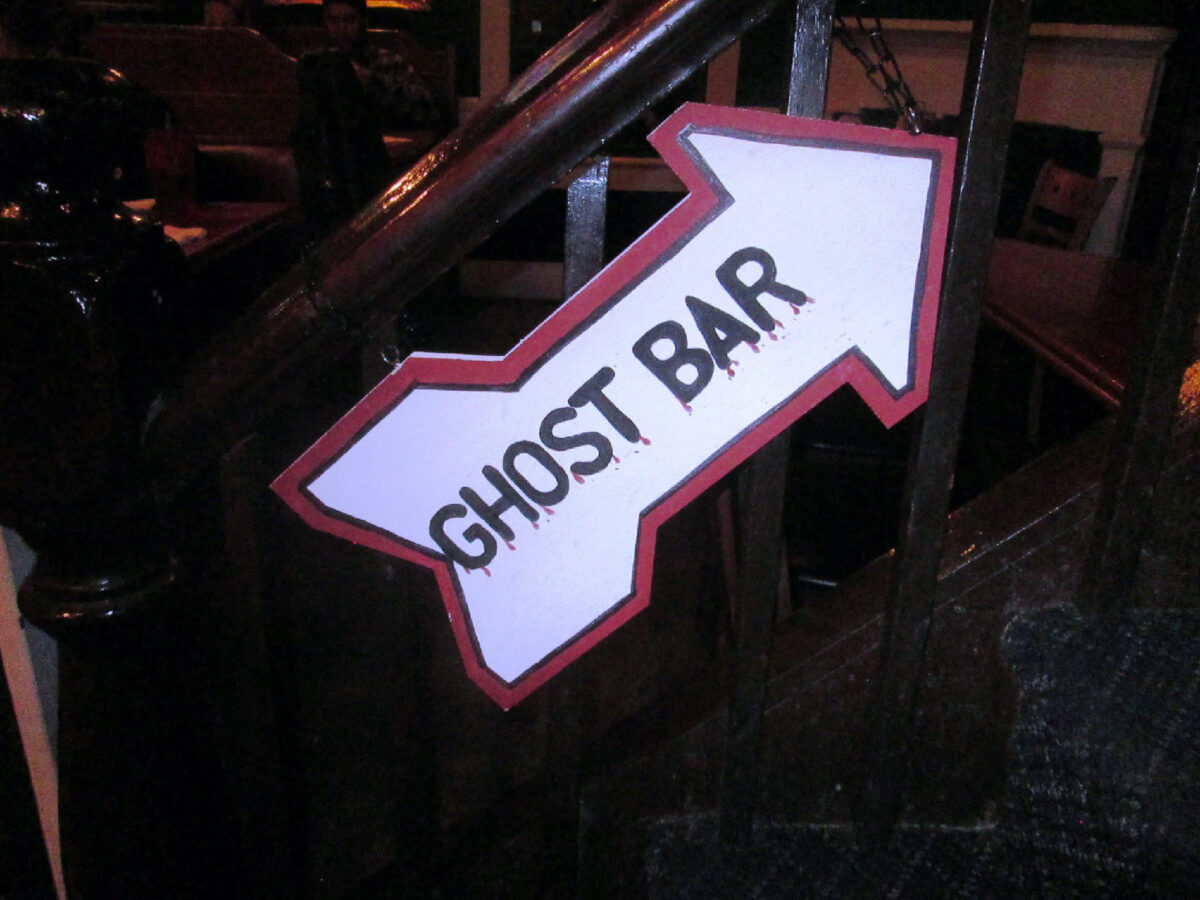 A sign directs participants in a St. Augustine, Florida, haunted pub crawl to their next destination. (Photo courtesy of Victor Block.)
Travel

At 450-plus years, St. Augustine, Florida, is the oldest city in the United States with a lot to recommend it: history, ancient (for this country) architecture, Spanish culture, and, of course, ghosts. A city that old has a lot of history to haunt—a lot of death and despair to permeate the landscape—and the spirits of St. Augustine are sufficient to keep a multitude of ghost-tour operators very busy. I tagged along on a couple.

Outing No. 1 was a Ghosts and Gravestones Trolley Tour. My first ghost-hunting tip: Go for the stormy weather, alleged by dedicated ghost-hunters to provide more energy upon which the “manifestations” can draw. It was misty out: check.

As we hopped on a trolley, we were instructed on the basics of ghost-sightings: Look for little orbs with tails, a white light, a shadow, an apparition in white. At a cemetery fence, not surprisingly always a portal for the undead, cameras were flashing and phones lighting up one after the other. “Why are they all taking pictures of the fence?” inquired my always-skeptical husband. “There’s nothing there.”

The 130-year-old Potter’s Wax Museum building, we were told, was built over a cemetery, thereby explaining all the “energy.” I was beginning to pick up on the idea that energy was just a euphemism for ghosts. Our guide talked of strange things happening, which by the end of the night had become a mantra: footsteps heard, bottles falling, objects flying. As we walked through the museum, I suddenly felt a vibration on my arm—a very intense vibration—and I quickly looked around to see who or what “energy” might be near me. How disappointed was I to discover it was only my Fitbit!

At a visit to the Old Jail, known as the Hanging Jail from 1871 to 1953 for the eight criminals who hung from the gallows, a dramatic inmate told stories of the sadly deceased with great gusto, playing out all the gory details of the crimes. The impersonators were the best part of the tour, but they were all very much alive.

Someone claimed to get a picture of an orb—allegedly a filmy white light with or without a tail—on her cellphone. I looked through the bars into the same very dark cell and all I saw was, well, a very dark cell.

How to account for some of these specter sightings? Shadows, specks of dust, reflections, overactive imaginations? But many claim they capture images on their cameras that are unexplainable—ghosts trying to present themselves in recognizable spirit forms. Who am I to argue?

Given my own penchant for spirits (of the drinking variety), it seemed a ghost-invaded pub crawl would be a good way to combine my spirits with theirs as part of my next phantom-filled adventure.

Not often does my line of work require me to attend an extended happy hour, so when the opportunity to imbibe at four different venues, all in the name of research, presented itself, I felt obligated to attend the Ghost Tours of St. Augustine Creepy Crawl Pub Crawl. Zombie martini, anyone?

Claiming that the theory of ghosts is as polarizing as politics, Brian, the guide, said the spectrum tilts 60-40 in favor of believers.

“Ignore the skeptics,” he admonished. “That’s not why you’re here.”

As we walked over streets that were built over cemeteries and past ongoing archaeological digs, he assured us that residual energies remain. Rarely, though, is a ghost going to come up and say, “Hello, my name is Ralph and I’m going to haunt you tonight.” Instead, he admonished, you have to acquaint yourself with a place and know what to look for—or, more accurately, “share the presence of.”

My creepy crawl comrades kept checking their electromagnetic transmitters to see if they’d connected with any external energies and then snapping their cameras in the hopes of randomly catching them on film. Until we got to the next bar, of course, and started imbibing again. For a while I thought the liquid spirits were overtaking the more ethereal ones. But then we moved on.

The rash of squeals emitted from several transmitters at the corner of Charlotte and Hypolita streets caught everyone’s attention, equaled only by the story Brian then told of the murder there on November 20, 1785, of William Delaney by a jealous rival. I didn’t see Delaney’s spirit anywhere, but I also know this didn’t happen at any other intersection.

We were all more than happy to get to another bar for more uplifting spirits. At Meehan’s Irish Pub, the liquor is held in place by wires because, as rumor has it, the bottles have more than once inexplicably flown off the shelves. Kaiser, who has been bartending there for four years, says he has heard voices, seen lights flicker, had the bathroom door stick for no apparent reason, and sighted a man in overalls.

“If you don’t believe in ghosts, come work here,” he invited.

I ordered another drink.

It’s hard not to be moved by all these stories. As skeptical as I was when I began the trip, how could I dismiss the experiences—often so similar—of so many others? Or ignore some very real tangible evidence ostensibly captured on film?

All I could do was shake my head.