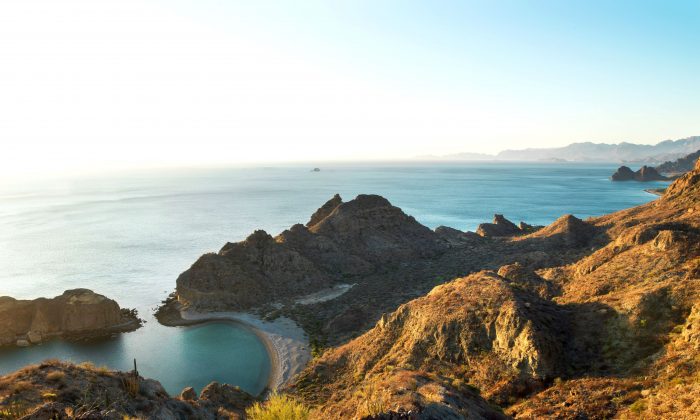 View of the Sea of Cortez from near Loreto. (Villa del Palmar Beach Resorts & Spa)
Destinations

Getting Away From It All in Loreto, Mexico

At one time the Baja area of Mexico was a hot spot for those seeking a meaningful escape from daily life, particularly Cabo San Lucas, at the southern tip of the Baja California Peninsula. Over the last 30-40 years, however, this area has grown to become a major tourist destination, offering a cornucopia of outdoor activities and a robust party scene.

But a six-hour drive away on the coast of the Sea of Cortez is Loreto, a perfect place to ditch the cellphone, kick back, and leave the big crowds behind.

Founded in 1697 by Jesuit missionaries, Loreto is a small town on the east coast of the peninsula, with a charming plaza and boardwalk, historic buildings such as the Loreto Mission and Mission Museum, and a few resorts dotted along the coastline.

I was told the best way to fully appreciate Loreto is by getting out onto the water, and that’s precisely what I did. On a boat adventure on the Sea of Cortez along with several other people, I marvelled at the starkness of the Sierra de la Giganta mountains rising sharply from the water’s edge, contrasting desert and water in a visually striking manner.

Renowned undersea explorer Jacques Cousteau described the Sea of Cortez as the “aquarium of the world.” Over 900 types of fish inhabit the azure blue water along with whales, sea lions, and dolphins.  Most boat tours usually involve a stopover at one of the nearby islands. The snorkelling is sensational, and I found that having the opportunity to have my “own” island for a few hours provided a lovely respite.

Over 900 types of fish inhabit the azure blue water along with whales, sea lions, and dolphins.

If visiting between January and March be sure to take the 1.5 hour scenic drive from Loreto to Adolfo Mateos on Magdalena Bay on the Pacific side. If circumstances permit you might even see grey whales migrating and giving birth. Only licensed guides are allowed on the water with their panga boats during the season. Seeing these beautiful creatures up close is truly memorable.

Nearby Coronado Island, with its white sand beaches and volcanic ash, offers another wintertime treat: the Sea Lion Colony which calls the island home during winter months.

Just 30 minutes south of the Loreto airport is Villa del Palmar Beach Resorts & Spa, a major development that has brought another layer of creature comforts and sophistication to the area.

The Islands of Loreto have a reputation as an excellent year-round sport fishing location, and the Villa del Palmar offers sport-fishing trips as well as scuba diving, hiking and mountain biking, and tours of the five islands.

Another tour takes visitors to the Sierra de San Francisco, home to a large collection of fascinating aboriginal cave paintings estimated to be 1,000 to 1,500 years old. The paintings, which depict hunting, magic, and the renewal of life, have been designated for special protection by UNESCO.

The resort also boasts a new Rees Jones-designed golf course called Danzante Bay. Eleven holes are open now with the final seven to be completed by the end of 2017.  The par-3 17th—jutting out 200 feet above the Sea of Cortez with the water shimmering in the background and the islands adding their solitary presence—is both a golf challenge and a visual tour de force.

Loreto may be a laid-back little town but it’s not short of great places to eat, with restaurants offering the full spectrum of Baja California cuisine at prices to suit all budgets.

What I noticed about eating out in Loreto was that the art of conversation was no less important than satisfying one’s palate, with the jovial nature of the people an enjoyable extension of the eating experience.

In the town centre you can try authentic Mexican food at Mi Loreto, which has a wonderful family atmosphere. The Nopolo Wine Cellar offers terrific Baja wines and full bar service, while at El Ray del Taco, where the locals like to eat, the food is fast and inexpensive. If staying at the Valla del Palmar, be sure to try Danzante Restaurant & Bar.

For something genuinely unique head to Vista Al Mar, the local clam shack. It’s situated on the beach about 30 feet from the water. They serve chocolate clams, named for their Godiva chocolate shell, as well as other tasty fish dishes and, of course, cold beer.

While eating you can sit outside under palm trees, wiggle your toes in the warm sand, and contemplate the ocean. A Corona moment indeed.

New Jersey-based M. James Ward’s strong sense of wanderlust has lured him to all corners of the world. He has written about his travels for a range of publications. He is also a member of Golf Writers Association of America.