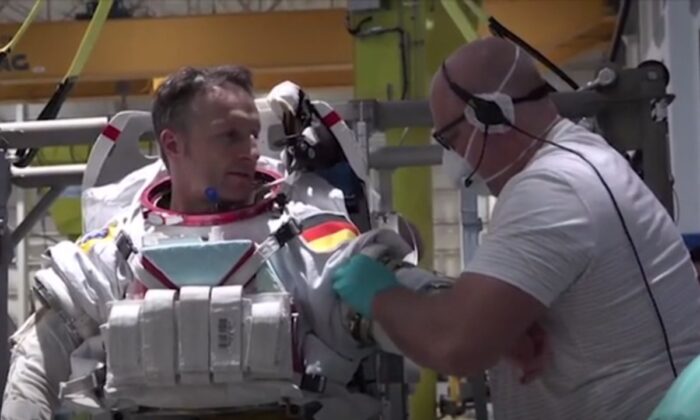 German Astronaut Prepares to Be 600th Person in Space

After being delayed twice, German astronaut Matthias Maurer is hoping to fly to the International Space Station later today, along with the NASA Crew 3 team.

The flight has been delayed by bad weather, as well as an astronaut’s undisclosed medical issue.

Maurer’s will be the second European Space Agency (ESA) astronaut to fly under NASA’s Commercial Crew Program. He spent part of his quarantine picking up rubbish on a Florida beach within range of the SpaceX launch site at NASA’s Kennedy Space Center and on Nov. 1 wrote on Twitter: “Sadly, this is not the only bag I filled. We really need to think about our environmental impact on Earth and in space. Clean oceans, clean space! It’s up to all of us.”

The mission known as “Cosmic Kiss,” is Maurer’s first trip into space. He will stay on the ISS until the new year.

According to ESA, during his mission, Maurer will carry out essential science, research, and operations in microgravity. They said, “The knowledge gained through this work will help preserve and enhance life on Earth as we prepare to explore even father beyond our planet.”

Maurer will become the 600th person in space, according to NASA statistics.

As is tradition for European astronauts, Maurer will be bringing food from his home country for space station residents to enjoy. The choice? Not apple strudel, but a venison ragu from where he grew up in southwestern Germany. Speaking to The Associated Press in October he said: “They chose a venison ragu with a, it’s not the strudel type of thing. It has a name that doesn’t even exist in German. So, it’s a local specialty and it has a potato soup with it. And a dessert comes afterwards, so it’ll be a splendid dish, but I will also offer to my crewmates in space just to show them like what we eat back home and to give them a little bit of European flavor.”

Maurer and the three U.S. astronauts—who range in age from 34 to 61—have been quarantined for two weeks as usual before a spaceflight.

Once on their way, Raja Chari, Tom Marshburn, Kayla Barron, and Maurer will move into the space station for six months.

The newcomers were scheduled to launch first, but NASA switched the order because of bad weather and an astronaut’s undisclosed medical condition. The welcoming duties will now fall to the lone American and two Russians left behind at the space station.

The next crew will also spend six months up there, welcoming back-to-back groups of tourists. A Japanese tycoon and his personal assistant will get a lift from the Russian Space Agency in December, followed by three businessmen arriving via SpaceX in February. SpaceX’s first privately chartered flight, in September, bypassed the space station.

This will be SpaceX’s fourth launch of NASA astronauts and its fifth passenger flight overall.

NASA turned to SpaceX and Boeing to transport crews to and from the space station, following the retirement of the shuttle fleet in 2011.