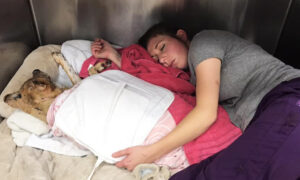 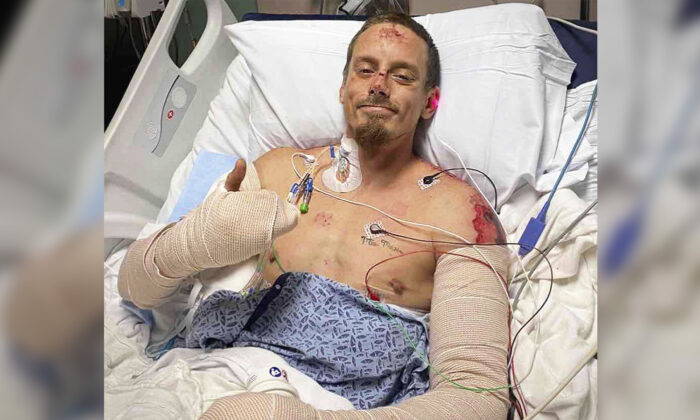 Georgia Man Saves His Whole Family From Housefire, Suffers Severe Burns to His Arms, Back

It’s hard to know how you’ll respond in an emergency until you’re faced with one. For one Georgia father who was faced with a housefire, his reaction might’ve saved his family’s life.

When Brandon Slater’s home on Flanders Road was engulfed in flames on Friday, Dec. 4, he didn’t think twice about running through the fire to get his children safely out of the house.

“My whole house was in flames,” his wife, Brandy Slater, said in an interview with FOX 5. “It was really, really terrible. I don’t want to go through this again.”

After the fire died down, Brandy and her children came back to see the ashes of their home of 10 years.

Holding back tears, Brandy said, “Now, I just feel really bad because my husband’s in a lot of pain and I couldn’t help him.”

Brandon was severely burned by the fire, and is currently being treated at Grady Memorial Hospital.

Brandy recounted the incident, saying he reacted to the fire instantly:

“He opened up our bedroom door. He slung it open and said, ‘Oh my God, the house is on fire.’ He took off after the kids.”

In a split-second reaction, Brandon ran through the fire to help the children out of the house and to safety. Fortunately, he was able to get everyone out of the house relatively unharmed, with only two children sustaining minor injuries.

“He had sustained a lot of burns to his arms, severely to his hands, his back, and his shoulders,” said Brandon’s sister, Melissa Willis. “Assuming from breaking out a window, he had torn his arms and hands up pretty bad. The muscle and everything’s exposed, it got burned really bad.”

She added that the kids are pretty torn up about what happened.

“They’re pretty emotional about it,” she said. “They are talking about what happened.”

Though the cause of the fire has not yet been determined, the family suspects it was an errant space heater.

The family lost all of their possessions, but Brandy says she’s just grateful things didn’t turn out worse.

“I just thank God that my husband and my children are alive,” she said.

Brandon is the family breadwinner, but he will be unable to work during his recovery. His mother, Lynn Pavlik, set up a GoFundMe to help with his medical and household expenses.

“In the coming days, weeks, and months as they face the reality of losing their home of 10 years and all their possessions, I’m asking everyone to pray that God gives them strength and direction,” the crowdfunding page reads. “Let’s pull together and help this family as they have a long road ahead of them.”

The community has already shown incredible support, donating over $145,000 in funds to help the family replace their home. However, they still have a long road and a litany of expenses ahead.

On Dec. 14, Lynn posted an update on their GoFundMe:

“Today was the boys’ first day back to school. After 2 weeks away, they were excited to see their bus driver, teachers, and friends. They arrived home after school with big smiles on their little faces and backpacks full of homework. They are acclimating to a new schedule nicely.”

She added that Brandon is still in the hospital but may be discharged soon.

“He still has a lot of pain on his legs but continues to stay positive,” she wrote. “His plastic surgeon will examine his hands and he will meet with his burn team tomorrow. If everything looks good, we are hopeful he will be discharged sometime tomorrow.”