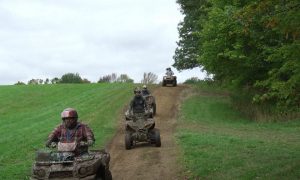 If you’ve never heard about geocaching and are interested in a new form of treasure-hunting, this relatively new hobby will definitely pique your interest.

This May was the official start of the Farm Art Trail GeoTour through which artists from the Wallkill River School of Art have teamed up with 15 farms that are open-to-the public to create an on-going geocaching event.

Geocahing is “like a high-tech treasure hunt,” said artist and Executive Director for the Wallkill River School, Shawn Dell Joyce. She spoke to Epoch Times about the game which, admittedly, might seem a tad complicated to those not bitten by the geocaching bug.

The idea for the Farm Art Trail came from a special meeting called a charrette hosted by the Wallkill School where artists met with Orange County farmers to generate ideas that would improve the economy of the area.

The Wallkill School has been involved in previous partnerships with farms that included a local foods cookbook, as well as hosting art classes directly out on farms. They hosted the charette in 2011 and when the farmers heard about geocaching “they responded with quizzical looks,” said Dell Joyce. “Most of the farmers had never heard of this kind of hobby.”

But they became interested once they understood the advantages of being part of the tour.

“We wanted to bring customers directly to farmers’ doors. This is a way to reach an audience that might not go to farm markets,” said Del Joyce.

A lot of the geocahers have since told Del Joyce that they didn’t even know that these farms existed, even though they live in the county. So the farms are getting exposure from a brand new audience.

This is a way to reach an audience that might not go to farm markets.

The 15 farms on the tour were chosen in conjunction with Orange County Tourism who advised the arts school about the criteria, and the Orange County Arts Council. The project was recently funded by a federal grant from the National Endowment for the Arts “Our Town” geared specifically to creative place making, and by the New York State Council for the Arts (NYSCA) with the support of Governor Andrew Cuomo and the New York State Legislature.

To be included, a farm has to have a store that is open to the public through which to sell its produce, which also means that it has adequate insurance in order to be able to have people on the property.

The geocach is a hand painted box that contains: artists’ trading cards that are printed with the artists painting of the farm, a secret letter of the alphabet, and a log book. Each geocach is placed outdoors attached to a sign that says “FarmArtTrail” away from the farmer’s house.

The geocachers find the GPS coordinates for the geocach in a brochure found on www.WallkillRiverSchool.com or it can be downloaded as an application from www.Geocach.com The coordinates leave the players within 10 feet of the geocach.

Once located, they open the geocach, take one of the artists’ trading cards, jot down the secret letter and sign their name in the log book to show that they’ve been there.

At the end of the tour they put all the secret letters together and they come up with the secret phrase which gets them a geo-token—a small metal coin stamped with “FarmArtTrail”.

The final step is when they go to the website and log in the token, which is track-able by the trail organizers, and shows that they completed the tour, as well as where they came from.

According to Dell Joyce, there are anywhere between 50 to 100 geocachers who participate in the Farm Art Trail per week and they are not all from Orange County or New York state. One person came all the way from Boston.

“They stop in at all hours day and night. There’s a geocache hidden in our school, and I see them out quite a bit,” said De Joyce.

The last step on the geo-tour is to get their token at the Wallkill River School of Art gallery in Montgomery. There the geocachers can see the work of the artists who have painted each of the farms, as well as the artist trading cards inside the geocaches.

Art work from the farm art trail is currently on display at the Wallkill River School gallery and every month, for the rest of the year, there will be consecutive solo shows from each of the artists on the farm art trail.

Jackie Pierson, owner of Pierson’s Farm, has noticed the treasure hunters coming to pick up the secret letter from the geocache.

When she first heard about geocaching she thought it was “kind of odd,” but now she appreciates that it is a different type of search. She said that even her niece is doing it.

“My location is so difficult to find as a business owner, so it’s kind of exciting to see people just being able to find it. It’s interesting how they can actually get their letter,” she said.

Pierson also mentioned that she enjoyed it when the artists came to paint her farm while her customers also enjoyed seeing the artists.

“I appreciate being on the trail because it does show my farm. I like the art trail. I want them to know where my farm is.”

Most of the geocahers go to visit each farm when it is open, and when they log in their finds, the talk about the farm and what they purchased there. And according to Del Joyce, they really enjoy the chance to meet the farmers.

While Del Joyce is not a participant, she is amused by the game and is surprised by its growing popularity, with these type of geo-trails being held around the world.

“It’s a whole different world. It’s a subculture,” she said.