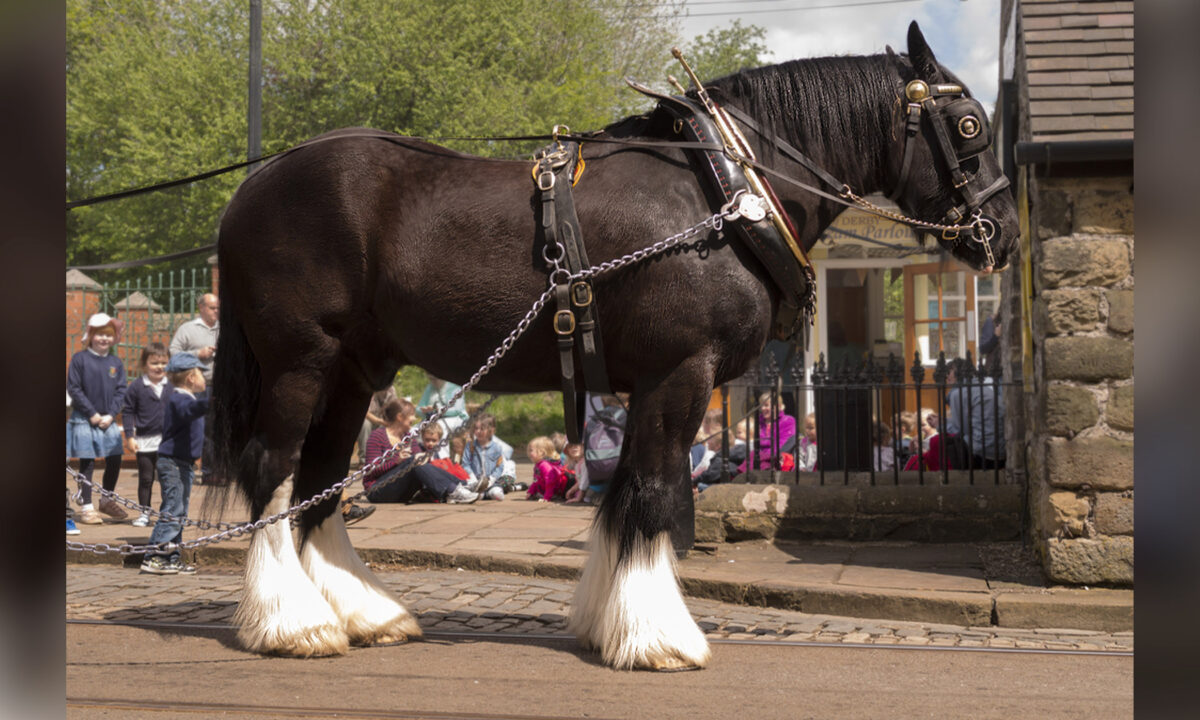 Out of the approximately 300 horse breeds in the world, some of the most impressive are also the most gargantuan. Each has its own set of unique qualities which allows it to undertake particular tasks.

Large horses are commonly referred to as “gentle giants,” as they often display patience and docility, in addition to awesome power. Large breeds are generally draft horses, bred mainly for work.

Here, we highlight five of the most massive breeds in the world.

Among the most well-known large horse breeds in the world today is the Clydesdale. Originating from Clydesdale, Scotland, these horses were first used as farm horses, pulling carts and working fields.

In the modern day, they were used in parades, on small farms, and in pulling competitions. The standard weight for a mature Clydesdale is approximately between 1,800 and 2,200 pounds.

Horses of this breed stand out for their high-stepping gait, despite having a lighter build compared to other large horse breeds.

Most Clydesdales are bay in color and have white spots on their feet and faces, though others have white markings under their bellies.

For those keen on breeding these horses, regularly grooming the feathers on their lower legs to eliminate the risk of irritation is important.

The shire is the biggest horse breed in the world. Like the Clydesdale, they were originally bred for work and were traditionally used for towing barges down canal systems, pulling carts, plows, and other heavy farm equipment.

The standard height for horses of this breed range from 17–19 hands, with a weight of between 1,800 to 2,400 pounds. With their massive size, shire horses are quite impressive to look at, betraying their uncanny power and capability.

In modern days, shires were used for delivering ale from breweries, leisure riding, and undertaking forestry work. These horses are also among the most perfect breeds for riders in their debut stages of learning to ride.

However, with the industrial revolution, which has led to farm mechanization, the number of these horses in the world significantly dwindled, approaching extinction.

The Percheron breed got its name from its area of origin—the area around the Huisne river valley in France, initially called Perche.

The standard height for a mature Percheron is between 1.55 meters (about 5 feet) and 1.93 meters (about 6.3 feet), depending on where it was bred.

The horse’s stout neck shows the influence of oriental breeds, yet the Percheron has the same capability and power as other large horses.

Traditionally, these horses were used for war. In modern days, they were used in parades and for leisure riding. They are also ideal for heavy riders, thanks to their cool temperament.

Mainly known for their docile temperament and great strength, Belgian horses are descendants of the Flemish “great horse.”

The great horse was bred for battle and originated from the Flanders region. A mature Belgian weighs approximately between 1,800 and 2,200 pounds, with an average height between 16 and 17 hands tall.

The typical color of a Belgian is bay, roan, or chestnut. In the modern day, Belgian horses were used in pulling contests. They have long rested on top of the podium, generally dominating in such competitions.

Dutch draft horses came along as a result of cross breeding Belgian draft horses and Ardennes after the First World War.

The Dutch draft has a heavyset body, just like their parent breeds, and are among the strongest horses in the world.

In the earlier days, these horses were quite popular in Groningen and Zeeland, where they were used for heavy farm work and hauling.

In the modern day, Dutch drafts were used for pulling logs in farm shows and competing in plowing competitions.

A mature Dutch draft ranges from 15 to 17 hands in height, making it shorter than other large breeds.