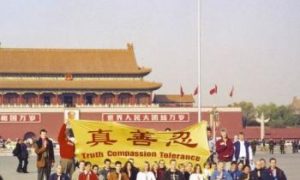 General Manager: Shen Yun Artists Have an Extraordinary Depth to Their Work

Mr. Yang is interested in cultivation and has an open-mind. He expressed his viewpoint on the first program, When Kings Followed the Creator to the Earth, saying, “There is no need for humankind to fuss over trifles, we should have an optimistic mindset.”

Mr. Yang stated that the animated digital backdrops were precisely coordinated with the dancers on the stage. He called it a world-class performance, and said the performers probably go through rigorous training, which brings an extraordinary depth to their work.

He also added, Our Story was very moving. … I was touched very much by Shen Yun’s performance.”

In addition, he said that he liked the story-based programs, such as The Monkey King Outwits Pigsy. “The antics of Pigsy were presented intriguingly, and Little Mischievous Monks was likewise lovely and adorable!

"As for My Beloved Yi Village, it was my first experience of seeing such exquisitely beautiful traditional Chinese dance,” he said. He further mentioned that he would like to return to see the show again next year and hopes to share the experience with is friends.