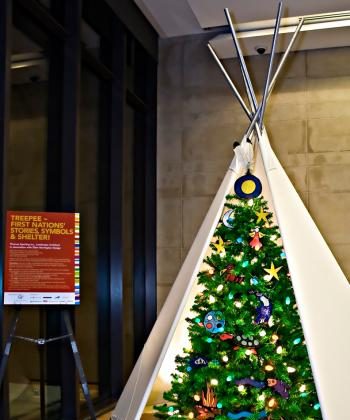 By Susan Hallett
biggersmaller
Print
The Gardiner Museum in Toronto has an annual exhibition of beautifully decorated Christmas trees. This year’s “Twelve Trees of Christmas,” each done by one of the city’s top designers, used the theme of “Children of the World.”

The display begs a look into the tradition of bringing evergreens indoors at Christmas.

Christmas, as celebrated in eastern Europe, dates from the Middle Ages. At that time, the Christmas tree was already a tradition in Germany where the trees were called “Paradeisbaum,“ or paradise trees, and were taken into the house in celebration of the yearly Feast of Adam and Eve on December 24th.

In Northern Europe, even earlier Germanic people had festivals honouring their god, Woden. Trees, especially evergreens, were seen as symbols of eternal life.

Typical English traditions include decorating with holly and mistletoe and the giving of gifts at Christmas.

The Christmas tree was a tradition started by royalty in England because of their German roots. In fact, the Puritans were very much against the Yule (old English word for Christmas) log, holly, and mistletoe. Oliver Cromwell actually lumped Christmas trees and carol singing into what he called “the heathen traditions.”

The custom of having a tree in the house was brought to North America by German immigrants circa 1700. It wasn’t until the middle of the 19th century, however, that Christmas trees became popular — probably because President Franklin Pierce (1804-1869) put up a Christmas tree in the White House.

Today, Christmas trees are brought into the homes of people of many different faiths and of those who do not have any religious beliefs. And Santa Claus still visits the children of the world to leave presents under those trees.

What could be more special than a cuddly teddy bear waiting for a child under the tree on Christmas morning?

Inspired by their own childhood memories, the designers of the Gardiner display have gathered a wonderful and varied collection of bears to delight every child, young and old.

Looking carefully at the tree you’ll see lots of activity. Baby bears are heading off to bed with their own teddy bear in their arms. Some bears are making snowballs outdoors while other bears are preparing for Christmas as they hang garlands and wrap presents. Mama bear serves a plate of sugar cookies while Papa bear brings home a tree from the forest.

It has been said “Teddy bears don’t need hearts as they are already stuffed with love.”  The designers would certainly agree.

The whole exhibit can be seen at www.gardinermuseum.on.ca/eve-12trees.aspx

Susan Hallett is an award-winning writer and editor who has written for The Beaver, The Globe & Mail, and Doctor’s Review among many others. She is Managing Editor of Society Magazine. Email: hallett_susan@hotmail.com