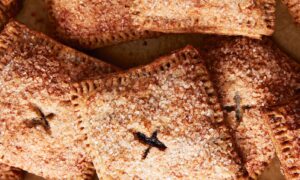 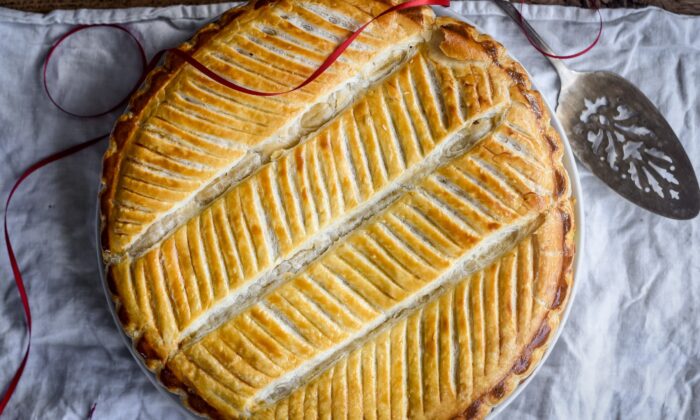 Before wrapping up the holidays, there is one final occasion the French take to eat and rejoice: the Fête des Rois, or “Feast of the Kings.”

Held on Jan. 6, the 12th day of Christmas, this celebration involves eating a galette des rois, or king cake—two circles of buttery puff pastry filled with sweet, creamy frangipane—in which a trinket, called a fève, has been hidden. If your slice has the fève, you are crowned honorary king (or queen) for the day.

Traces of celebrating the Fête des Rois date back to the 14th century in France. The holiday celebrates the Epiphany, a Christian feast day commemorating the arrival of the Three Wise Men—or Three Kings, “les rois”—visiting Jesus after his birth.

Some would argue that the galette des rois tradition can be traced to even earlier, back to ancient Rome and the Saturnalia celebration, a festival held in honor of the Roman god Saturn. The custom was to elect a “king” for the day, who would give orders to people and preside over the partying.

In any case, it was during the Renaissance and beyond that, the sharing of the galette des rois and ritual drawing of the kings became highly popular, with everyone from common folk to royals celebrating the day. King Louis XIV was said to be particularly fond of this ritual, and threw extravagant banquets every January for the occasion.

As with many old religious traditions, the Fête de Rois gradually became a non-spiritual celebration. Today, the ritual of eating a galette des rois is first and foremost a festive occasion to gather with your friends and family, wrap up the holiday season, celebrate the new year, and share best wishes—regardless of your religious background.

Just like the bûche de Noël in December, galettes des rois pop up in virtually every bakery in France when January rolls around. They’re always sold with gold paper crowns, to be offered to the fève-finding king or queen. An estimated 30 to 40 million galettes des rois are sold every year in France. This is a beloved French tradition, and many take the chance to eat multiple galettes throughout the month of January if they can.

Giant galettes are even delivered to the Élysée Palace every year, for the French president and his select guests to share and enjoy. The only difference to note is that these presidential galettes never include any fèves, nor come bestowed with gold crowns.

Making Your Own at Home

Before diving into this recipe, it should be noted there are, in fact, two kinds of “king cakes” in France. The first one, often found in the south of France, is a yeasted, brioche-like cake shaped like a crown and usually topped with colorful candied fruit.

The second, found in the north of France, is the one made from puff pastry filled with frangipane, a simple almond cream. This is the most popular version of the galette des rois, and the one you’re most likely to stumble upon in Parisian bakeries. Here’s how to make it.

For Puff Pastry, Stick With Store-Bought

For convenience, use frozen, ready-to-bake puff pastry sheets that can be found in the freezer section of any grocery store. When working with puff pastry sheets, it’s important to keep them well-chilled, as they tend to become sticky and difficult to work with once they warm up. Once you take them out of the fridge, work quickly to assemble the galette.

Play With the Frangipane

The frangipane filling can be made ahead and will keep for up to three days refrigerated.

Simply adding almond extract to the frangipane will give it its classic taste, but the beauty of making your own galette is that you can tweak it as you want. Try adding 2 tablespoons of cocoa powder to the filling, for example, or a layer of sliced apples or pears on top. Another spin is to use ground pistachios or hazelnuts, instead of almonds.

Nowadays, most bakeries’ galettes include a plastic trinket, while just a few still include the traditional hand-painted porcelain fèves representing a nativity character.

If you can’t find a fève to bake into your galette, you can use a whole almond.

A big part of why galettes des rois are so popular is the fun of la fève: Everyone hopes to find it in their slice. So to keep the game fair, when serving a galette, tradition dictates that the youngest guest hide under the table and call out guests’ names, who are then served their slices. No cheating allowed!

As with a croissant or any other puff pastry, a galette des rois is best enjoyed the day it’s made, either warm or cooled to room temperature.

Make the filling: In a medium bowl (or the bowl of a stand mixer), combine the almond meal, sugar, salt, and orange zest. Add the butter, and use a spatula (or the stand mixer) to cream together all the ingredients, until the butter is fully incorporated. Stir in the eggs, one at a time, followed by the almond extract. Cover the bowl with plastic wrap and chill for at least 15 minutes (for the filling to firm up slightly) or up to 3 days before using.

Build the galette: Thaw the puff pastry sheets according to package instructions. On a lightly floured surface, roll out the sheets into circles 9 1/2 inches in diameter; if using square sheets, use a plate or a cake pan to cut out circles of dough. Place circles on the plate and chill for at least 30 minutes.

Preheat the oven to 375 degrees F. Line a baking sheet with parchment paper and prepare two small bowls: one with water, and one with the egg yolk and milk mixed together, for the egg wash.

Remove the puff pastry circles and filling from the fridge at the same time. Lay the first pastry circle on the parchment paper-lined baking sheet. Spread the almond filling in the middle, leaving a 1-inch border. Stick your fève (or a whole almond) somewhere in the filling. Brush the border generously with water and quickly cover the galette with the other circle of puff pastry. Press down all around the border to seal the edges—make sure they are sealed well, or the filling will escape during baking.

Flute the sides of the galette, using a knife and your fingers (see photo). Brush the whole galette generously with the egg wash. Use the tip of a small knife to score a design on top of the galette and poke a small hole in the middle of the top layer, to let steam escape while baking.

Bake for 30 minutes, until the galette is golden. Right out of the oven, the galette will be puffy, but will deflate when cooling down. Transfer to a cooling rack.

Serve warm or at room temperature.

Audrey Le Goff is a French food writer, photographer, and creator of the food blog, Pardon Your French, where she shares recipes and stories from her beloved home country, France. She is the author of the cookbook “Rustic French Cooking Made Easy” (2019). She currently lives in Niagara, Canada. Follow her on Instagram @pardonyourfrench