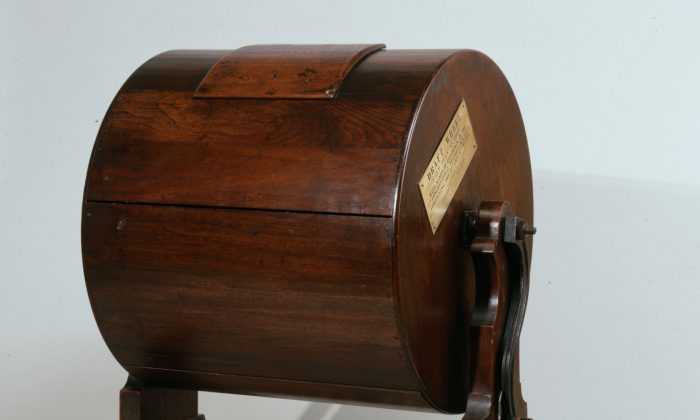 From the Subway Token to the Bagel: New York City in 101 Objects

The following year, New York Times urban affairs correspondent and native Brooklynite Sam Roberts sought to do the same for New York City with a group of 101 objects—because if the human world could be illustrated in 100 objects, the Big Apple would need one more.

“My conceit was that you couldn’t do New York in 100 objects—you needed at least 101,” Roberts said. “So I went to curators, museum directors, librarians, history professors … the general public, and our readers and said, ‘Give me ideas.'”

The project thus began with a New York Times article that listed 50 objects or icons in New York City. After a call for suggestions elicited “hundreds and hundreds” of responses, Roberts was ready to release the resulting book, published by Simon & Schuster.

This month, the New-York Historical Society opens a show with 30 of those objects drawn from the society’s collection.

The exhibit looks like the contents of a time capsule parceled out onto teal velvet displays.

The objects exhibited cover some of New York City’s greatest achievements (a section of the Atlantic cable, which first opened instant communication to Europe), greatest failures (a chunk of wooden pipe from Aaron Burr’s harebrained water supply scheme), and greatest tragedies (a wee pair of shoes retrieved from the sunken General Slocum, and a jar of dust from ground zero).

They put the mundane facts of New York life—like commuting—into perspective. We see the inaugural subway throttle (still shiny) which the first train operator used in 1904. That makes the subway system 110 years old! (Which, disgruntled New Yorkers would quip, is no surprise judging by crumbling stations and creaking tracks.)

Of course there are food items on the list. We have a potato, recalling the arrival of the first Irish-Americans. The still-ubiquitous Anthora paper cup is a nod to Greek diners and street carts. The bagel is obvious and cannot be left out. And neither can we omit the black-and-white cookie, present at the checkout counter of nearly every bodega.

A Dutch-English dictionary, pages yellowed, reminds us that New York used to be New Amsterdam, and unlike Boston, which aspired to be John Winthrop’s “city upon a hill,” was meant by its enterprising fur-wearing founders as a base for trade, and trade alone.

The items also startle us back into the present—to points on the globe in the throes of political turmoil: A piece of George II statue decapitated and hacked to pieces—a sight so raw it made George Washington gasp—brings to mind not-so-long-ago topplings of Lenin and Hussein statues.

Given the constraints of a mere 101 objects, not everyone can be pleased.

“The hardest thing was you don’t want to weigh things by their [available] numbers or nostalgia, or people’s memory, because they will be overrepresented by things in the last couple of decades,” Roberts said. “You want to be representative of ethnic, racial, gender groups, but not be overly representative in a way that skews it too much.”

Since the exhibit includes less than a third of the full list, expect plenty of gaps in time and theme.

For example, on the original list of 50, but not in the exhibit, are multicolored beads excavated in 1991 just north of City Hall. In the 1700s the area stood outside city limits and served as a burial ground for enslaved blacks. Slavery existed in New York until 1827.

Even though it’s impossible for Roberts to be exhaustive, the objects on display are thought-provoking and evoke aspects of the city’s history rarely considered or remembered.

Our parks and sidewalks are littered with monuments, statues, and plaques that tell stories, but to be shown the artifacts through which those stories were enacted—it not only thrusts facts into the head but feelings into the gut. And that’s the whole point of museum exhibits, isn’t it?

Sam Roberts’s book “A History of New York in 101 Objects” will be released by Simon & Schuster on Sept. 23.