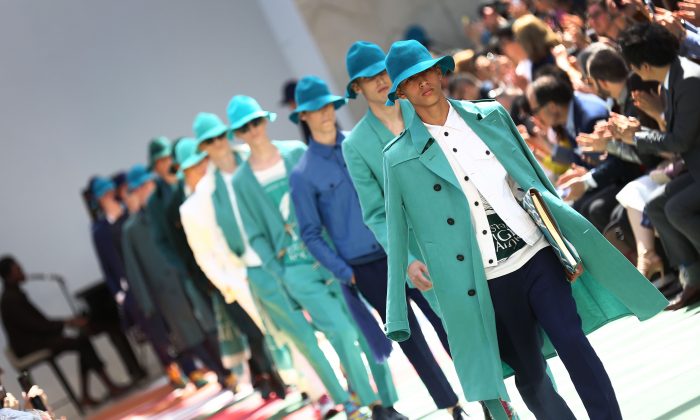 From the Somme to the Catwalk: The Story of the Trench Coat

The words “trench coat” might make you think of a stylish, clean, unisex jacket. That feeling of exchanging your heavy winter coat for smart belted beige, striding down the street in springtime. Or perhaps they remind you of spies, or Tintin, or New York gangsters.

You probably wouldn’t immediately associate them with the muddy reality of World War I. But that, of course, is where the design emerged: from the harsh conditions of the trenches, 100 years ago.

Something like a trench coat (by a different name) was first seen in the late 19th century, when it was used for sporting pursuits in the English countryside. And so when it was presented as an optional item of military kit for World War I officers on the western front, advertisements portrayed the war using images reminiscent of the countryside at home.

This is seen in Siegfried Sassoon’s 1928 novel Memoirs of a Fox-Hunting Man, where protagonist George Sherston likens the war to an adventure in the English countryside, having grown up with sports such as fox-hunting and cricket. The novel is dotted with references to scarlet coats, worsted gloves, mackintosh coats, and the odour of leather. Soon after George is fitted for a uniform, at Craven & Sons in London, his short-lived romance with war ends.

Nothing could prepare civilians for the horrors of the trenches, and few things were designed with the realities of technological warfare in mind. Initially, soldiers were kitted out with the greatcoat, which was far too heavy for the rain and mud. Soldiers were often forced to alter their own uniforms in response to trench conditions. A photograph of Henry Williamson, a private in the London Light Brigade, on leave in 1915, reveals the ragged edge of his greatcoat, where he used his bayonet to hack off two feet of fabric to lighten the garment, which was weighed down by wet mud.

The British army wore a khaki uniform, a tunic and trousers, with puttees (strips of cloth wound around the lower legs), a cap and a greatcoat. Officers were distinguished from other ranks by the style of their uniform, which retained some traditional features; they were also allowed to get their own uniform made. To do this they usually made a visit to their tailor. But Kitchener’s “new army” swelled the regular army to four times its original size, so that by Christmas 1914, recruitment patterns to the British officer corps had changed. A significant number of officers could no longer afford to source their own uniform. Neither were they familiar with upper class leisure. Many who wore the trench coat in the war had never known it as a sporting coat.

When uniform manufacture went out to the trade, a range of civilian outfitters began to supply mass-produced garments to officers, a system normally associated with clothing other ranks. This was how various firms, including Burberry and Aquascutum, began to sell versions of the trench coat from 1917.

The trench coat was different; it was a truly modern piece of kit, created specifically as a practical garment for British officers enduring the muddy conditions of the trenches. The light fabric gave soldiers mobility, while water-repellent material protected them from wet weather on the western front. Its large pockets kept maps dry and cleverly placed flaps offered ventilation and helped to deal with odour.

Developments in technology during the war meant that clothing started to become more and more significant to survival. Protecting the body, and ensuring that mobility is kept at a maximum, are of course vital to warfare. But this was something that only really became evident in the horrific conditions of the trenches. The sports coat favoured by the upper classes was an ideal solution. Once some military features were added it became a very useful garment.

By the end of World War I the image of gentlemanly soldiering had faded. The trench coat retained a hard, practical edge but became ruthless, a symbol of violent masculinity. This is true of gangster films in particular. A more sinister version of the citizen-combatant emerged. Glamourised in Hollywood film, they were then associated with spies, gangsters and foreign correspondents. Nazis also wore them, which might be why they were adopted as the uniform of the Trench Coat Mafia, who were responsible for an American High School massacre in the late 1990s. Trench coats are now a staple in the spring collections and the wardrobes of many.

World War I aligned the trench coat with the modern world. Ever since military clothing became part of the technology of survival in combat, it has gripped fashion consumers.

So when you next put yours on, remember its beginnings – in the wet, muddy trenches of World War I.

Jane Tynan does not work for, consult to, own shares in or receive funding from any company or organisation that would benefit from this article, and has no relevant affiliations. This article was originally published on The Conversation. Read the original article.