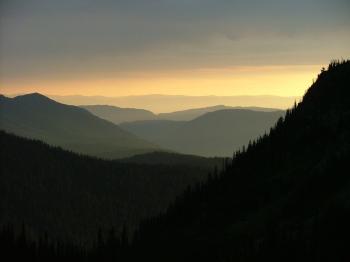 From the Mind’s Eye

BY Tim Gerbhart TIMEAugust 26, 2010 PRINT
The invention of the camera has led to questions about the purpose of painting: Why paint a picture of something realistic? Why not just take a photograph?

Victor Bakhtin, a wildlife painter, once described to me the work a photographer has to go to in order to get the right feel of a landscape. The light has to be just right. The photographer often revisits a place days on end, waiting for the right lighting.

It is a combination of technique and knowledge of the subject that gives photographers the ability to communicate through photographs.

Bakhtin used the metaphor of rolling a statue down a hill: What remains is the masterpiece. Too much distracting and erroneous detail gets in the way. With knowledge of what one is photographing, one will capture the right moment when everything comes together and there is nothing that isn’t needed in the photograph.

In photographing wildlife, photographers research their subjects intensively. In Yellowstone National Park, photographers line the roadside. Once, someone said wolves had been spotted in the early morning in a field leading up to the base of a large hill.

Dawn or dusk is usually when most mammals are active. Wolves are rarely active during the middle of the day, and they would not expose themselves so openly in front of dozens of people.

Bears are quiet by nature. They come and go, often making less noise than a mouse, but they are often portrayed as ferocious and obnoxious forest dwellers. I once tracked a mother bear and her cub through a recently cut forest. The mother was ending her nightly saunter, and the cub had diligently followed close by her side. The cub was learning the routines of the forest.

Such images of tenderness in the wilderness give a glimpse into a world few are familiar with or have the chance of seeing. A good wildlife photograph brings you into the world of the subject.

In the pioneering days of photography, Ansel Adams was able to transport people into the raw wilderness of the western Rockies through his photographs.

Adams tinkered with contrasts. He developed new techniques to give the photographer more control of the finished print. His first photograph of the Half Dome in Yosemite opened the possibilities and power of imagery—in his words, “an austere and blazing poetry of the real.”

To the photographer, it is more than the click of a button. A lot of skill and patience go into creating masterful photographs.