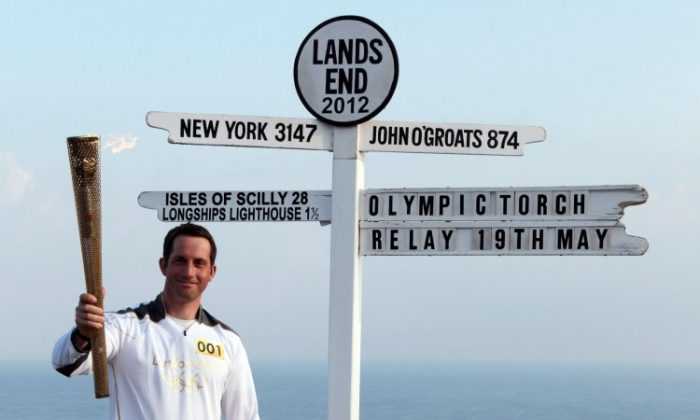 From Olympia to London, People Love the Burning Flame

The 2012 Olympic flame, flown into Cornwall from Athens on Friday, May 18, will travel 8,000 miles and be carried by a succession of 8,000 nominated torchbearers on its 70-day relay around the four nations of the UK.

Thousands of excited onlookers turned out to greet the iconic flame following its arrival by special British Airways flight into the Royal Naval Air Station at Culdrose, to mark the start of a journey that will end in London’s Olympic stadium on July 27th.

People came of their own accord to see the passage of the flame that had already travelled 2,000 miles around Greece after it was ignited in Athens on May 10, before being handed to Princess Anne on May 17.

The next day, Princess Anne, who flew from Greece with the flame, carried it in a lantern from the BA plane to David Beckham who, via a London torch, lit a cauldron on the tarmac to mark its historic arrival in Britain.

The 10-week journey that commenced at the globally recognised Land’s End sign post will pass through all kinds of terrain on myriad forms of transport before its climax at the games’ opening ceremony.

But why does the Olympic flame always fascinate people everywhere each time it starts its journey? The answer may be found in the historic symbolism of the conveyance of fire going way back and penetrating deep into a central theme of Greek legend. According to myth, the Titan god Prometheus stole fire from Zeus who had hidden it from Man. He gave it back to them, thereby bringing light to their darkness. Interestingly, the original relay race batons were actual torches symbolising the passing of fire from gods to man.

The myth epitomises the hope for an earthly civilisation that benefits mankind through human achievement in harmony with the elemental forces within nature. Maybe it’s not surprising that contemporary people, careworn by a crumbling global economy, the inadequacies of party politics, and the plethora of worries that can dog modern life, are ready to be uplifted by an atmosphere focusing on something more spiritual and idealistic.

Neither does it seem like a coincidence that church forums have organised a “prayer relay” to shadow the torch’s route at 70 overnight stop locations along its path.

Indeed there are instances from other recent torch relays that show that people will even use the event itself to stand up against the tide for something higher. One notable instance was the disruption to the Beijing Olympic torch relay, which was stopped, suppressing publicity for the objections of protesters.

Objectors were highlighting the hypocrisy of a government in apparent economic ascendancy over the rest of the world hosting the games while continuing to commit shocking human rights atrocities. This shamed the Chinese regime, who were seen by many to be contradicting the ethos of good-natured competition and humanistic fair play.

This general identification with idealism is further illustrated by people universally frowning upon the practice of using performance enhancing drugs that cheat others who have worked so hard to reach their physical peak naturally and according to agreed rules.

The modern public engagement in the Olympics and the fascination for the associated rituals can be traced back to the original games, which began to be held in ancient Greece in 776 BC and took place four-yearly for a thousand years. Warring cities in the region during those times stopped fighting just so that people could travel safely to the games, which celebrated beliefs in gods and acknowledged their fundamental connection to mankind.

These beliefs were not ideas but facts to people and so important that citizens obeyed the declaration of a temporary peace. While the games took place they observed a cessation of hostilities no matter what their earthly conflicts. In this there was recognition of a non-partisan and spiritual allegiance with connectedness to each other on a higher-than-worldly plane.

These ancient roots are echoed in the widespread concurrence of modern people with the ideas of tolerance and fair play that are the ethos of the modern Olympics.

The flame, lit by intensifying the rays of the sun focused onto a parabolic mirror at an ancient altar in Greece earlier this month reflects an enduring and elemental desire in people to cut out the hair splitting to-ings and fro-ings of modern politics and factional religions.

Fire, for the Greeks, epitomised the dawn of earthly civilisation. As the London Olympic flame travels Britain from the offshore islands of northern Scotland and down through the heart of the English countryside, our citizens will be reminded of the endless possibilities of human achievement to be nobly demonstrated through sport at the forthcoming Olympiad.