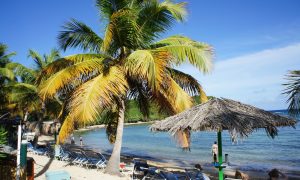 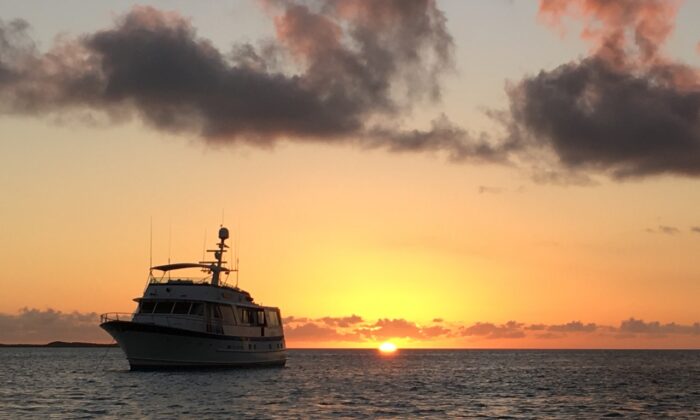 From Lawyer to Island Hopper: A Writer in Paradise

I know what you’re thinking. How did a seventh-generation attorney from Athens, Georgia, wind up writing fiction while kicking around the Caribbean on a boat? Like most things with me, it’s a long story, and there are twists and turns.

Let’s just say I set out looking for a perfect coral reef, and along the way, I found inspiration.

Twenty years ago, I left courtrooms and law offices behind in search of something else. I had been in practice for more than 22 years, during which time, I witnessed drastic changes in the legal field. It had become an advertising game, more of a business than a profession. I tallied up the perils and moral compromises and decided it was time to check out.

I made my exit by way of a 1987 Burger motor yacht Capricho on the high seas. My destination was a new way of life in places with beautiful names like the Virgin Islands, Bahamas, St. Croix, St. Kitts, and Grenada. I was struck by seeing people act out all their escapist desires, enjoying island food and drinks and soaking up the sun. No one was worried about what time it was or what was going on in the world they left behind. I wanted in on that. Now every day is an adventure.

In the Islands, Time Is Relative

While in the Virgin Islands, on any given day you can find me hanging out on Jost Van Dyke, waiting for a table at Corsairs, and discovering new music I’ll play over and over again. Or, there I’ll be, anchoring off a remote island where there are no houses, diving off the flybridge into the water at 8 a.m., and swimming to a nearby beach. I’ll take a walk and swim back to the boat an hour later. I might be sitting in a tire swing at an island bar, then get up and head to a high-end place like Oil Nut Bay, where I’m inspired by gazing on the amazing architecture that blends in with the environment to create what I maintain is the idyllic romantic vacation home. I let my imagination go wild.

I can make my own fun. Maybe there’s a backgammon tournament, with great food and music. I play bingo or hop over to another island for a picnic. There’s always the possibility of a crab race. Sometimes, I get invited to random weddings.

There’s so much to learn here! The Caribbean is a wonderful cultural mix of Indigenous, African, European, Indian, and Chinese elements, and each island has its own unique identity. In the Bahamas there is Junkanoo, a festival of African origin, with a magnificent parade, food, and lots of fun.

I love visiting Guadeloupe and the group of little islands called Les Saintes. There you go back in time where French and Creole cultures meet. There’s no marina. Everyone is on a boat anchored out in the harbor, and it makes you feel like you are in a tropical paradise with a French twist.

And then there’s Mustique, a private island in St. Vincent and the Grenadines. In Mustique you’re met with British colonial architecture and an eclectic mix of expatriates who live there all winter. You might see Tommy Hilfiger or Mick Jagger! Everyone just hangs out and there’s a blues festival where you’ll see a friend you met years earlier. In Mustique you realize it’s a small world, even when you’re way out in the middle of the ocean.

That Was Then, This Is Now

What it’s all about for me now is looking down and having my breath taken away by that perfect coral reef I mentioned earlier, just below me while I’m snorkeling. I see amazing fish and life all around me and my brain is ignited. I’m driven to investigate everything and learn more about how beautiful it is.

My life now is the exact opposite of my former role as an attorney, when I was always worrying about next steps. I started out working in my dad’s law firm when I was a kid, and for decades I gave the legal profession my all. I’ll tell you it’s a hard road to navigate, with lots of pitfalls. As for me, I took along some tricks of the trade and I use them to write novels, like my debut “Rascal on the Run,” instead of legal briefs. I am beholden only to the wind and the current.

Howard T. Scott began his law career working in his dad’s office at 13. He mastered the nuances of the courtroom scene on the job as a lawyer, first as a criminal defense attorney, and later in civil litigation, in his native Athens, Ga. Howard’s murder-suspense novel, “Rascal on the Run,” is the fictionalized tale of actual cases navigated by Howard and his father, the late attorney Guy Scott.