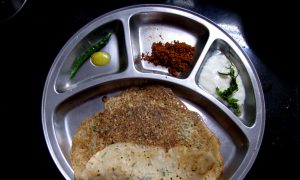 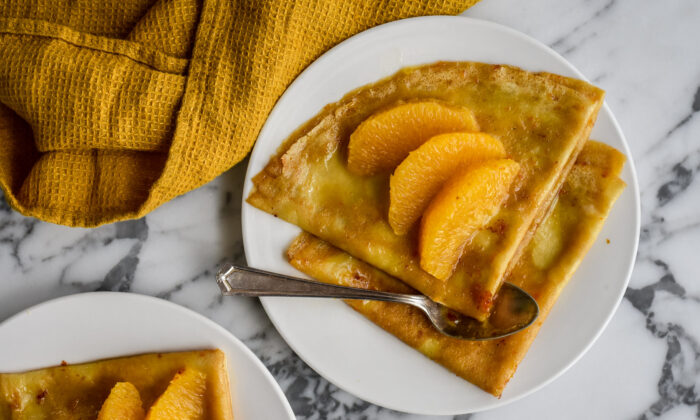 Crêpes Suzette, classically thin French crêpes drenched in an orange-butter sauce and flambéed tableside, is one of the most memorable French desserts.

The recipe can vary from one cook to another, but in essence consists of delicate crêpes in a beurre Suzette, a sauce of sugar, butter, and orange juice and zest. For the finishing touch, the sauce is flambéed with Grand Marnier, or sometimes triple sec or orange Curaçao liqueur, into a thick, caramelized syrup.

The good news is this elegant dessert is far easier to make than it may sound. In restaurants, the sauce is usually prepared—including the final flambé performance—in front of the guests, but it can just as well be done ahead of time in the comfort of your kitchen.

As with many popular French dishes, crêpes Suzette have a much-disputed origin, with different chefs claiming the invention of the recipe.

One of the most popular stories credits it to famed French chef Henri Charpentier in 1895, when he was a 14-year-old assistant waiter working in the kitchens of Monte Carlo’s Café de Paris. According to the story, the invention was a happy accident: He inadvertently flambéed a dessert of cognac-infused crêpes to be served to the Prince of Wales, the future King Edward VII of England.

“I thought I was ruined,” the chef wrote in his memoir, “Life a La Henri.”

“The Prince and his friends were waiting. How could I begin all over? I tasted it. It was, I thought, the most delicious melody of sweet flavors I had ever tasted. I still think so. That accident of the flame was precisely what was needed to bring all those various instruments into one harmony of taste.”

The prince loved the dessert so much (“he ate the pancakes with a fork; but he used a spoon to capture the remaining syrup,” according to Charpentier) that he encouraged Charpentier to keep the recipe, and named it after his dining guest, a French girl named Suzette.

Others claim this dessert was made in honor of actress Suzanne Reichenberg of the Comédie-Française, the French national theater, who was known by the nickname of “Suzette.” In 1897, Suzette appeared on stage as a maid serving flambéed crepes, prepared by Monsieur Joseph, the owner of Paris’ Le Marivaux restaurant.

In 1903, crêpes Suzette officially appeared in the first edition of chef Auguste Escoffier’s “Le Guide Culinaire,” a cookbook he developed while working at the Savoy, Ritz, and Carlton hotels starting from the late 1880s.

While the origin is still unclear, crêpes Suzette is today one of the most classic and beloved French desserts.

French crêpes have a reputation of being intimidating or finicky, as they are slightly trickier to make than American-style pancakes. But with practice—and some guidance—you will soon realize they are completely achievable.

The trick is to master the quick swirling motion necessary to cover the surface of the hot pan with a thin, even layer of batter. Don’t fret if this takes several tries—a French saying goes, “The first crêpe is for the dogs.” Because no matter how experienced you are in making crêpes, the first one almost never comes out right.

With that settled, here are a few more tips to master these delicate French wonders.

Don’t Skimp on the Milk Fat

Use whole or 2 percent milk. Avoid low-fat, skim, or lactose-free milk, or you will get flimsy, paper-like crêpes that will likely break when you try to fold them.

A common beginner’s mistake is to add the milk to the batter too quickly, or all at once. Even when using a whisk, you will likely have a hard time blending the milk in and end up with a lumpy batter.

Instead, pour the milk in small additions, whisking well between each one until the batter is homogeneous.

Don’t worry if your batter still ends up lumpy. Simply pass it through a fine-mesh strainer, and it will come out smooth. It’s crucial to have a lump-free batter before starting to cook the crêpes.

Mix the Butter Into the Batter

Whisking some melted butter into your batter will ensure it is blended evenly into the crêpes, and you won’t need as much butter to grease your pan for cooking. With the butter being incorporated into the crêpes themselves, rather than simply forming a film on their surface, your crêpes will have a less-greasy feel.

Refrigerate the batter for at least an hour, or ideally overnight. The flour in the batter needs time to fully absorb the liquids, which creates tender crêpes.

Make sure your pan is hot enough. Another French saying goes, “there are no crêpes without smoke,” meaning that your pan needs to be hot before pouring your batter on.

To make each crêpe, pour the batter into the middle of the pan while rolling your wrist in a circular motion, so the batter spreads evenly across the bottom. If your batter is too thick to swirl in an even layer, simply whisk in a few more tablespoons of milk to thin it out.

Don’t stress too much if there are little holes; you can patch them up with dots of additional batter.

To Prepare in Advance

If you’re making your crêpes in advance, prepare a plate covered with a clean dishcloth. Each time you finish cooking a crêpe, place it on the plate and cover it with the cloth. Pile your crêpes on the plate, and make sure the cloth is always wrapped around the plate, nice and tight, so the steam is trapped inside. This technique will make sure your crêpes are evenly cooked and stay very tender until ready to use.

You can make the crêpes up to 3 days ahead and keep them well-wrapped at room temperature before using.

For the Beurre Suzette

Prepare the batter: Sift together the flour, salt, and sugar into a large mixing bowl and dig a well in the middle.

Break the eggs into the well, all at once, and mix with a wooden spoon until incorporated. The batter will have the consistency of a thick paste.

In a separate bowl, mix together the melted butter, milk, and rum.

Slowly pour the milk mixture into the batter in small additions, mixing well between each addition; start by mixing with the wooden spoon, and switch to a whisk once the batter becomes loose enough. At the end, the batter should become a velvety smooth, lump-free liquid, with the consistency of heavy cream. If the batter is lumpy, pass it through a fine-mesh sieve.

Cover the bowl with plastic wrap and refrigerate for at least 1 hour or, ideally, overnight.

Cook the crepes: Heat a 12-inch nonstick pan over medium heat. Add about 1/2 tablespoon butter and swirl to coat the pan. When the pan is smoking hot and the butter is sizzling, add 1/3 cup of batter and swirl your pan quickly to completely cover the bottom. Cook until micro-bubbles form on top, and the underside of the crêpe is golden brown—this should take 2 to 3 minutes (if it takes longer, your pan is not hot enough). Carefully loosen the edge of the crêpe with a rubber spatula, and then with your fingertips, carefully peel off the crêpe and quickly flip it. Cook for an additional minute on the other side. Slide the crêpe out of the pan onto a plate and cover tightly with a clean dishcloth.

Repeat with the remaining batter, piling each finished crêpe onto the plate and covering with the dishcloth. You can re-grease your pan with another 1/2 tablespoon of butter halfway through, before making the 6th crêpe.

Make the beurre Suzette: Heat a 12-inch nonstick pan over medium heat. Add the sugar and orange zest, and let it cook without touching until the sugar melts and turns to a clear syrup; do not let it caramelize. Carefully add the orange juice and butter; the liquid will bubble and the sugar will crystalize. Stir continuously until the butter melts and the sugar turns liquid again.

Place one crêpe in the pan and let it soak up some of the sauce. Fold it in half and then in half again, so it forms a triangle. Repeat with three additional crêpes.

To flambé the crêpes: Right before serving, pour 1/3 cup of Grand Marnier onto the crêpes and turn the heat to medium-high. Bring the liquid to a light boil, 1 to 2 minutes. Remove the pan from the burner and set it on a heat-proof surface. Immediately, using a long match or barbecue lighter and carefully approaching from the edge of the pan—not the middle—hold a flame within 1 inch of the liquid, until it lights on fire. The flame will last 5 to 10 seconds and die when all the alcohol has burned off.

Serve the crêpes immediately, topped with orange supremes and (optional) a scoop of vanilla ice cream.

Audrey Le Goff is a French food writer, photographer, and creator of the food blog, “Pardon Your French,” where she shares recipes and stories from her beloved home country, France. She is the author of the cookbook “Rustic French Cooking Made Easy” (2019). She currently lives in Niagara, Canada. Follow her on Instagram @pardonyourfrench