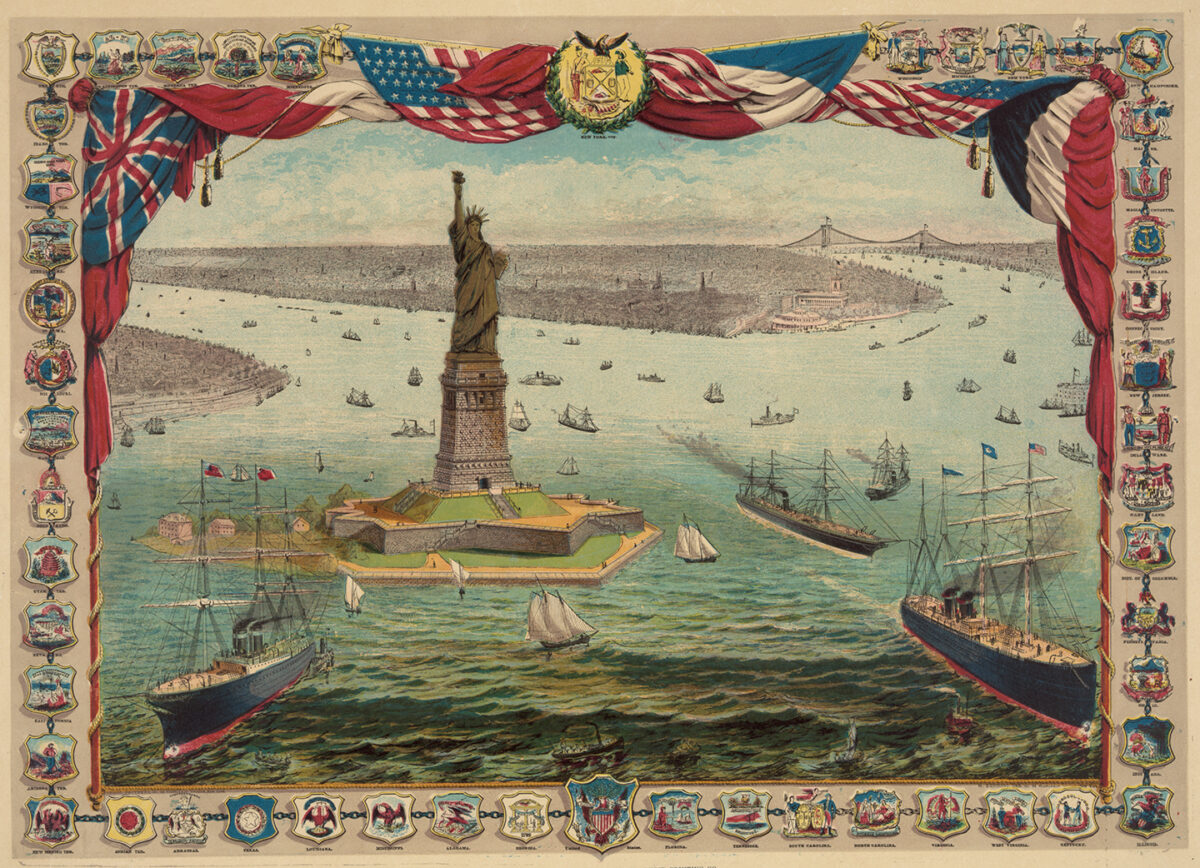 "The gift of France to the American people, the Bartholdi colossal statue, Liberty Enlightening the World," 1884. Library of Congress. (Public Domain)
History

“My only ambition has been to engrave my name at the feet of great men and in the service of grand ideas,” wrote Frédéric Auguste Bartholdi.

Today, Frédéric Auguste Bartholdi is most known for one colossal sculptural work that he called “La Liberté Éclairant le Monde.” We know it as the Statue of Liberty. The 151-foot-tall bronze neoclassical statue has stood on its pedestal overlooking New York’s harbor since 1886. The huge statue, a representation of the Roman goddess Libertas, is supported by an iron framework built by Gustave Eiffel, who is most noted for his famous tower in Paris.

While he was designing the Statue of Liberty, Bartholdi visited New York Harbor in 1871 and noted that Bedloe’s Island commanded a prominent position. He would place the statue atop star-shaped Fort Wood, built in 1806 and named much later for a hero of the War of 1812. Rising from the center of the 11-pointed star, a pedestal designed by architect Richard Morris Hunt supports the statue. In 1846, Hunt studied at the École des Beaux-Arts in Paris—the finest school of architecture in the world—where he learned the academic architectural style referred to as beaux-arts. Popular during the middle to late 19th century, the beaux-arts style drew upon the principles and aesthetics of French neoclassicism while incorporating elements from the architecture of the Renaissance and Baroque period. Hunt introduced the beaux-arts architecture to America, designing mansions for families like the Vanderbilts and many public buildings.

It was on the 1871 trip to America that Bartholdi met Hunt in Newport, Rhode Island. He also met Frederick Law Olmsted in New York. Olmsted, the American landscape architect, was currently proposing a design for a fountain in a Central Park project, which would be the first of many commissioned urban park designs in America. Bartholdi was even introduced to President Ulysses S. Grant. Fascinated with the American way of life, he embarked on a journey by rail across the country. He visited Niagara Falls, continued on to Detroit, and arrived in Chicago in August of that year. He was impressed with the robust growth evident in that city—calling it “most American.” It was there that Bartholdi gazed upon the original copy of the “Emancipation Proclamation,” which had been given by Abraham Lincoln to the Chicago History Museum. He returned to France, eager to begin work on his American colossus.

The idea for the statue was first put forth by Édouard de Laboulaye, a French historian. Both Laboulaye and Bartholdi were members of the Union Franco-Americaine, a group dedicated to the ideals of independence and liberty that both republics shared. As the centennial of the American Revolution approached, Laboulaye suggested presenting the United States with a gift commemorating the alliance of France and the United States in the War of Independence. Bartholdi presented his drawings of a colossal lady whose upheld torch would serve as a lighthouse. There are accounts that say that Bartholdi modeled the statue after his mother, Charlotte. He said as much to French Senator Jules Bozerian.

It would be a gift from the people of France. It was not funded by the government, but by private donations. The French people would eventually raise more than 1,000,000 francs, but the Americans would have to fund the building of a suitable base, which took many years. By the time of the American Centennial, only the hand and torch had been constructed. Bartholdi and the torch traveled to the Centennial International Exhibition—the first World’s Fair to be held in the United States—in Philadelphia’s Fairmount Park, 1876. Richard Morris Hunt had designed the main exhibition building where it was shown.

At the 1878 Exposition Universelle in Paris, Bartholdi exhibited the torch and the head as well. Still, funding was slow coming in, especially by the Americans for the base. But in 1883, self-made newspaper publisher Joseph Pulitzer would take up the cause. He took a dig at the Gilded Age millionaires, saying that “each of them has the means to make a check to pay the full amount required without having the impression of having spent a dollar.” Pulitzer thus chided the rich and won the common man to the cause. More than 10 years after the centennial, the crated statue was finally delivered to Bedloe’s Island, assembled, and dedicated. Barholdi traveled to New York for the ceremony in 1886.

American poet Emma Lazarus was inspired by Bartholdi’s great sculpture to write “The New Colossus” in 1883. The poem was written as part of an art and literature auction to raise money for the pedestal construction. In 1903, her words were cast on a bronze plaque that was installed at the base of the statue:

‘Keep, ancient lands, your storied pomp!’ Cries she
With silent lips. ‘Give me your tired, your poor,
Your huddled masses yearning to breath free,
The wretched refuse of your teeming shore.
Send these, the homeless, tempest-tost to me,
I lift my lamp beside the golden door!

The Commemoration of Liberty on Two Shores

When Bartholdi made his final trip to America in 1893, his name had become a household word. He took passage to America on the French steamer La Champagne. Forty-seven members of the French Society of Engineers were on board. As the ship made its way into the harbor, they cheered in unison. Bartholdi, thinking that the statue was not quite visible enough since the copper had darkened, entertained the notion of covering it with gold. Unwittingly he stepped into an American financial argument, the gold versus silver standard, as the country struggled through a depression. The newspapers had a field day with it. The statue was never gilded, eventually weathering to the familiar green copper color.

Bartholdi, the sculptor, had another vision. He wanted to build “a kind of Pantheon for the glories of American Independence.” He wanted to surround the Statue of Liberty with a whole host of American notables, beginning with sculptures he had created of Washington and Lafayette at the behest of Joseph Pulitzer. These sculptures were not as large as Liberty, but closer to life-sized representations, and were exhibited at the World’s Columbian Exposition (also known as the Chicago World’s Fair) in 1893.

But the reception of these works was tepid. The New York Times presented a less than complimentary critique of the work, suggesting that the figure of Washington should have been bigger, since he was “a man of exceptional height.” With little enthusiasm being shown for the statue in America, Pulitzer gave the sculpture to the city of Paris. It was installed in the Place des États-Unis (United States Square) on Dec. 1, 1895. In attendance was a representative of Lafayette’s family, as well as other important people.

On April 19, 1900, Charles Baltzell Rouss presented the city of New York with a replica casting of Washington and Lafayette. Though there would be no “American Pantheon,” Bartholdi created on a smaller scale, on two shores, a commemoration of something grand. He celebrated the deep friendship of these two patriots whose love of liberty gave us our country.