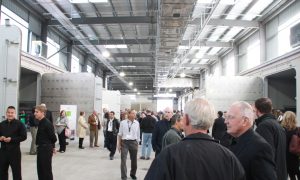 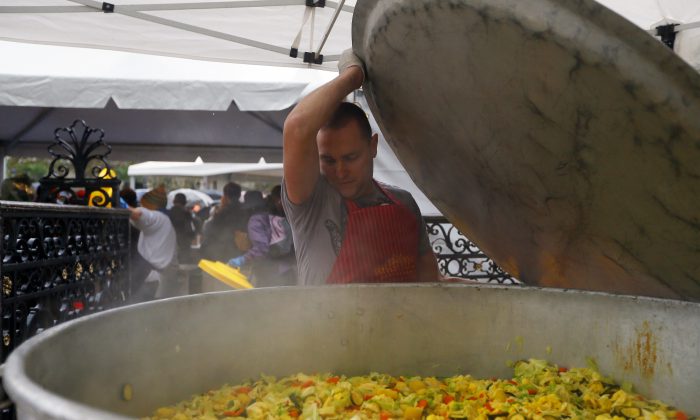 A man cooks vegetables during an event to raise awareness of the food waste on October 13, 2012 at the Place de l'Hotel de Ville in Paris. (Kenzo Tribouillard/AFP/GettyImages)
Environment

In an effort to reduce food waste, the French government passed a bill last week that will require all supermarkets to donate their unsold—but still edible—food to charities or to be used as animal feed.

Supermarkets that throw away or destroy their food will face fines of up to 75,000 euros (about $82,300) or two years in jail, according to a report by the Guardian.

The French government estimates that the average person in France throws out 20 to 30 kilograms (44 to 66 pounds) of food per year, totaling about 15.6 billion pounds. That costs the country about 20 billion euros ($21.9 billion) annually. The recent bill was part of an initiative to cut France’s food waste in half by 2025.

In the United States, the food waste problem is even worse. A 2010 assessment by the U.S. Department of Agriculture estimated that Americans waste 133 billion pounds every year (that’s about 430 pounds per person), equivalent to wasting roughly 30 percent of the total available food supply at the retail and consumer levels. The total cost was $161.6 billion.

We don’t have a federal law that bans supermarkets from throwing away their food, but a number of supermarket chains—for example, Wal-Mart, Whole Foods Market, Wegmans, and Trader Joe’s—partner with local charities to donate food products that are cosmetically blemished or past their “sell by” dates.

In France, some supermarkets were wary that people who scavenged for discarded food in their dumpsters would get food poisoning after consuming the food. They frequently doused the food with bleach to deter people from eating it, according to the Guardian.

In the United States, a 1996 bill—called the Bill Emerson Good Samaritan Food Donation Act—was passed to protect against this exact fear: the bill said grocery stores and charity organizations were not liable if a consumer were to get sick from eating donated food. The condition was that stores and charities acted in good faith and did not intentionally try to harm others.

The bill was created to encourage companies and organizations to donate edible food that would otherwise go to waste.

In France, instead of protecting against potential legal trouble, the country decided to mandate that all companies directly contract with charities to donate their unsold food.

The law will ensure that supermarkets are not deliberately spoiling their unsold food so that it cannot be donated, according to the Guardian.

Which way will be more effective at getting supermarkets to reduce their waste? It remains to be seen as France puts the law into place.

American supermarkets said they donate millions of pounds of food each year. Some food recovery organizations in the country also collect edible food deemed unsellable during other stages of the supply chain, such as at produce farms and at food packaging companies, according to a 2012 study on food waste by the environmental nonprofit Natural Resources Defense Council.

But the Council estimated that in all, only about 10 percent of all the available, edible wasted food is recovered each year. They cited several reasons for the small percentage, including lack of awareness among food companies about the Good Samaritan Food Donation Act, and company fears about negative publicity should their donated food cause a food-borne illness.