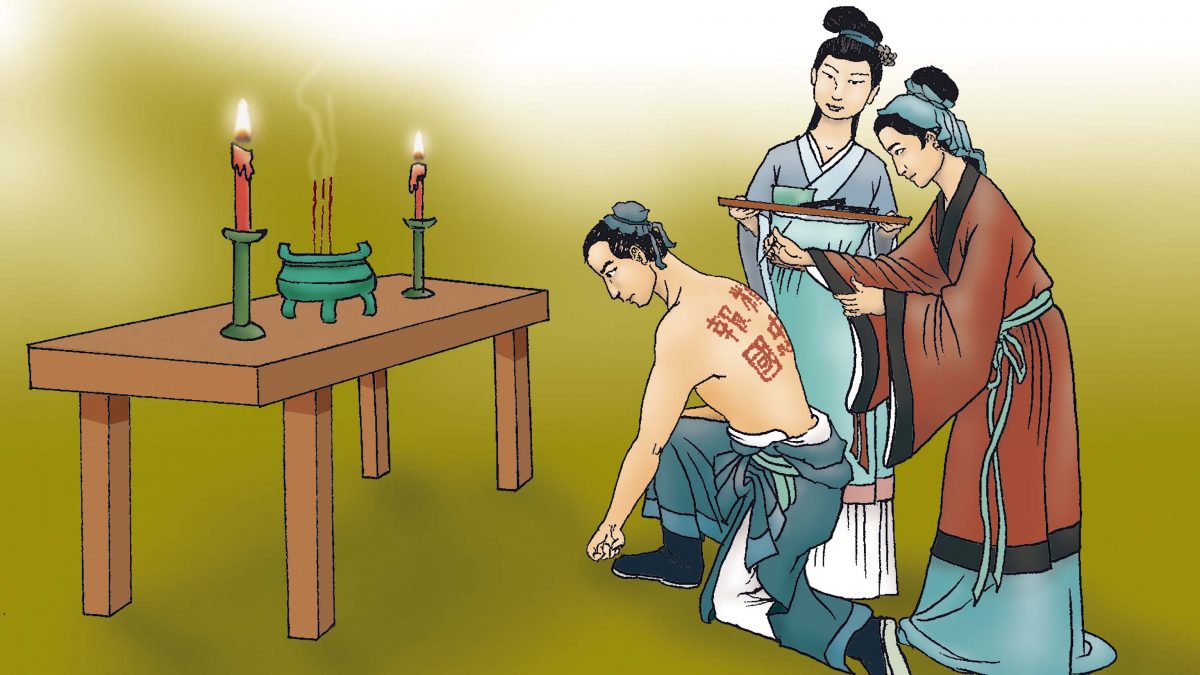 Our mothers have great influence on us. As our first teachers, they influence us in every way, shaping our personalities and moulding our minds.

There were many prominent figures in Chinese history whose mothers played a significant role in their achievements. Among these mothers were Mencius’s mother, Yue Fei’s mother, Tao Kan’s mother, and Ouyang Xiu’s mother. Revered as the Four Virtuous Mothers of Ancient China, their behavior and character were exemplary.

Mencius’s mother, Zhang, was born in the State of Zou during the Warring States Period (475–221 B.C.). As a widow, she worked hard to raise Mencius (372–289 B.C.) and was very strict with him. That was how Mencius grew up to be a famous philosopher.

The story of Zhang changing her residence three times for Mencius is known by many. The mother and son used to live near a cemetery. Mencius mimicked the crying of the people at the funerals. Zhang was concerned and decided to move.

Their new home was next to a marketplace. Mencius, who was good at mimicry, started imitating the touting and shouting of the hawkers and butchers. Believing the environment was a bad influence on Mencius, Zhang moved again, this time to a home next to an imperial ancestral temple.

Mencius started picking up court etiquette from the officials who came and went on the first day of every month. Zhang was very pleased and decided that it was a good place to settle down.

One day, Zhang was weaving on looms when Mencius came back from school. She asked him, “How far did you get in your studies today?”

Mencius answered, “About the same as usual.”

Zhang immediately grabbed a pair of scissors and cut the piece of fabric she was weaving in two. Shocked, Mencius asked her why she did that.

Zhang answered: “Neglecting your studies is akin to cutting the fabric I was weaving. A person studies to establish a reputation and gain knowledge. With knowledge, he can have peace and happiness at home and stay away from trouble when he is away from home. If you neglect your studies, you will not be able to avoid a life of menial service, and you will lack the means to stay away from trouble. It is like weaving for a living. If I gave up halfway, how would I be able to feed our family?”

She believed that a woman who abandons her livelihood, as well as a man who neglects cultivating his virtue, will be reduced to slaves, if not thieves or burglars.

Zhang’s admonitions changed Mencius. He studied hard under the guidance of Confucius’s grandson, Zisi, and eventually became a famous scholar.

Madam Yao was the mother of Yue Fei (1103–1142), the famous military general who led forces in fighting against the Jurchens during the Southern Song Dynasty (1127–1279).

She was renowned for tattooing four Chinese characters on Yue Fei’s back—jing zhong bao guo (serve the country loyally)—to remind him of his duty. In the last few years of her life, she followed Yue Fei and his troops around. She passed away in Ezhou in 1136.

It was Yang Yao who prompted Yue Fei’s mother to tattoo his back. Yang Yao, who was a rebel, admired Yue Fei for his literary and military talent. He sent someone named Wang Zuo to invite Yue Fei to join his army. Wang Zuo offered Yue Fei many treasures.

Yue Fei turned him down flat, saying, “I will never betray my country!”

Wang Zuo had no choice but to leave with the gifts.

Madam Yao said to her son: “I am really pleased to know that you have chosen to stick to your principles. But I fear that after my death, some malicious people might come and lure you into committing dishonourable deeds again. If you, in a moment of folly, do something that betrays the country, your name will be tarnished. Therefore, I am going to tattoo four characters on your back—jing zhong bao guo—to remind you of your duty. Be a loyal subject and serve the country with the utmost loyalty, and I will rest in peace when I pass on.”

Yue Fei agreed to his mother’s suggestion. His mother wrote “jing zhong bao guo” with an ink brush on his back and used a needle to pierce the words into his skin.

Yue Fei eventually became a famous general respected by all.

Tao Kan’s mother, Zhan, was a symbol of exemplary motherhood in ancient China. She was known for her good parenting skills and great magnanimity. Tao Kan (259–334), a great governor and general during the Jin Dynasty (265–420), was born into a poor family and was the only child. His mother weaved to raise him and give him an education.

It was snowing heavily one day, and Tao Kan’s friend Fan Kui dropped by. Fan Kui was a scholar from Poyang and had been recommended by the local authorities of his hometown to be a civil officer for being filial and incorruptible. He was on his way to Luoyang to fill his appointment.

Tao Kan was concerned about playing host to him and his men and horses, as the family was too poor to afford any decent fare. His mother comforted him and said she would figure out a way.

She cut off her long hair, sold it, and used the money to buy rice. She also cut into the pillars of an old shed to make firewood and shredded a straw mat to feed to the guests’ horses. When Fan Kui found out, he exclaimed, “Only a mother like that can raise someone like Tao Kan!”

Tao Kan never forgot that his mother had gone the extra mile to play host to Fan Kui and his entourage. When Tao Kan became an official, he was modest and courteous, and he always received his guests with great hospitality.

When Tao Kan served as an official in charge of fisheries in Haiyang, Zhejiang Province, he often received gifts from his subordinates. One day, someone gave a jar of salted fish to him. Tao Kan had it delivered to his mother back in his hometown.

However, his mother returned the jar of salted fish with a letter stating: “You are an official now. Sending me something that is your office property does not make me happy. In fact, it worries me.”

Alarmed and ashamed of himself, Tao Kan became an incorruptible official from then on.

Tao Kan was learned and upright. From the position of governor, he was promoted to become a military commander before he was finally appointed as Duke Huan of Changsha. His achievements as a scholar and an official were exemplary, and credit went to his mother.

Ouyang Xiu (1007–1072) was a great scholar of the Northern Song Dynasty (960–1127). His mother, Zheng, was a diligent woman with a lot of determination and knowledge. She became a widow when Ouyang Xiu was 4 and reared him singlehandedly. His father had held a position among the local authorities, but life became hard after his death.

When Ouyang Xiu was 5 years old, his mother taught him to read and write and how to be a good person. They were too poor to afford paper and ink, so Zheng improvised by using a reed to teach Ouyang Xiu to write on sand.

Zheng also used Ouyang Xiu’s father as an example to teach Ouyang Xiu to be incorruptible. When Ouyang Xiu became an official, Zheng told him stories of his father’s integrity and good deeds.

“As an official, your father often worked late into the night,” she recounted. “He paid exceptional attention to cases involving commoners, and he would review those cases in great detail to prevent unjust sentences from being passed. Where possible, he would lighten the sentence. As for those sentences that he could not lighten, he would often sigh in regret.”

She added: “Your father was very upright, and he refused to take bribes. He frequently gave money to charity, and although he did not earn much, he kept little for himself, as he did not want his wealth to become a burden. As such, after he died, he left behind no house or land.”

When Ouyang Xiu was demoted for supporting Fan Zhongyan in a reform, his mother did not blame him. Instead she comforted him.

“It is not a disgrace that you were demoted for supporting justice. Poverty is nothing new to us. I am happy so long as you are not disheartened by what happened,” she said.