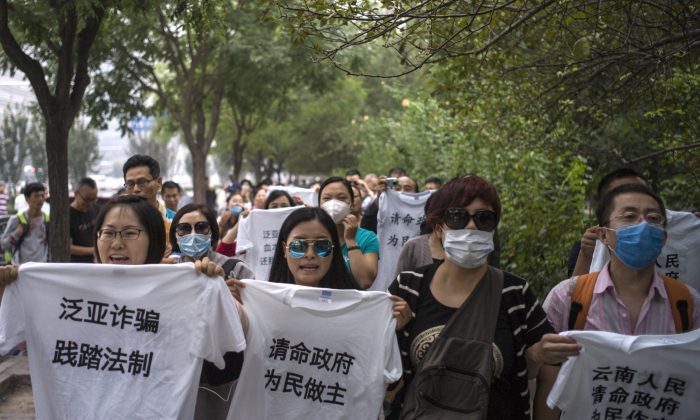 People protest outside the office of China's top anti-graft agency complaining they were tricked by Fanya Metals Exchange. Chinese investors who claim to have lost money on risky investments mounted a rare protest in Beijing on Sept. 22, 2015. (Fred Dufour/AFP/Getty Images)
China Business & Economy

The Kunming Intermediate People’s Court sentenced Shan Jiuliang, who founded and ran the minor metals bourse, to 18 years in prison for crimes including embezzlement, according to a Xinhua report carried on the court’s website.

Shan, whose company was said to have caused investors “huge economic losses,” was also fined 500,000 yuan and had 50 million yuan of his personal property confiscated, the report added.

Fanya was launched in 2011 in Kunming, in southwest China’s Yunnan Province, with the aim of raising the prices of minor metals like bismuth by building up stockpiles using money borrowed from thousands of individual investors.

But the exchange froze transactions and members’ accounts in 2015 after experiencing “liquidity” problems and was later taken over by government investigators.

The same Kunming court had in January attempted to raise funds to pay off investors owed nearly 40 billion yuan by auctioning off the bourse’s inventories of indium, a silvery metal used in flat-panel screens and semi-conductors, on Chinese e-commerce platform Taobao.

The sale ultimately attracted no bids.

Asked on Friday if the court’s decision was good news, one former Fanya investor said it had fallen short of the investors’ expectations. “Where is the money? The key question is not addressed in the sentence,” he said.

Besides Shan, 20 other defendants are facing criminal charges for Fanya-related crimes, Xinhua said. These include Yang Guohong, the former vice president of the exchange, who is accused of illegally appropriating property by abusing his position.

Reuters was not immediately able to reach Shan, Yang or their representatives for comment.