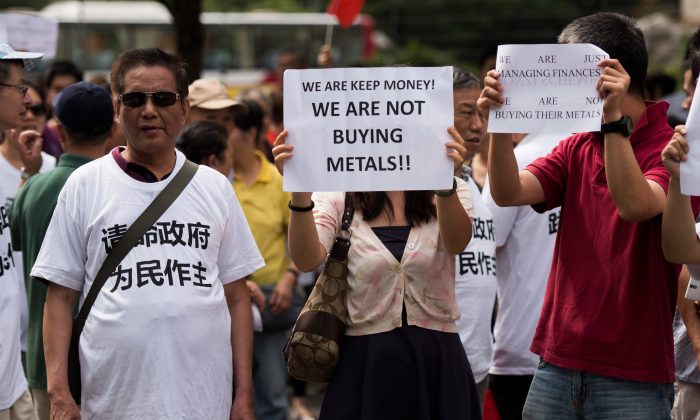 Protesters against the Fanya metals exchange hold placards outside the office of the China Insurance Regulatory Commission in Shanghai on Sept. 25. (Johannes Eisele/AFP/Getty Images)
China

The Fanya Metal Exchange can't, or won't, give investors their money—and they're likely not the only ones
By Fan Yu

The protests elicited nary a response from the China Securities Regulatory Commission (CSRC), and protesters were dispersed by police several hours later.

Such protests could soon become commonplace. There is increasing discontent among Chinese investors with alternative and speculative asset exposure, who have little hope for government intervention unlike those invested in public stock markets.

The target of the protesters’ ire is Fanya Metal Exchange, an exchange of minor and rare earth metals in the southwestern city of Kunming, Yunnan Province. The exchange is authorized and regulated by the local government, and deals in 14 rare nonferrous metals including indium, bismuth, antimony, and terbium.

The exchange claims it allows investors to lend to metals traders using the metals as collateral—the same metals the traders are paying Fanya to store as a custodian. In theory, this works for most commodities and metals that are frequently traded.

But one look at Fanya’s business model raises obvious questions.

The metals Fanya deals are rarely produced and used. Indium is a byproduct of zinc ore, and is used in small quantities in the production of LCD screens. Fanya stores more than 3,400 (3,740 tons) metric tons of indium, which is more than the amount of indium needed globally for several years combined.

It’s also hard to fathom who would hire Fanya to store such high amounts of minor metals, let alone pay the exchange enough to cover 13.7 percent interest plus spread. At such quantities, Fanya doesn’t have a market for indium and its inventory (and investors’ collateral) is completely illiquid. Even assuming its revenues are legitimate, any sizable withdrawal request would instantly trigger a liquidity crisis.

The only logical way for Fanya to pay its interest rate and guarantee investor principal is to use money from new investors to pay off existing ones—effectively a Ponzi scheme.

Some protesters last week said they racked up bank loans and credit card debt to purchase more than 1 million yuan worth of “ri jin bao” from Fanya.

What drove hundreds of thousands of investors to sink their life savings into products linked to obscure metals?

The answer lies in the Chinese Communist Party’s debt-fueled economy over the last decade. It set savings rates artificially low and barred individuals from investing outside of China, all of which steered people into buying real estate, infrastructure debt, and the domestic stock market.

As those markets became saturated and valuations ballooned, investors began betting on increasingly obscure and risky asset classes such as derivatives of minor earth metals.

Unfortunately for investors, exchanges such as Fanya sit in a regulatory black hole.

While the CSRC has been officially mum, various local Chinese publications quoted anonymous sources within the CSRC stating that the agency doesn’t quite have jurisdiction over Fanya, which is licensed regionally.

“Spot markets come under the ambit of the Ministry of Commerce while securities and futures markets are under the CSRC. These so-called spot-trading exchanges are structuring contracts and complicated financial products based on commodity spot prices, creating a regulatory uncertainty,” securities lawyer Geng Shuang told the South China Morning Post in Hong Kong.

“As a result, neither the ministry nor the CSRC minds them at present.”

Local governments aiding and abetting such operations complicate the matter further. Firms such as Fanya provide taxes and drive up GDP figures for the local economy, which is a boon to local Party officials. “Fanya didn’t pass the latest CSRC inspection but has continued to operate because of the local government’s support,” a CSRC official admitted to the Post.

Liu Guangxi, director of Yunnan Province’s finance office, was effusive in his praise of the company. “According to statistics of relevant governmental departments, Fanya paid direct taxes 360 million yuan, indirect taxes 670 million yuan, [which] totaled nearly 1.1 billion yuan to the country,” he said at a function on July 9 according to the company’s website. “We will support Fanya as always.”

Without assistance from authorities, some investors took matters into their own hands. On Aug. 22, Fanya investors organized via social media and gathered in Shanghai to confront and apprehend Fanya founder Shan Jiuliang. Shan was abducted as he exited a hotel and was delivered to a local police station and later released.

China Financial Derivatives Investment Research Institute estimates there are around 400 similar exchanges around the country, with 1 trillion yuan ($157 billion) in total assets. Those figures suggest there’s potential for more financial and social upheaval ahead.

When similar incidents occur with greater frequency around the country, the Ministry of Commerce and CSRC may need to start minding.