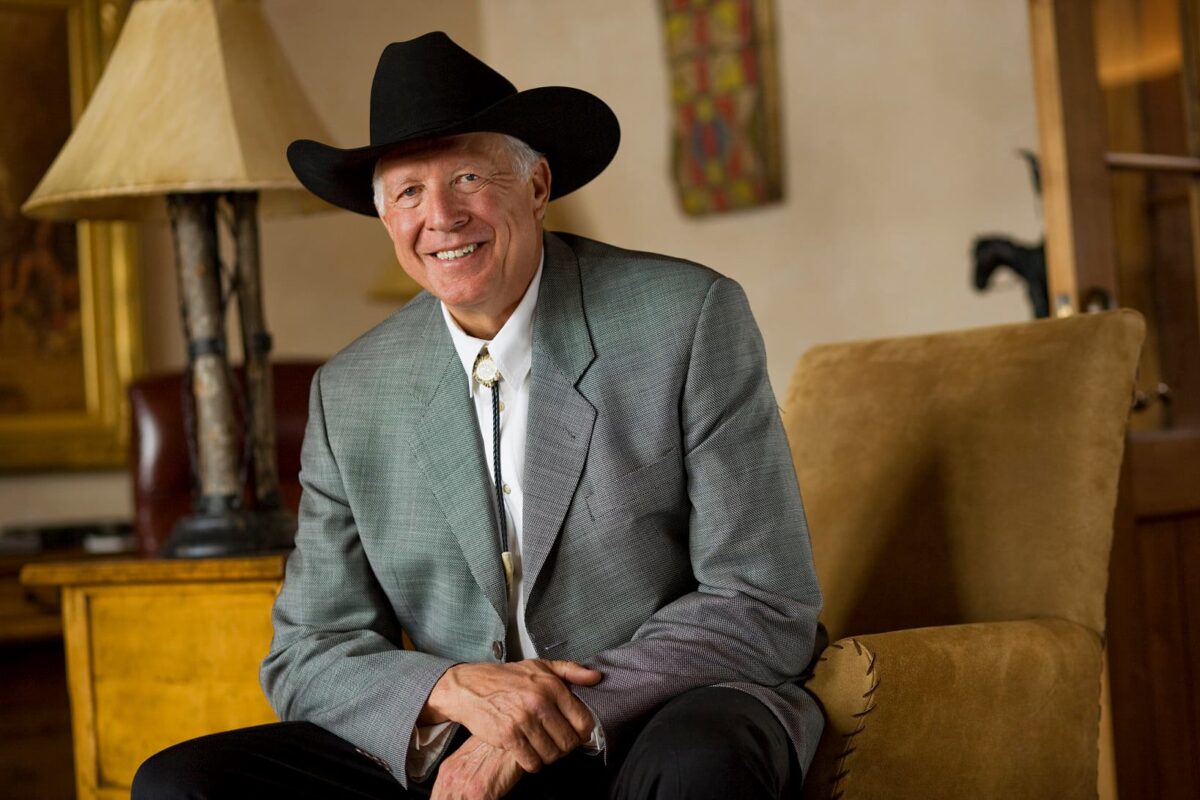 Foster Friess: A Generous Man Whose Heart Was in the American West

Wyoming businessman Foster Friess was well-known for his innovative approach to philanthropy.

He built a life that embodied the American Dream. He started his investment business with a few hundred dollars, made a fortune, and donated a large portion of it during his lifetime.

He was fascinated by cowboys and the American West. When he moved to Jackson Hole, Wyoming, in 1992, he took on a Western look. He usually donned a cowboy hat in public, which made him stand out wherever he went.

Foster had a reputation for being a very kind, humble, and generous person. To him, philanthropy was not just about writing big checks to charities. He inspired others and served as a good role model for giving.

From the beginning of his career as an entrepreneur until the day he died at the age of 81 last year, he devoted a lot of his time and energy to helping others.

Foster, a born-again Christian, believed that “we are merely stewards, not owners, of what God has given to us.”

When people criticized him for being too generous, Foster would respond, “It’s the Lord’s money, and if it were mine, they wouldn’t be getting a dead red cent.”

“That has been our philosophy ever since we really started giving,” Lynn Friess, his wife of 58 years, told The Epoch Times.

Over the years, the couple devoted more than $500 million to charitable causes.

Lynn is now carrying on the work she and Foster started many years ago. In an interview at Foster’s office in a two-story log building in Jackson, Lynn reflected on their early days in the business and how they nurtured a lifelong passion for giving.

Foster grew up in Rice Lake, a small town in northern Wisconsin. He was a first-generation college graduate. He received a degree in business administration from the University of Wisconsin, where he met Lynn, who was from farming country in upstate New York.

Both Lynn and Foster came from humble beginnings. They founded their investment management company, Friess Associates, with just $800 in 1974.

Success was slow in the beginning, according to Lynn. “It was a lot of work.”

She recalls Foster’s first office space, a long rectangular room with just a glass door and no window in Wilmington, Delaware.

Foster came home one day with the good news that they had got their first million-dollar account, which was a turning point in their life.

“That’s the way it started. And everything was truly by word of mouth. He did no advertising whatsoever. And he loved stocks. He was obsessed with stocks,” Lynn said.

Foster quickly became a successful growth-stock picker. He was dubbed one of the “century’s great investors” for his high-performing Brandywine Fund. And Forbes magazine listed him among the top 10 money managers of his generation, alongside Warren Buffet, Peter Lynch, and John Templeton.

Foster had a unique approach to investing. He was constantly on the lookout for firms that were innovative and had a proven track record of profit growth.

He would only put money into individual stocks. And he cared more about the business than how the price of a stock moved.

“We try to think of ourselves as businessmen buying businesses,” he said in an interview with author Peter J. Tanous for his 1997 book “Investment Gurus.”

As part of his investment strategy, he also had a disciplined approach to selling stocks, which he called “pigs-in-a-trough” theory. In this way, he avoided the risk of falling in love with the companies in which he invested, a common problem for many stock investors.

“Remember, I grew up on a farm in Wisconsin. If you watch the pigs, you will notice that when a pig approaches a group at the feeding trough, it has to shove aside a weaker or less hungry one to get in,” he explained in another interview in 1999. “The same survival of the fittest philosophy holds true for the stronger stocks that replace the weaker ones.”

In this way, he would usually sell a stock when he wanted to buy a better one. This strategy allowed him to “have the most dynamic companies in the portfolio” and generate substantial returns.

Foster often said that managing billions of dollars was not a one-man-job, and that he depended greatly on his staff. He believed he had a God-given gift for choosing the right people.

“There was a philosophy of the firm: It was God first, then family, and then work,” Lynn added.

He moved his business and family to Jackson in 1992. And in 2001, he sold a majority stake in the company to devote more time to philanthropic work.

Foster’s success in business allowed him to support many charities, causes, and political candidates who shared his values.

He was often among the first philanthropists to respond to natural disasters and his efforts spanned the globe. He and Lynn supported the relief efforts in the aftermath of Hurricane Katrina, the Sri Lanka tsunami, and the Haitian earthquake.

Foster traveled to the disaster areas on numerous occasions to help victims and identify the best relief efforts. He also sponsored matching grant programs to encourage others to contribute.

From assisting families with disabled children in Wyoming to supporting Christians fighting on the front lines against ISIS, Foster and Lynn engaged in a wide range of humanitarian activities.

Foster was also well-known for his memorable birthday parties. On his 70th birthday, he requested that each guest choose their favorite charity. Lynn and Foster donated $70,000 to each of the nominated organizations, contributing a total of nearly $7.7 million.

He also surprised 400 close friends with a $100,000 check at Christmas in 2020 and asked them to donate the money to a charity of their choice.

Foster, according to Lynn, was an unusual person who touched the lives of countless people in many ways.

After he passed away, Lynn said she received a heartfelt letter from a young man, in which he expressed his gratitude for Foster’s influence on his life.

This young man crossed paths with Foster in Pine Valley, which is regarded the Mecca of golf in the United States, according to Lynn.

Foster’s caddy was this “young man, who, during the course of a weekend, told him that he had just finished at Pennsylvania College his first year, but his father and mother had sat him down and said there’s no money for the next year,” Lynn said.

Foster, touched by this young man’s story, offered to pay his college expense. He did, however, invite him to a challenge for the payback. According to Lynn, he told the young man: “All I ask you is to read a paragraph in the Bible a day. That’s it.”

And he agreed. He finished his studies and later found a job. In the letter he wrote to Lynn, he told that he kept up his daily Bible study routine thanks to Foster.

Despite never having met him, his parents also penned “beautiful tributes” to Foster, Lynn said, because of what he had done for their son.

Foster was well-known for his unwavering optimism and ability to lift people up.

“That’s the way he was,” Lynn added. “He was amazing. Bigger than life.”

Passion For the American West

Foster and Lynn fell in love with the American West, its people, architecture, and wildlife after moving to Wyoming.

“I remember one time getting stuck on a road out in the park in Grand Teton National Park. And it was during the elk bugling time,” Lynn recalled.

Everyone rolled down their windows to “listen to the harmonies of the various elk calling,” she said. “It was a memory I’ll never forget.”

She believes that the cowboy codes of the West represent virtues that all Americans can embrace today. Those codes were centered on kindness, fair play, loyalty, and respect for the land.

“Foster had done things on handshakes. You probably would not see that on the East Coast. And the people here are warm. They’re not pretentious,” Lynn said.

Foster, who was a major donor for Republican candidates and causes, ran for governor in Wyoming in 2018. He invested in The Daily Caller, a website founded by television host and political commentator Tucker Carlson. He also backed the conservative youth group Turning Point USA.

In 2018, Foster founded “Foster’s Outriders,” an organization with the mission to “help keep America on the right path,” similar to the role of outriders in keeping the herd on the trail.

Initially, the organization was involved in a variety of political activities, according to Lynn. It now operates as a charitable organization, primarily providing scholarships to those wishing to attend trade schools.

It’s been more than a year since Foster, “the original outrider,” passed away, yet his philanthropic legacy continues to serve as an inspiration for his family and friends.

Foster’s 15 grandchildren have started to carry on his mission Lynn says, through a program where they learn about non-profits and become involved in charitable giving. Three of the oldest grandchildren have already begun to participate, she noted.

Emel Akan
reporter
Follow
Emel Akan writes about business and economics. Previously she worked in the financial sector as an investment banker at JPMorgan. She graduated with a master’s degree in business administration from Georgetown University.
SHARE
Friends Read FreeCopyFacebookTweet
You May Also Like