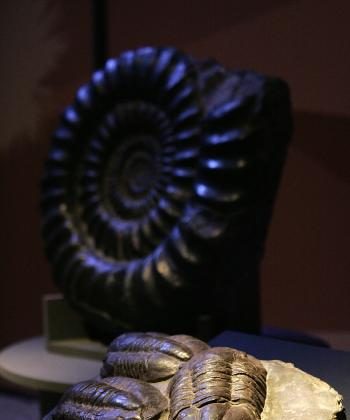 Fossils of three trilobites from Morocco on display in the exhibition 'America Migrante' (Migrant America) during the Universal Forum of Cultures Monterrey 2007, in Monterrey, Mexico, in October 2007. (Alejandro Acosta/AFP/Getty Images)
Beyond Science

The History Before History, Part I

It was a hot night so a man decided to take a walk along the beach. Soon after setting out, he felt a soft crunch under his foot. He stopped to inspect the soles of his shoes in the moonlight, and scraped off the remains of the unfortunate creature he had squashed. Unconcerned, he continued his stroll, unaware that the footprint had immortalized the end of that tiny life. After all, what’s so strange about stepping on a trilobite?

Approximately 320 million years ago, a species of small lobed creatures began to populate Earth’s seas. These relatives of sea arachnids—similar to lobsters and crabs—once flourished but became completely extinct 280 million years ago. We are talking, of course, about the trilobite.

The human being, as it is currently accepted by the majority of scientists, appeared as a species no more than 2 or 3 million years ago. And the history of man such as he is known today does not exceed 10,000 years.

With these dates in mind, we can conclude that the story of the human stepping on a trilobite belongs to the category of science fiction. A human being could never have squashed a creature that became extinct millions of years ago, and even less so a person with shoes—an unequivocal indication of civilization. This is evidence which defies history—an impossible fossil.

In June of 1968, amateur fossil collector William J. Meister found a rock 2 inches thick in Antelope Spring, Utah. With a blow of his hammer, he exposed the fossil of a human footprint. But this footprint had a special feature—a squashed trilobite. It wasn’t long before the news spread across the world, and several investigators made their way to Antelope Spring, finding more marks made by modern-style footwear in a geological stratum corresponding to extremely remote ages. What strange joke is seemingly being played on history?

In 1852 a giant rock mass in Dorchester, Massachusetts, was dynamited. After the explosion, workers found a curious metallic artifact among the debris, which was broken in two. Upon joining the two pieces together, they revealed a vessel in the shape of a bell with a base of 6.5 inches and height of 4.5 inches. Later they discovered that the vessel was made from a silver alloy. Curiously, this artifact, seemingly constructed with a high level of technology, appears to have been trapped in the rock while it was forming several millions years ago—when humans did not even exist.

Discoveries of this kind are not few. In fact, because of their ability to call in to question modern understandings of humankind’s origins, archeological sites have at times hidden various problematic objects.

Eight years before the discovery of the Dorchester vase, a perfect iron nail was found in a 24-inch slab of rock in a quarry in Kingoodie, Scotland. The point of this nail was sticking out of the rock, while an inch of it, including the head, was sealed inside. It is estimated that such a rock would have formed roughly 60 million years ago.

In the1880s, a Colorado rancher extracted pieces of carbon from a mineral vein 300 feet below the surface. Later at his house, as he was breaking up the extracted pieces, he found a strange-looking iron thimble. News of the discovery known as the “Thimble of Eve” spread quickly, but due to its state of corrosion and people’s over-handling, it disintegrated.

It is known that thimbles have been used by humans as far back as thousands of years ago. However, a curious detail in this case is that the carbon in which the thimble was found formed 70 million years ago, between the Cretaceous and Tertiary eras. According to modern understanding, the ancestors of human beings at this time were not even monkeys, but a different kind of small mammal, with protruding eyes, swinging between tree branches.

The “Cube of Salzburg” is another challenge to history. It was revealed to the public when in 1885 an Austrian iron smelter broke apart pieces of carbon and uncovered a cube-shaped iron artifact. “The edges of this strange object were already perfectly straight and defined; four of the sides were planes, while the two remaining sides, situated in front of each other, were convex. Halfway up was a deep slot,” wrote René Noorbergen, a specialist in these types of cases.

Chemical analysis later determined that the object did not contain any chrome, nickel, or cobalt, but instead was composed of a kind of forged iron. This composition seemed to rule out the hypothesis that the “cube” was a meteorite, as some had suggested.

Another archeological treasure hidden in a carbon deposit was found in 1891 by S.W. Culp, a woman from Illinois. While she was extracting the black material, she accidentally broke a fragment, and a very thin gold chain was knocked loose. It had been lodged inside a bow-shaped cavity in the carbon.

Another case, published in 1831 by the American Journal of Science, deals with a block of marble extracted from a depth of about 60 feet, which was later cut into pieces. The marble, believed to have formed millions of years ago, revealed precise cuts 2 inches by 0.5 inch—the shapes of the very similar modern letters “u” and “i.” The regularity of the symbols gave the impression of having been engraved by human hands.

A similar case was brought to light in 2002 in China’s Guizhou Province, where a broken rock was found to have, at first glance, perfect Chinese characters of inexplicable origin, considering that the rock dated back to 200 million years ago! This relic is known as “The Stone of Hidden Words.”

In 1976, a spoon that was first unearthed in 1937 inside a chunk of Pennsylvania soft coal was brought to public attention.

To rule out that such findings could be interpreted as a random occurrence, consider the 1967 discovery inside a Colorado silver mine: human bones alongside a 10-inch copper-pointed arrow. According to general estimates, the mineral deposit in which these were discovered is millions of years older than the human race.

While genetics and biology present us with new studies each day intending to validate the common origin of all species, new fossils continue to appear—more signs of a highly advanced distant past. Over time, these findings contribute to an understanding that human origins are far more remote than what is widely believed.

Perhaps the most controversial fossil in recent years was the one discovered by a geologist from the University of Jadaypur in Calcutta, India. A 1,100-million-year-old, reddish colored rock found in Madhya Pradesh, Chorhat, astonished scientists. It presents zigzag marks similar to those made by a worm.

The oldest known fossils of this kind are from Namibia and China, and the marks are understood to be from multicellular organisms, which made their appearance in the course of evolution approximately 600 million years ago. If the finding in India is properly interpreted, it would call for a serious reconsideration of the basis of evolution, giving a giant jump (400 or 500 million years) between this fossil and those found in Namibia and China.

“If you see centimeter-scale organisms and then don’t see them for 400 million years, you have a lot to explain,” remarks Harvard University paleontologist Andrew Knoll.

After new marks were found in similar rocks, many incredulous scientists were forced to analyze the age of the rocks again. But these specimens (zirconium crystals) continued to point to the impossible, making the issue “even more exciting and more improbable,” according to paleontologist Adolph Seilacher from Yale University.

Seilacher believes that, according to what is commonly accepted, it is impossible for these fossilized traces to be from animals. However, he adds: “At the same time, I must accept the evidence. I have not found, nor heard from another person, another explanation. Is there any non-biological explanation for these marks?” The study appears in the October 2, 1998 issue of Science.

In fact, there exist many fossils that challenge our modern understanding of history. An impression of a perfect human hand (with fingernail marks) was discovered in 110-million-year-old limestone in Glen Rose, Texas; a 100-million year-old petrified finger (fossil identified as DM93-083), which had its bone structure revealed through radiography, was found on Axel Heiberg Island in Canada; there is the well-known discovery of giant human footprints beside those of a dinosaur in Rìo Paluxy, Texas; and there are many more. The apparent soundness of our current theories is shaken each time an “impossible fossil” comes to light.